As far as I can tell, aviation piston engine power output is typically measured in HP (horsepower).

Automotive engine power output is typically measured by running the host vehicle on a rolling road, or dyno or dynamometer. This directly produces a torque curve, which may be integrated with respect to RPM to provide a power curve.

Obviously it wouldn't make much sense to put a piston-engined aircraft on such a device. Instead, how is horsepower measured for aviation piston engines?

Like anything else a Dynamometer is used except the engine is bolted directly to it (most likely on a test bench). In a car a rolling road is simply a way to couple the tires to the dyno without having to have any custom fittings. For what its worth cars lose a bit of horse power in the transmission/drive shaft/differential so shaft horse power and wheel horsepower are not always the same. However in a plane the prop is bolted more or less to the end of the crank (with the exception of some planes with stepper gear boxes). In any case shaft horsepower on a plane engine is more or less whats available at the prop.

Here is a lycoming engine on a dyno 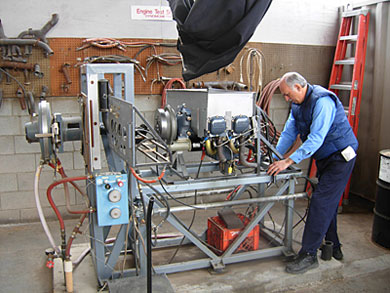 One idea is to use a "shaft power meter".

Not the answer you're looking for? Browse other questions tagged piston-engine measurement or ask your own question.

4
Why does this calculation show Gustave Whitehead's propellers were more than 100% efficient?