Why do glider licences have fewer restrictions than powered aircraft?

Under FAA rules a license for gliders doesn't require a medical certification and you can get your license at 16 rather than 17 for powered aircraft. You can get your student license two years sooner at age 14.

It appears to me that gliding would require MORE skill and experience than a powered aircraft. It looks very unforgiving. You only have one shot at landing, there is no go-around. If you lose too much altitude you could end up not being able to reach the airport. You have to know how to find thermals, etc to gain altitude. While being towed you will be flying in closer proximity to another aircraft than you normally would in a powered airplane.

Why are the restrictions less for a glider?

First of all, gliders fly slowly. Everything happens more slowly than in other aircraft, and this helps to make flying them less challenging than you might think. Flying them well is a different matter - this requires a lot of skill and good physical health.

Historically, the early age limits were introduced in Nazi Germany when the Deutscher Luftstportverband (DLSV) and later the NSFK organized groups of adolescents to let them build and fly gliders. Flight training started at the age of 14, mostly in very simple, bungee-launched gliders like the Zögling or SG-38 which were flown in summer and built or repaired in Winter. Since bungee launching is a very labor-intensive process and flights last only a few seconds, this was less about pilot training than keeping the young occupied and under the influence of the Nazi party. 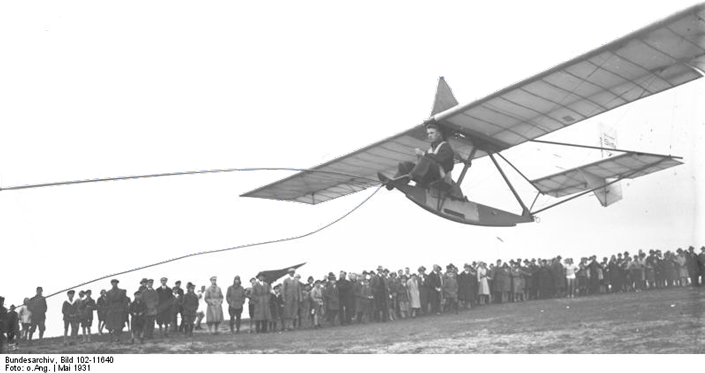 And it worked. Accidents did happen, but were almost never fatal since all operations happened at low speed and altitude. Therefore, these age limits were exported together with the idea of flying unpowered aircraft.

Note that in Europe the same health certificate is required for glider flying as for flying GA aircraft.

Now to your concerns about the demanding nature of gliding:

Not the answer you're looking for? Browse other questions tagged faa-regulations glider or ask your own question.

9
Can you fly an airliner without an ATPL?
36
Why does flying not have any age restrictions like driving does?
1
Aerodynamics and fuel consumption of a powered glider
10
How hard would it be to convert a glider into an powered electric aircraft?
3
Clarification on flight hours as compensation
4
How are electronic instruments and other equipment powered in a glider?
2
Why can't you have sail-powered airplanes?
5
Why require a minimum of 1500 hours to become an airline pilot?