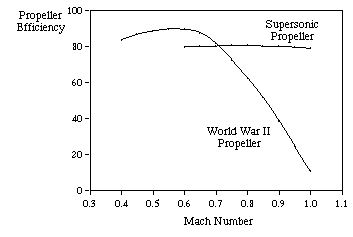 41
Could an electric engine provide the same performance as jet engines on current aircraft?
47
Why is the Tu-95 so efficient despite having propellers that spin faster than the speed of sound?
25
Given the same engine, why install a gearbox on a turboprop but not on a turbofan?
35
How does a fan differ from a propeller?
29
Are the fastest moving pieces of a jet engine supersonic?
27
What's P-Factor and why does it occur?
15
Did the XF-84H Thunderscreech really cause "900 sonic booms per minute"?
15
Do nacelles around aircraft engines help in reducing the engine sound?
9
Why do engine cowl lips appear larger and more blunt on the sides than on the top and bottom?
10
Can turboprop blades break the sound barrier?
See more linked questions

14
What's the difference between a two-blade prop and three-blade?
14
Why does the Cessna 172S Skyhawk use only two blade fixed pitched prop?
25
Why did WWII prop aircraft have colored prop tips?
7
Why weren't the rotor tips of the Djinn directly fed from the turbine's exhaust?
5
What causes the "growl" of some large turbofans at takeoff thrust?
1
Will the blade angle of a constant speed propeller be at its least angle (fine pitch) during full throttle and prop full?