What effect does cold weather have on helicopter performance?

At some point in the flight the rotor just stopped moving in mid-air and then I regained control back at ground level. I never had any issues before in warmer weather, so I assume it's a cold-weather related issue with this model.

This leaves me with two questions:

Cold weather definitely affects the performance of helicopters (as it does all aircraft), because it affects the density of the air they move through.

I will ignore icing so let's assume dry air.

The lift equation is:

Engines also operate more efficiently when the air is colder since the density is higher and the charge of air/fuel introduced into the engine is greater. (See here for more information.
Of course, this does not apply to your RCH apart from some effects on the efficiency of the batteries and motors (which may perform more poorly at lower temperatures).

So in general, the colder it is, the higher the performance. In most helicopters, the difference in performance on a cold, dry winter day is very noticeable and much better than on a humid, hot summer day.

It's also worth understanding the properties of air. The colder the air, the lower the dewpoint so the less moisture it can contain. Moisture in the air also lowers peformance.

The problems you encountered with your RC model aren't problems with helicopters in general.

Colder weather does not make you more susceptible to vortex ring state (aside from some minor side effects): You would still only descend into the vortex if you did not pilot the helicopter correctly. (Note that you cannot enter vortex ring state with the rotors stopped since they are not producing a vortex. Also note that on a real helicopter, if the rotors ever stop, they will not start again no matter what you do.)

First, I don't think cold weather had anything to do the stopping of rotor. Probably a malfunction.

However, Helicopters do face a number of problems during flight in cold conditions

Most of these have to do with icing and not with cold conditions as such. In fact, as Lift is directly proportional to density (L $\propto$ $\rho$), helicopters have better performance in cold weather (as air density is higher) and rotors produce more lift. Engine power is also usually increased. It is in hot-high conditions that helicopter lift production is critically affected.

I'm adding this as the question has been cleaned up and changed a bit (effect of temperature in helicopter performance).

The lift produced by the Helicopter blades is given by,

Now, in helicopters, $S$, the blade area, $V$, due to rotor speed are fixed. So, as the density varies (due to altitude or weather), the lift coefficient $C_{L}$ has to be adjusted by varying the angle of attack of the blade.

As the density decreases (due to hotter temperature or higher altitude), the required angle of attack (for producing same lift) increases. However, the maximum angle is limited by the blade stall angle. The net result is that the helicopter's ability to hover (or fly) at a particular altitude (or weight) is reduced due to change in temperature.

The following image shows the hover chart for CH-47D. It is obvious from the chart that the hover performance is significantly improved as the temperatures fall, at least till 0$^{\circ}$ 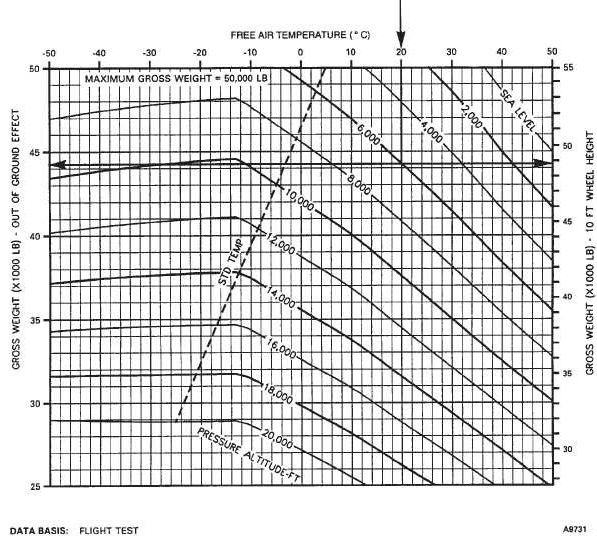 Besides the aerodynamic aspects of cold temperatues, there is another aspect concerning the thermodynamics of the engine. Power and efficacy are better the colder the air is.

However, in your RC model, maybe the clearance between some moving components is too small so they gall as the material expands at higher temperatures.

Not the answer you're looking for? Browse other questions tagged aircraft-performance helicopter temperature cold-weather or ask your own question.

24
How do modern helicopters tackle Vortex Ring State?
3
Has there ever been a report of a helicopter flying into a downburst?

12
Can a helicopter operate continuously in a small, enclosed, sealed environment?
2
Why do turbofan jets fly faster in cold weather?
9
Who has the responsibility to make altimeter corrections in cold temperatures?
8
Why is extreme cold weather a challenge at airports, since jets operate at extreme cold conditions in flight?
6
Why are engines with carburetors hard to start in cold weather?
5
What effect does wing loading (high and low) have on aircraft performance?
13
What options are there in Canada for treatment of severe depression and anxiety for pilots?
8
What effect does a direct crosswind have on takeoff performance?
2
At what bank angle does load factor's effect on performance increase?