What does the zig-zag pattern on Hawker Hunter's leading edge represent?

On some Hawker Hunters, there is a zig-zag on the leading edge of the wing, as shown below. 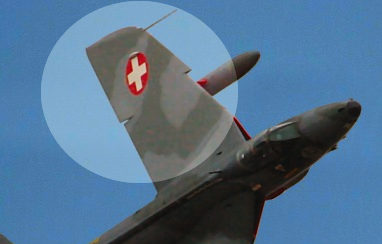 Why do only some Hawker Hunters have this feature, and what is it for?

After doing a little more research I found the answer.

A dogtooth is a small, sharp zig-zag break in the leading edge of a wing. It is usually used on a swept wing, but also on straight wings ("Drooped Leading Edge" arrangement), to generate a vortex flow field to prevent separated flow from progressing outboard at high angle of attack. The effect is the same as a wing fence.

Where the dogtooth is added as an afterthought, as for example with the Hawker Hunter and some variants of the Quest Kodiak, the dogtooth is created by adding an extension to the outer section only of the leading edge.

As already answered, the zigzag is a dogtooth extension or leading-edge extension on the outboard portion of the wing. It forces the airflow over the wing into a vortex, preventing spanwise flow outward along the wing at high angles of attack. A lot of modern designs incorporate them, including the horizontal tail of the F-15 Eagle, because they often have a side benefit of increasing airflow over the ailerons and increasing control.

To answer the second part of your question (why do only some Hawker Hunters have this feature?): the dogtooth extension wasn't incorporated into the design until the F.6 variant. Wikipedia's list of Hawker Hunter variants mentions it in a couple of entries.

Basically, the earlier models didn't have it; at some point the designers and aerodynamicists working on the Hunter tested it out. Once they figured out that it was an improvement, they would have made the necessary changes to the production line to make it standard on all late-model aircraft built.

Cirrus incorporates this design into their wings as well. Quoting from their site:

Update: The hawker hurricanes wings are better describes as dogtooth extension as flyingfisch points out.

These features are known as a Leading edge cuff and aims to reduce spin tendencies by delaying the onset of stall.

As an added piece of information, this feature may have something to do with the fact that the Hawker Hunter, for many years, was the only swept wing fighter that could be reliably recovered from an inverted spin.

For this reason the Empire Test Pilot School at Boscombe Down used one for advanced training purposes (and may still do so).

Not the answer you're looking for? Browse other questions tagged aerodynamics wing hawker-hunter or ask your own question.

19
What is the aerodynamic advantage to a cuffed wing like the Cirrus SR-22?
0
How many zig-zag patterns are there in a dog tooth leading edge?