What is the incidence angle of a propeller in the terminology of the Wright Brothers and how did they obtain it?

What is the angle of incidence of a propeller in the terminology of the Wright Brothers and how did they obtain it?

They measured what appears to be the static thrust and got:

Based on the assumption that the propeller can be modeled by a wing (Pitch = 15 deg, Surface = $2\ ft^2$, Lift = 18.75 lbf) having its entire area concentrated in a single point (called the Center of Pressure, C.P.) traveling at RPM = 245 on a circle with the diameter 0.824 x D, $V_{wing} = RPM \times \pi \times 0.824 \times D$, the Wright brothers evaluated its Drag and from Lift, Drag and Pitch using trigonometric relations they obtained the Normal (perpendicular to the chord) and Axial or Tangential (along the chord) components of Lift + Drag (the resultant force) and some angles related to them.

Now comes something I do not quite understand.

The two brothers calculated a reference force defined as:

Further, the Wrights divided the Lift by the Total Normal

The correspondence between the percentage 0.756 and the angle of incidence, 7¼, comes likely from a table like this (which is for a slightly different wing curvature):

Percentage of air pressure at various angles of incidence 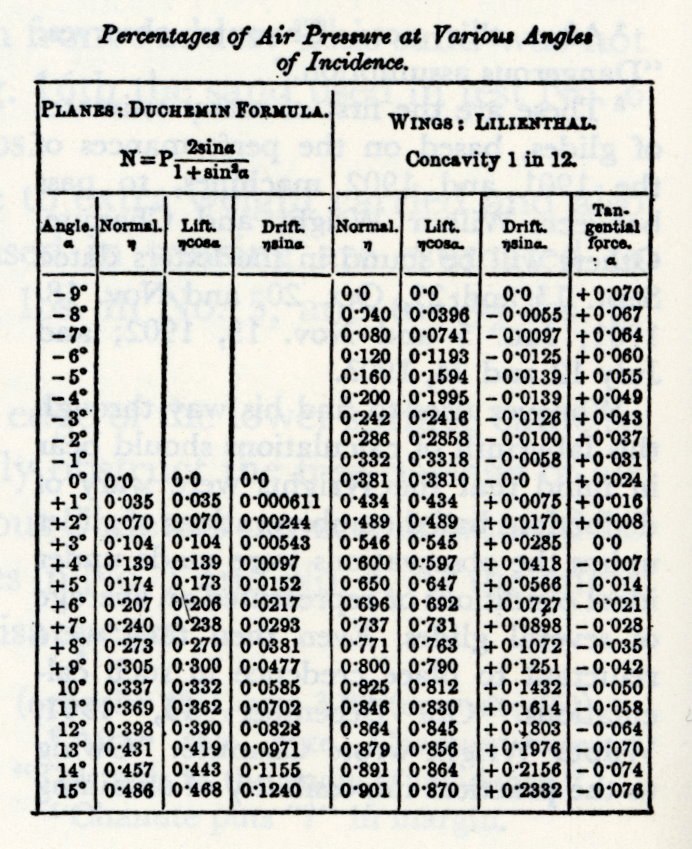 However, as the propeller did not move, the incidence angle of its equivalent wing appears to be identical with the pitch of the same wing and they are not. Why?

According to various scholars, the Wright brothers were referring to "angle of attack" when they used the term "incidence." They actually published an article by the same title, so the fact is well-established.

References include the following:

In Wilbur's time, the "angle of incidence" was what we now call the "angle of attack" -- the angle at which the wing of an airplane meets the wind (wright-brothers.org).

In the Wright's own words: "The lift is thus balanced against the normal pressure on the resistance surfaces ... Therefore, the lift ... at the given angle of incidence (angle of attack) is to the pressure on a square plane of equal area at 90° as the sine of the (...)

The angle of attack of a propeller is defined in various ways, a summary of which is here.

The angle at which this air (relative wind) strikes the propeller blade is its angle of attack.

Not the answer you're looking for? Browse other questions tagged aerodynamics propeller aviation-history or ask your own question.

9
Comparing the Lilienthal and Wright gliders, which one had a better glide ratio?
4
How did Wilbur Wright create and use the formulas he mentions in his letter to Octave Chanute?
5
Does Smeaton's coefficient have a modern accepted value or it is dependent of the air density?
5
Is this a good or a bad propeller?
4
What was the lift equation used by the Wright brothers?
2
Did the Wright brothers discover the three-axis control system for airplanes/gliders and the adverse yaw?
3
Would the front rudder of the Wright brothers really have helped in recovering the glider from a stall?
2
How can I calculate the relationship between propeller pitch and thrust?