How is ACS different from PTS and when does it replace PTS for FAA certification?

I've read some documents and articles that reference the FAA's new Airman Certification Standards (ACS) that will soon replace Practical Test Standards (PTS). What is different about ACS and when does it take effect?

The Airman Certification Standards (ACS) is basically an 'enhanced' version of the Practical Test Standards (PTS). According to FAA briefing on ACS,

It (ACS) adds task-specific knowledge and risk management elements to each PTS Area of Operation and Task.

In general, while the PTS concentrates on what the applicant must 'do', the ACS specifies what he/she must 'know' and 'consider' (in addition to the 'do' part) to qualify for a given airman certificate or rating. The differences (in draft) are shown in this slide. 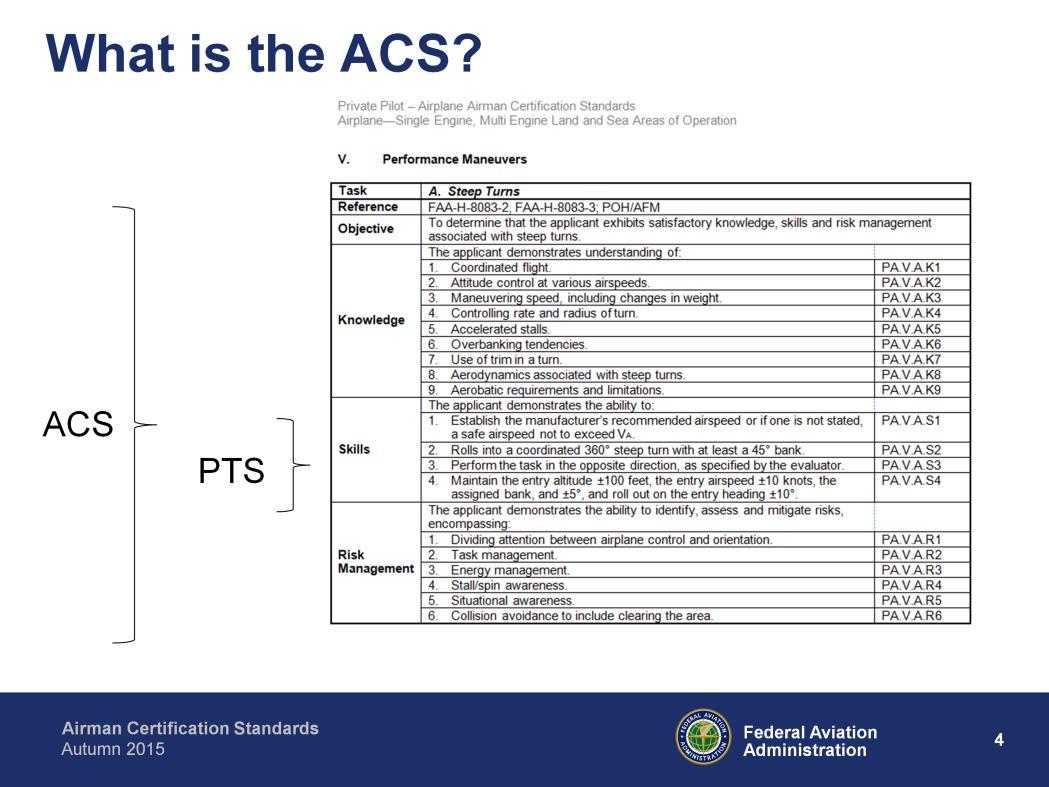 Image from Update on the ACS by FAA

According to the FAA briefing,

• The “skills” section of the ACS covers the flight proficiency performance metrics in today’s PTS.

• For each PTS Area of Operation/Task, the ACS lists the elements of aeronautical knowledge that support that skill.

• In addition, for each PTS Area of Operation/Task, the ACS lists the risk management elements or behaviors associated with it.

The ACS is still under development, but FAA is targeting a June 2016 implementation (for airplane) depending on results of prototype (there is one running at the Embry-Riddle Aeronautical University) and some other factors.

8
How much knowledge/experience can be transferred between different categories/classes of certification?
8
Will the new airmen certification standards make it more difficult to add ratings?
3
Can I do an instrument rating checkride in an experimental aircraft?
6
Does the FAA issue multiple physical certificates for different aircraft categories and privileges?
4
Slow Flight for CFI/Commercial Pilot - Should the gear be up or down?
10
What does the FAA mean by "Make and Model" of aircraft?
2
Does the FAA always require a neuropsychological assessment battery for applicants with a history of ADD?
19
FAA Aircraft Registration Form AC 8050-3 doesn't exist
1
What are the required CFI-A Initial Endorsements?
4
How many thousands of flight hours does it take to certify a jetliner?