At what altitude did Concorde go supersonic?

At what point during flight would Concorde go supersonic? Would it climb to cruising altitude first? Does altitude affect the transsonic difficulties (buffet, need for extra thrust, etc.)?

Concorde went supersonic during its climb phase to the cruising altitude.

As the air gets thinner during climb, the Mach number increases for same IAS, reaching around 0.93 at 25,000 ft and 0.95 at 28,000 ft. After this, the afterburners are engaged and autopilot is set to the cruising altitude (~ 60,000 ft). During this climb phase to the cruising altitude, the aircraft goes supersonic, settling at around Mach 2 at over 50,000 ft.

The flight envelope limitations of Concorde (at one configuration) is shown in this image: 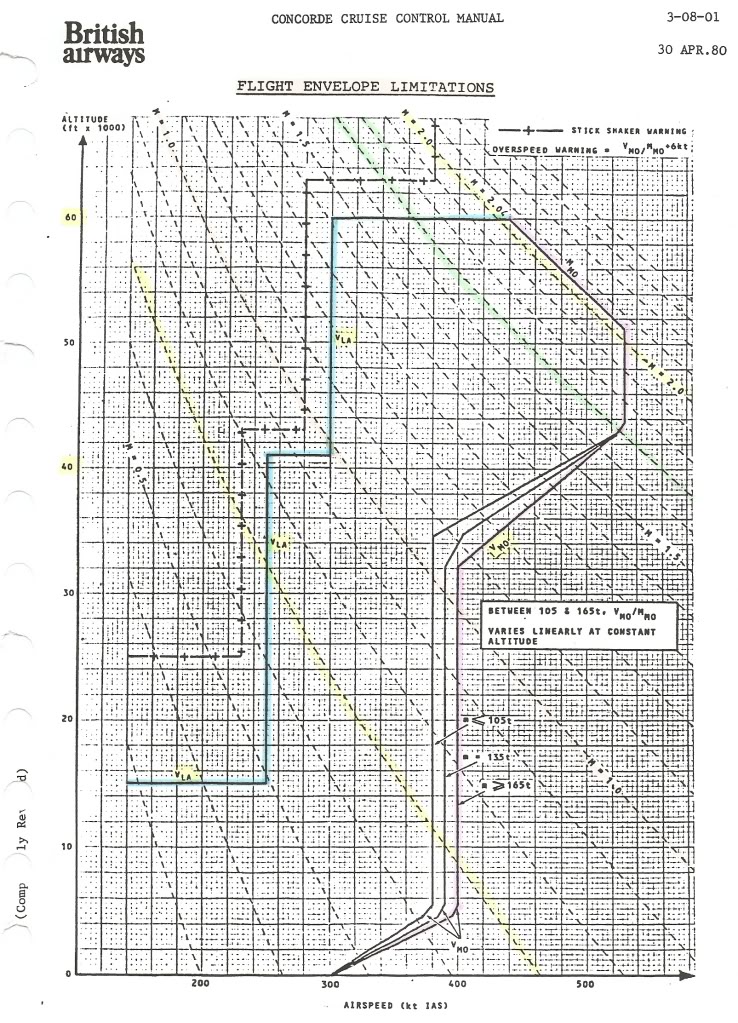 The altitude affected the thrust requirements, as more thrust is required for the same speed at lower altitudes due to density. This is one of the reasons for Concorde flying at altitude far above that of subsonic airliners.

Not the answer you're looking for? Browse other questions tagged supersonic concorde or ask your own question.

12
Can I simply use multiple turbojet engines to fly supersonic?

15
Why did the Concorde require a droop nose and how did it work?
10
What is the history of Concorde motto “May Concorde bring people closer” and medal?
5
What protection did the Concorde have against an uncontrolled decompression?
4
What were the effects of the oil crises on the Concorde ticket prices?
6
Do USAF fighter jets go supersonic over land?
3
Is there a limit to the possible altitude for electric jets?
29
Was the transatlantic crossing for Concorde too short to reach optimal cruising altitude?
4
Could the Olympus 593 have been windmill-restarted during supersonic flight?
4
How do a narrow airframe and canards keep supersonic shock waves from coalescing?
6
How high could Concorde potentially reach by going fast and pulling up?