Is there a boomless sonic technology in any state at this time?

I've heard rumors about airplanes being on the horizon with "boomless sonic" technology, or the ability to fly supersonic without creating that hazardous shockwave.

This would be very valuable for business travelers who want to cover populated areas at high speed. These aircraft would presumably be certified to fly at supersonic speeds where it is now forbidden due to the damage of sonic booms.

Does this technology exist? Is anyone on the trail to making this work? Is it even possible?

Shock wave is a physical phenomenon and as such is unavoidable. The best we can do is to reduce their intensity and reduce their effects on ground.

A method to eliminate the shock wave (theoretically) was proposed by Adolf Busemann. His airframe, called the Busemann's Biplane which consists of two triangular cross-section plates a certain distance apart (so that choking is prevented) with the flat sides parallel to the fluid flow.

The idea is that the shock waves are formed internally between the two (triangular) 'airfoils' and cancel each other out at design condition, shown in the first case. 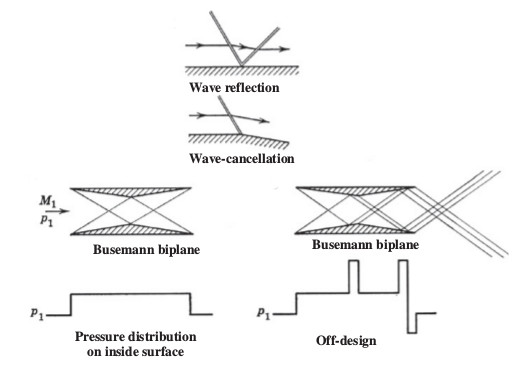 At off design conditions, shock waves are produced. However, this doesn't produce any lift at zero angle of attack, as is obvious. As researchers explain,

... the design lacks lift: The two wings create a very narrow channel through which only a limited amount of air can flow. When transitioning to supersonic speeds, the channel ... could essentially “choke,” creating incredible drag. While the design could work beautifully at supersonic speeds, it can’t overcome the drag to reach those speeds.

Research is being carried out to overcome this issue- One method proposed is to have the wings 'morph' shapes- so that they are efficient at all speeds. Another group is working to optimize the shape of the airfoils in Busemann's Biplane so that the shock-wave is reduced at all stages of supersonic flight. However, all these studies are in conceptual stage and no experiments have been carried out so far.

NASA carried out the Shaped Sonic Boom Demonstration(SSBD), in which the fuselage of a Northrop -5E was modified (kind of like pelican's beak) so as to change the pattern of shock waves formed in supersonic flight. 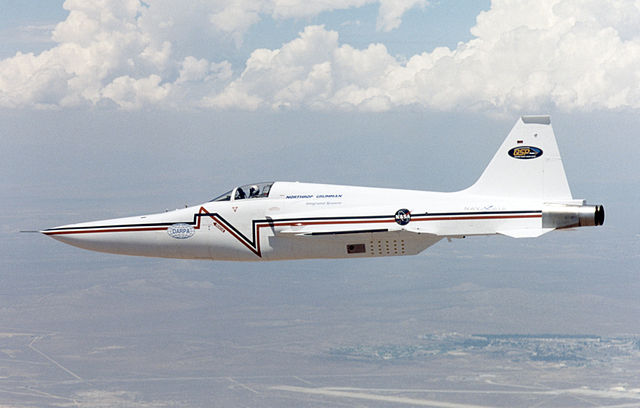 NASA reported that the modifications were able to reduce the intensity of the shock wave by a considerable amount, as shown in the image below (the 'flat' pressure line is from the SSB demonstrator). 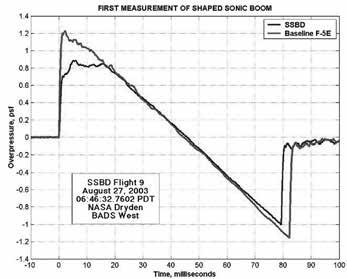 Active research is still being carried out by various organizations in this field.

Yes, there is this technology already. By using the fact that the speed of sound is proportional to the square root of the air temperature, you can fly at a low supersonic speed at altitude and no shock wave would hit the ground. If the Mach number is low enough, your speed will be subsonic in the air at ground temperature, so the shock waves will dissipate on their way down.

But the speed gain would be low and the whole endeavor not very economical. Once the flight speed is increased such that it is also supersonic at ground conditions, audible shock waves will be hard to avoid. They can be mitigated, but not completely avoided.

I recently saw something like this in a document about a supersonic concept plane (by boeing or airbus, I don't remember)

The main part here was that it isn't really the airplane that is "boomless" but rather that it is capable of flying a "boomless" (note the quotes i'll come back to it) flight profile.

The "boomless" profile they described incuded transitioning to supersonic in near vertical flight (under the power of rockets/ramjets), spreading the shockwave in the horizontal plane, giving it time enough to dissipate energy before it comes near the ground.

So basically it comes down to a near vertical climb and high altitude flight.

Now, these are really just a collection of stuff I have read and I am not an expert and I am writing these from vague recollection, so errors can be expected. Corrections welcome. Still thought it makes sense for me to write these, as it seems to me this type of concepts is what the question was about. These are what is usually meant when "boomless supersonic" is talked about.

Simplest way is to fly high. Lower air density means lower energy density in the boom. And greater distance means more energy will be dissipated before ground. People are always making concepts about sub-orbital shuttles that would be some where between Concorde and a ballistic missile. Would generally require a new type of engine to be practical.

It is possible to attach a boom ahead of the fuselage which will have its own smaller sonic boom. This will reduce the intensity of the sonic boom of the fuselage and the sum would be smaller than without the boom.

You can use the sonic boom and thus absorb a part of its energy.

You can use it to create compression for the engines. Basically you would trap the shock wave with the engine intakes. There would be drag and hard to imagine the same engines working well subsonic. And it would be hard to combine with generating useful lift. Also while using compression from the fuselage is normal, actually capturing the sonic boom would require the intakes to be close to the front, which would cause problems with engine design.

You can use the energy of the shock wave to generate lift. More lift you generate, less will be left to annoy people on the ground. Basically you shape fuselage to generate more of the shock to the sides and attach to the wings a surface at an angle that reflect the shock wave downwards. Reflecting energy down will create lift. You can also have a fuselage that directly generates downwards shock waves, but in several steps for greater lift and less noise. A downside of such waverider concepts is that they only really work in supersonic, I think even a specific range of supersonic. So until you reach correct velocity you'll only have more drag.

0
How could aerodynamicists reduce the intensity of the sonic boom?
7
Could Mach 1.4 be a better design point for SST?
0
How to reduce the noise of the supersonic passage(bang)?