Why did the YF-23 never enter service?

The YF-23 was one of the most stealthy aircraft of all time and had a range capability of 2,000 miles (that's more than some airliners can travel) but never entered service. The F-22, has high maneuverable, and is considered to be the second option compared the to YF-23 stealth and speed. So why did the YF-23 never enter service? 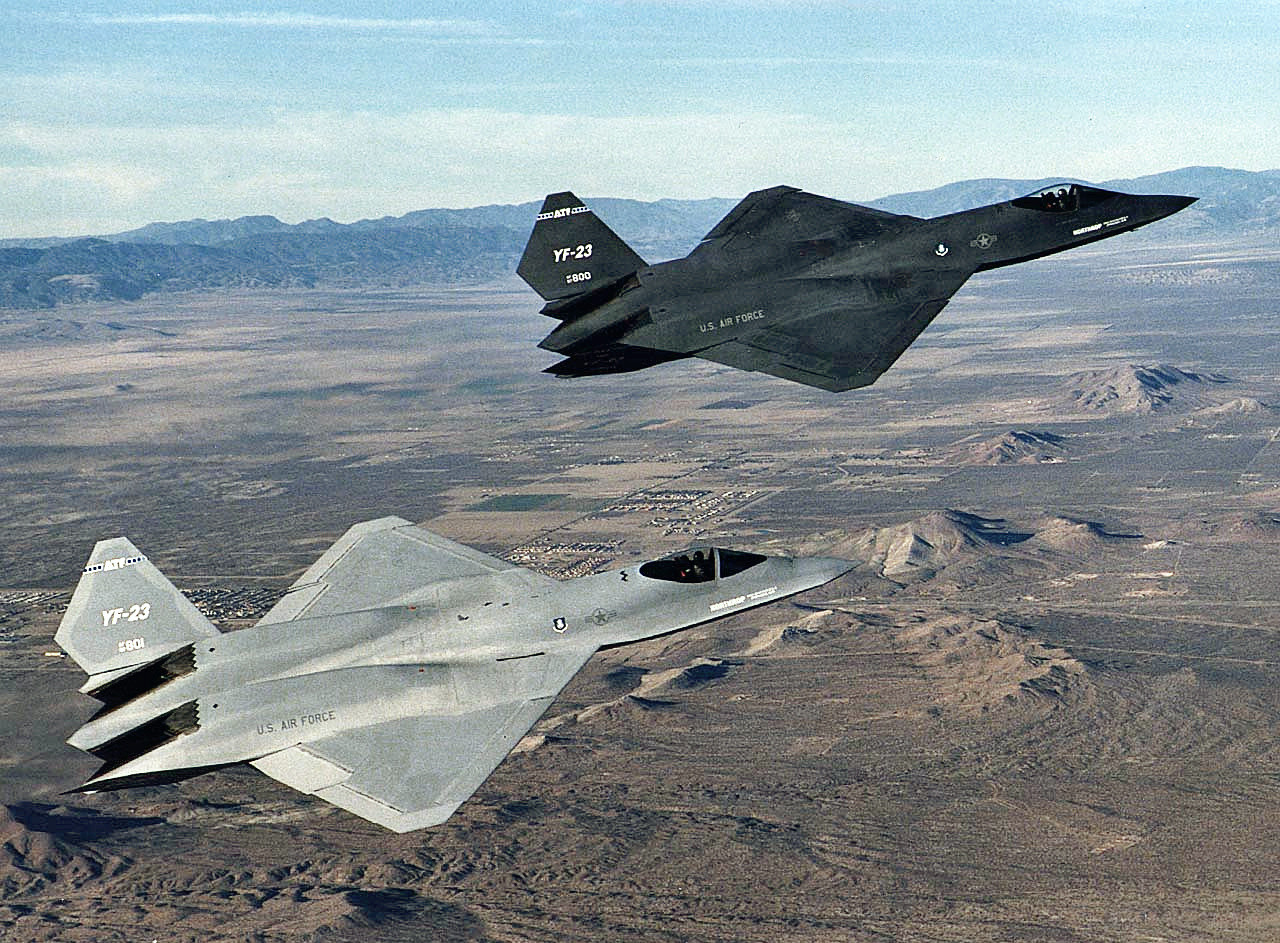 The YF-23 lost the Advanced Tactical Fighter program to the YF-22, however it has not been made public why. The ATF evaluation is still classified and details about the YF-23's performance are not easy to come by. They are both excellent aircraft, performed similarly, and there is much speculation why the YF-22 won.

According to the Air Force, factors in the selection for production of the F-22 were a better designed for maintainability, greater potential for future development, and slightly lower cost. Secretary of the Air Force Donald B. Rice stated that the choice was based on confidence in the ability of the Lockheed team and Pratt & Whitney to produce the aircraft and its engine at projected costs. Emphasizing the importance of the Lockheed team's management and production plans, he denied that either prototype was significantly more maneuverable or stealthy. A popular view is that the decision reflected a preference for maneuverability over stealth

A derivative of the YF-23 was proposed for the 2018 Bomber, but that idea died when the program was cancelled in 2006.

Because the YF-23 lost the Advanced Tactical Fighter program to YF-22, from which F-22 was developed.

Actually, the YF-22 had thrust vectoring and was the more agile of the two.

The Advanced Tactical Fighter (ATF) competition was different than some of the other fighter competitions. The planes never squared off in any kind of mock combat. The pilots who flew the YF-22 never flew the YF-23 so there was no way to directly compare the 2 in that way. The competition focused on whether or not the planes met the requirements. Both aircraft met the requirements so the decision is said to have come down to assessments of the ability of the competing contractors to deliver the aircraft. Northrop was busy with the B-2 and the YF-22 was thought to be more fully developed and more ready to turn into the F-22. Some have claimed that Lockheed made a better sales pitch. It should be noted that the YF-23 could carry 4 AMRAAM internally while the YF-22 could carry 6, which may have factored into the Air Force decision.

The decision was non-technical

You can hear it from the test pilots themselves:

The rating was actually based on stop lights. Individual requirements (e.g. supercruise) could be rated red, yellow, or green. At the end of the test program, both planes rated green on all requirements. This was all Secretary of the Air Force Donald B. Rice had been given to decide. So the decision had to be made on a non-technical base.

Rice had more confidence in the project management of Lockheed (this is consistent with the Global Security quote in Schwern’s answer). He was probably strongly influenced by the fact that

The YF-22 was probably not more maneuverable

There was never a pilot to fly both planes, intentionally. YF-23 test pilot Paul Metz, however, switched to Lockheed after the end of the program to fly the first production F-22, so he’s probably the only person entitled to compare them at least to some degree.

In the above video he states that the YF-23 “would stand side-by-side with anything else and […] exceed the capabilities of anything else” (51:03). Here, anything else sounds like it’s pointed towards the YF-22.

Thrust vectoring had no influence on the decision

There is no proof that the YF-23 was faster

Top speed of the YF-23 is entirely speculative:

There is no proof that the YF-23 was more stealthy

There is a hearsay story that a general couldn’t believe the low RCS of the YF-23 mockup. Good luck finding a reliable source.

Please consider that stealthiness is not a one-dimensional quantity. See here or here – there is no easy decision, even with exact numbers (which are classified for the YF-23).

I recommend watching the above video, the explanations are pretty clear and the knowledge is first-hand.

Officially both aircraft met or exceeded the government requirements set by the ATF program office, but the Lockheed jet won out in the end of the ATF program.

The reasons why are a strange combination of Pentagon politics and little showmanship on the part of Lockheed.

At the time of the ATF program, Northrop was in the doghouse with the Pentagon due to program delays and cost overruns on the B-2 Stealth Bomber program, which made ATF program managers skeptical of Northrop’s proposed program timeline and budget numbers submitted with their ATF proposal.

Midway through the ATF flyoff, the Navy inexplicably added an additional requirement to the program that they wanted to evaluate the ATF prototypes to create a naval variant as a replacement for the F-14 airplane. This requirement was added after both ATF designs had passed CDR and parts were being cut for both aircraft. The Navy evaluated both designs and felt the F-23 would have been unsuitable for carrier operations.

In addition, USAF commanders were not totally convinced of the merits of stealth and BVR air warfare at the time of the ATF program. Many had been pilots who had flown in Vietnam and had to deal with the shortcomings of fighting small, maneuverable MiGs in big, powerful Phantoms with out a gun. The experiences had led to the development of airplanes like the F-15 and F-16 with suberb dogfighting capabilities. Leaders did not want to stray from this winning formula, particularly given just how successful it had been against modern Soviet hardware in Operation Desert Storm and were more skeptical of an aircraft which relied heavily on stealth for defense and attack. This is not a terribly fair perception; the YF-23 was a very agile airplane, particularly in the transonic and supersonic regimes of flight. But the Air Force was more interested in an advanced F-15 with stealth characteristics, which is what Lockheed perceived and delivered with their proposal.

Finally Lockheed laid in a little showmanship with it proposal which included sorties where their jet launched missiles, giving the fallacious impression that their design was much closer to combat ready than the Northrop proposal.

Not the answer you're looking for? Browse other questions tagged experimental-aircraft yf-23 or ask your own question.

8
Why does the F-22's wing give it such great maneuverability?
12
Why is the F-35 engine nozzle exposed?
7
Is there a way for an ultralight or powered glider to smoothly enter a jet stream?
8
Why was the experimental MiG 1.44 so similar to the experimental TKF-90?
14
Why was the Sukhoi Su-47 Berkut never adopted for service?
0
Why does the Aurora D8 have vents on the bottom of its fuselage?
9
Why did the AvroCar fail to fly above 3 feet?
3
Does/did Russia or the Soviet Union ever fly rocket planes?