I know that early planes like those built by Santos Dumont and the Voisin brothers used canard wings but who invented the canard wing?

The plane built by Hiram Maxim and tested in 1894 had a canard wing for pitch control. 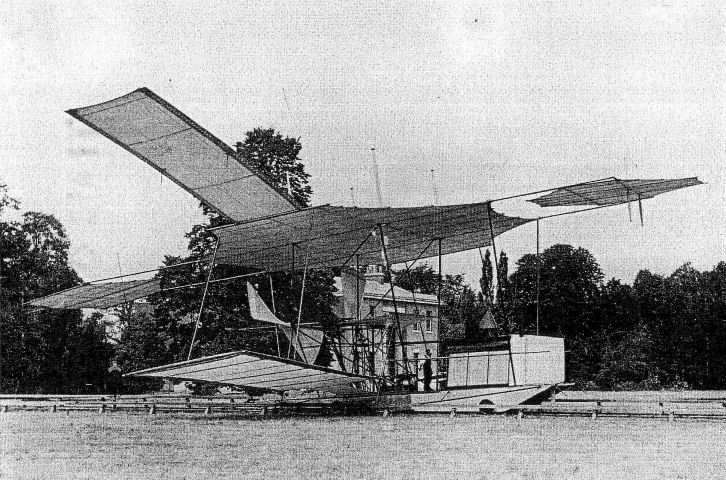 So, it is quite evident that this type of wing was not invented by the Wright brothers as some people believe.

Short answer? The Wright Brothers. The term was coined to describe the Santos-Dumont 14-bis, as its design with a box-like array of forward control surfaces looked like a duck in flight, but the very first successful powered aircraft was a similar canard biplane with a pusher engine.

As planes developed after the Wrights' first flight, this design fell out of favor for a number of reasons. To save weight, the horizontal and vertical stabilizers were grouped together so a single set of braces could support them, and when this arrangement was forward of the wings in the most logical pusher configurations of the day, the planes had a general tendency to nose away from the relative wind, which caused issues with takeoff and landing as well as unrecoverable deep stalls as the plane kept its nose high or even swapped ends in a stall.

These behaviors led to the concept that's familiar to us today, of a central barrel fuselage with the engine and prop in front, the pilot behind that and an "empennage" of horizontal and vertical surfaces in the rear. This arrangement allows for better stability and easier recovery from stalls by having the empennage point the nose into the relative wind, much like a weathervane. The downwash of air over the horizontal stabilizers also allowed that stabilizer to have a reduced pitch angle, reducing drag. These and other advantages led to the arrangement becoming dominant in aircraft design as of WWI (with a couple notable derivations in the early war, like the D.H.2 "pusher" which allowed a machine gun to be mounted along the pilot's line of sight before the invention of the synchronization gear) and continued into the second and third generations of the jet era.

The return to a "pusher"-style powerplant with the modern turbojet led to a revisit of the idea of a forward horizontal control surface. The design has a few advantages, especially in combination with a delta wing which became common on the second-generation supersonic jet fighters. Canards provide a lift force in the direction the pilot wishes the nose to go, instead of opposite that direction, so when pulling up, the canard adds to total lift. Canards also allow the primary pitch surfaces to encounter relatively undisturbed air, as opposed to a tail-mounted stabilizer, which increases the effectiveness of the surface. The larger rearward delta wing acts as the "empennage" of a traditional plane would, helping keep its nose in the wind, and the vertical stabilizer remains at the rear of the plane, avoiding the shortcomings of early canard designs.

Several experimental designs were tried as early as the war years, but the Saab Model 37 "Viggen" was the first aircraft of the modern era to use a canard-delta planform configuration, in 1967. This design has since become a favorite of European designers, with the Gripen, Typhoon and Rafale all following this basic configuration. The Russians have incorporated canards into a few of their fighters like the Su-30 to augment a traditional all-moving tail elevator, and the PAK FA has a similar concept with movable "leading edge root extensions". American designers have played with it, in programs like the F-15 ACTIVE tech demonstrator and the XB-70 prototype hypersonic bomber, but the sole production U.S. aircraft to use canards does so mainly for stability; the B-1B Lancer has a small pair of canards linked to the FBW system which dampens oscillations in the forward fuselage.

Not the answer you're looking for? Browse other questions tagged aviation-history canard or ask your own question.

4
How did Wilbur Wright create and use the formulas he mentions in his letter to Octave Chanute?
6
What is the incidence angle of a propeller in the terminology of the Wright Brothers and how did they obtain it?
10
Who invented the cabin chime? What aircraft was the first to use it?
5
Was the adoption of conventional tailplanes as 'everyday aircraft' inevitable, or are there other designs that can be just as good?
4
Identify canard, low-wing, single pusher-prop plane over Upstate NY
2
Did the Wright brothers discover the three-axis control system for airplanes/gliders and the adverse yaw?
1
Is there any clear picture or drawing, of a Wright brothers' plane, published before August 12, 1908?