I find myself thinking often, if the seatbelts in airlines are designed just to keep the passengers in seat or to really act as a safety belt like in cars, because in cars which go at 300kmph speed, you have the 5 point seat belt. Why isn't similar approach used for airlines, where the risk is too high.

Plus articles like these, suggest heavier / obese passengers are at more risk.

For a proper answer we first need to define what "safe enough" is. If you want a significant reduction in risk over current standards, improving the restraint will not be enough.

Your observation is absolutely correct: The lap belt is the minimum the airlines get away with, and you would be much better protected in some kinds of accident by a proper 5-point harness. But fitting the harness alone will not achieve much: To stay in place in a crash, all seats need to be reinforced, so they can tolerate the increased loads at the shoulder belt attachment points. This will add weight and cut into the profits of airlines, so it will only happen when it is mandated.

Please read this answer for more details. It concerns GA aircraft, but much applies to airliner seats as well. The better the restraints are, the more deceleration load can be survived. Note that the points in the Eiband diagrams shown in this answer are from tests with additional leg, chest and arm restraints. If all you have is a lap belt, you might probably be able to tolerate only half as many gs.

The better alternative to a 5-point harness would be to turn around all seats. This would help most to reduce injuries and improve chances of survival in a crash landing.

Now I have to contradict @FreeMan: While the brace position will put all the load on a small strip around a person's hips and lets the arms flail forward, a properly secured torso can take 10g for a duration of more than a second and up to 40g momentarily without ripping the head off. See below the famous sequence of Dr. John Stapp in a ride on his rocket sled "Sonic wind": 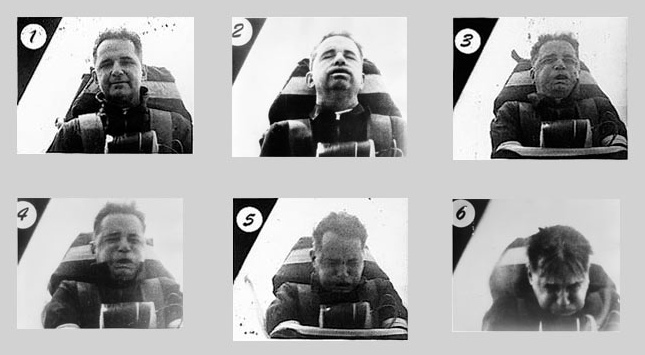 He clearly had his head bobbing about, but even though he lost dental fillings and suffered hemorrhage in his eyes, the head stayed intact.

In the end, all what the lap belt is really good for is to keep you in your seat with negative acceleration due to gusts. This is by far the most common situation when a restraint is needed. The classical brace position (torso over legs, head down) is impossible anyway in economy class due to the ever reducing seat pitch.

Not really, the current seat belt standard is aimed mostly to protect against aircraft movements encountered in flight, not during impact which are very uncommon, contrary to automotive industry.

Current FAA regulations impose the seat and seat restraints to protect from 16g deceleration using a complex test scenario and simpler 9g test (only the latter before 2009). Some seat belts are fitted with an airbag that expands forwards.

With a passenger not keen on taking time to understand and adjust a harness, and not willing to remain restrained by a harness for a long time, the compromise is to have a simple belt for flight turbulence, and use the brace position against impact, albeit:

Three-point diagonal seat belts, which don't have this problem, are used for helicopters and light aircraft, but are not seen in airliners because the upper anchoring point is not easily available.

Torso restraints are mandatory for the attendants in the US, but attendants are trained to make them effective and are expected to take the time to adjust them correctly so that actual additional benefits over the lap belt can be obtained.

In accordance with § 121.311(g), each seat occupied by a flight attendant required by § 121.391(a) must have torso restraint (a combined pelvic restraint and double strap upper torso restraint with a single point release) that meets the requirements of § 25.785, except that any combined safety belt and shoulder harness approved and installed before March 6, 1980, may continue to be used.

I would postulate (but have no firm evidence to prove the point) that the brace position is actually safer than a 5-point harness would be for passengers in an aircraft accident.

Why do race drivers wear a 5- or 6-point harness then? They also wear a HANS device which effectively "seat belts" their head to the car, as well. The HANS device leaves their head with 1-2 inches of forward movement and absorbs the stress of impact* with tethers designed for it.

*One recent F1 accident saw impact forces upwards of 25G. The driver unbuckled himself and got out of the car while the track marshals were still on their way. I'm sure he was sore, but was really no worse for the wear.

The short answer is that current airline seats and seatbelt systems are pretty safe when used in accordance with their design criteria. They are not merely decorative - they are tested and proven safety devices.

The longer answer requires looking at the regulations and understanding what the seat/seatbelt/aircraft interior design as an overall system is intended to do for passengers in the event of an incident.

The current seat belts on FAA-certificated transport-category (airliner) aircraft are governed by FAR 25.785.
I've excerpted a few relevant bits of that regulation below.

Each seat, berth, safety belt, harness, and adjacent part of the airplane at each station designated as occupiable during takeoff and landing must be designed so that a person making proper use of these facilities will not suffer serious injury in an emergency landing as a result of the inertia forces specified in §§25.561 and 25.562.

Straightforward enough: "If we crash people sitting in the seats shouldn't suffer serious injury."
The loads the seats and seat belts must withstand are, in part, described in FAR 25.561 and 25.562 which deal with emergency landing conditions - among the requirements are for the seat and seat belt to handle a 9 G forward load with FAA-Standard 170-pound adults.

The 170-pound adult certification criteria is why you will find discussions about how larger/heavier individuals are "less safe" -- a heavier individual will impose more load on the seats, seat belts, and attachment points, and may exceed the ultimate limit load of an approved seat/seat belt design.

In plain English: "Either you need to be secured with a shoulder harness so you can't hit anything, or the seat in front of you needs to be soft and padded so it won't crack your skull open and kill you when you're in the brace position."
(This is the same logic used in school busses: Rather than strapping every passenger down with a 5-point restraint we make sure they'll stay in their seat and everything they can hit from a seated position is soft enough that it probably won't kill them.)

Each seat or berth, and its supporting structure, and each safety belt or harness and its anchorage must be designed for an occupant weight of 170 pounds, considering the maximum load factors, inertia forces, and reactions among the occupant, seat, safety belt, and harness for each relevant flight and ground load condition

i.e. "In a worst-case crash a FAA-Standard 170 pound adult shouldn't break the seat or rip the seat belt out of the attachment points." as I described earlier. In practice the regulation sets a minimum standard, and most seats will withstand more force than that.

Aircrafts' seatbelts are for security reason. And yes, security while flying is "just to keep the passengers in seat" in case of a void or, on ground, in case of a bump or the plane leaning.

Apart from that cases, there is no need for a complicate 2/5/10k point system in an impact against a mountain: you will be just plain dead anyway.

Not the answer you're looking for? Browse other questions tagged aircraft-design safety seats or ask your own question.

1
Why don't plane seats have shoulder straps?
59
Even after years of research, why are planes unable to keep passengers alive in case of a fiery crash?
30
Why are passenger seats not facing backward on an airplane?
17
What is the brace position in light aircraft like a Cessna?
22
Would a roll cage plus a safety harness make a small GA aircraft accident more survivable?
19
Does a prone position for the pilot minimize g-force effects?
24
Why is the seat belt mechanism on airplanes so different from the the one on cars?
10
Is it practical to install seat belts in airline lavatories?
9
Is a "breakover feature" required for airliner seats?

99
Why are the cockpit controls of airplanes so complicated?
19
Is it technically viable to reintroduce sleeping berths?
8
What do pilots do to prevent DVT?
11
When did airlines start using seat belts for passengers?
23
Don’t seats that recline flat defeat the purpose of having seatbelts?
6
Reclined seats for take off and landing
2
What is a "Standard visual inspection"?