Is skydiving not NOTAMed in the US?

Recently there was a mishap at South Lakeland Airport in Mulberry, Florida where a Cessna 170 collided with a skydiver. Luckily all involved suffered only minor injuries. As far as I know, skydiving in Germany must be NOTAMed, is this not the case in the US?

The incident was caught on a series of stills: 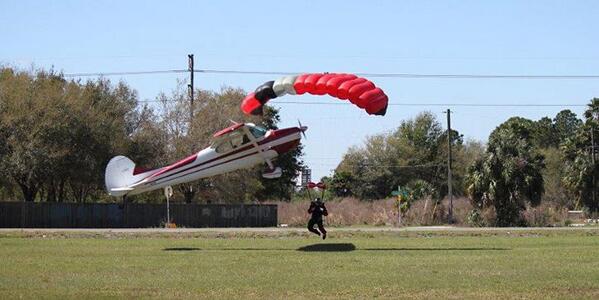 There is not a requirement for a NOTAM, but since this happened at an uncontrolled airport the nearest ATC facility must be notified at least 1 hour in advance but not more than 24 hours in advance and, they must have approval from airport management.

Then for the actual jump, ATC must be notified at least 5 minutes prior to jump via radio from the aircraft.

§105.23 Parachute operations over or onto airports.

(a) For airports with an operating control tower:

(1) Prior approval has been obtained from the management of the airport to conduct parachute operations over or on that airport.

(2) Approval has been obtained from the control tower to conduct parachute operations over or onto that airport.

(b) For airports without an operating control tower, prior approval has been obtained from the management of the airport to conduct parachute operations over or on that airport.

(c) A parachutist may drift over that airport with a fully deployed and properly functioning parachute if the parachutist is at least 2,000 feet above that airport's traffic pattern, and avoids creating a hazard to air traffic or to persons and property on the ground.

(1) Over or within a restricted area or prohibited area unless the controlling agency of the area concerned has authorized that parachute operation;

(2) Within or into a Class A, B, C, D airspace area without, or in violation of the requirements of, an air traffic control authorization issued under this section;

(b) Each request for a parachute operation authorization or notification required under this section must be submitted to the air traffic control facility having jurisdiction over the airspace at the first intended exit altitude and must include the information prescribed by §105.15(a) of this part.

(d) Paragraph (a)(3) of this section does not apply to a parachute operation conducted by a member of an Armed Force within a restricted area that extends upward from the surface when that area is under the control of an Armed Force.

Even more information is available in AC 105-2E.

Not the answer you're looking for? Browse other questions tagged usa skydiving notam or ask your own question.

12
What happens if a parachute does not open while skydiving?
7
How does skydiving flight cause shock cooling?
5
What is the maximum altitude a skydiving plane can fly?
14
What is the purpose of D-Bag in skydiving parachute?
21
Is skydiving in IMC (through clouds) legal and safe?
9
What is the difference between Distant (D) NOTAMs, Local (L) NOTAMs and FDC NOTAMs in the US?
5
Can you file a flight plan to an airport whose runway is NOTAMed closed?
1
Are there any safety data on the aircraft used for skydiving?
0
What should I expect to happen when I get on a skydiving flight
3
Is a French PAC skydiving license equivalent to an AFF license?