What exactly does the term "fly-by-wire" mean? Where did it originate? I understand that it refers to control systems. If an aircraft is not fly-by-wire, what is it? That is, what are the alternatives?

The fly-by-wire means that in the aircraft, the (pilot or autopilot) control inputs are fed to the (flight) computer, which processes them and determines the required control surface movements and transmits this by electrical signals (through wires, hence the term fly-by-wire) to the appropriate actuators.

This is in contrast with the mechanical system, where the pilot control inputs are directly transmitted to the flight control actuators, through push-pull rods or cables. The following figure shows the schematic of a mechanical and fly-by-wire system. 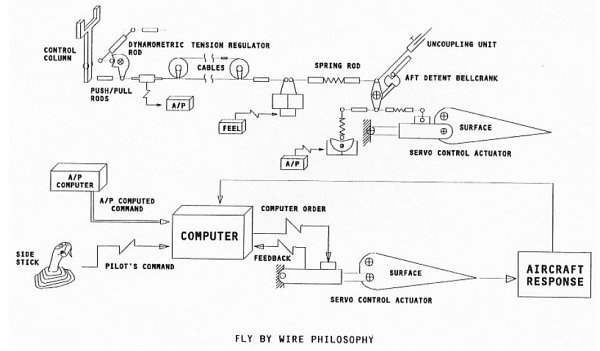 The first aircraft to use this mode of control was the Avro Arrow, which used a dual-channel fly-by-wire system made of analog circuits. The flight control mechanism on the Apollo Lunar Module was fly-by-wire, the Primary Guidance, Navigation, and Control System, which was referred to as PGNCS, pronounced 'pings'.

Later, NASA tested the fly-by-wire system in a F-8 aircraft, a schematic of which is shown below. Note that it uses Apollo flight computer. 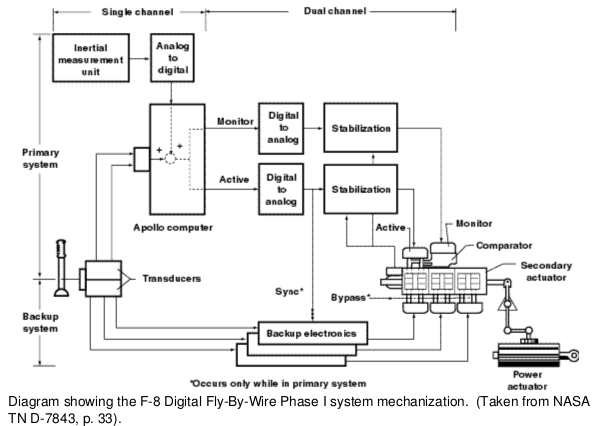 As an extension, the system is called fly-by-light (or fly-by-optics) is the signals are transmitted through optical cables. If the wires are eliminated altogether, it is called fly-by-wireless.

Fly-by-wire means that the control commands travel by wire to the control surfaces. There, either electric motors or hydraulic actuators do the physical work of moving the surfaces. The pilot has either a conventional control column or a side stick with transducers which will encode the commands of the pilot into electric signals. Optionally, a computer can be employed to modify the signals such that overload conditions or dangerous maneuvers are avoided.

Other control systems can be summed up as mechanical: Some pushrod or steel cable runs all the length to the control surface. To relief the pilot of the mechanical work, those pushrods can be boosted by hydraulics, so the mechanical movement of the control column or stick will become a command for the hydraulic actuator, similar to the electric signals in a fly-by-wire system. Early systems used a variety of aerodynamic means to lighten control forces, and small aircraft have low enough control forces that they can be flown with a direct, unboosted mechanical linkage. In some cases, it is even necessary to artificially increase control forces to give the pilot enough feedback.

Russian combat aircraft prefer to use pairs of steel cables over pushrods because they will be more resilient when hit by a bullet. Also, most early aircraft used cables for weight reasons. Today, pushrods are preferred because they allow a stiffer linkage and less friction.

Regarding the history of fly-by-wire, I could just copy the Wikipedia entry, but I prefer to link to it here.

The irony is that airplanes that are not fly-by-wire are fly by wires... Steel cables that is.

Earlier planes (and many smaller GA planes to this day) typically use steel control cables that directly connect the control surfaces to the joke or stick. Such as can be seen running to the tail section of this plane 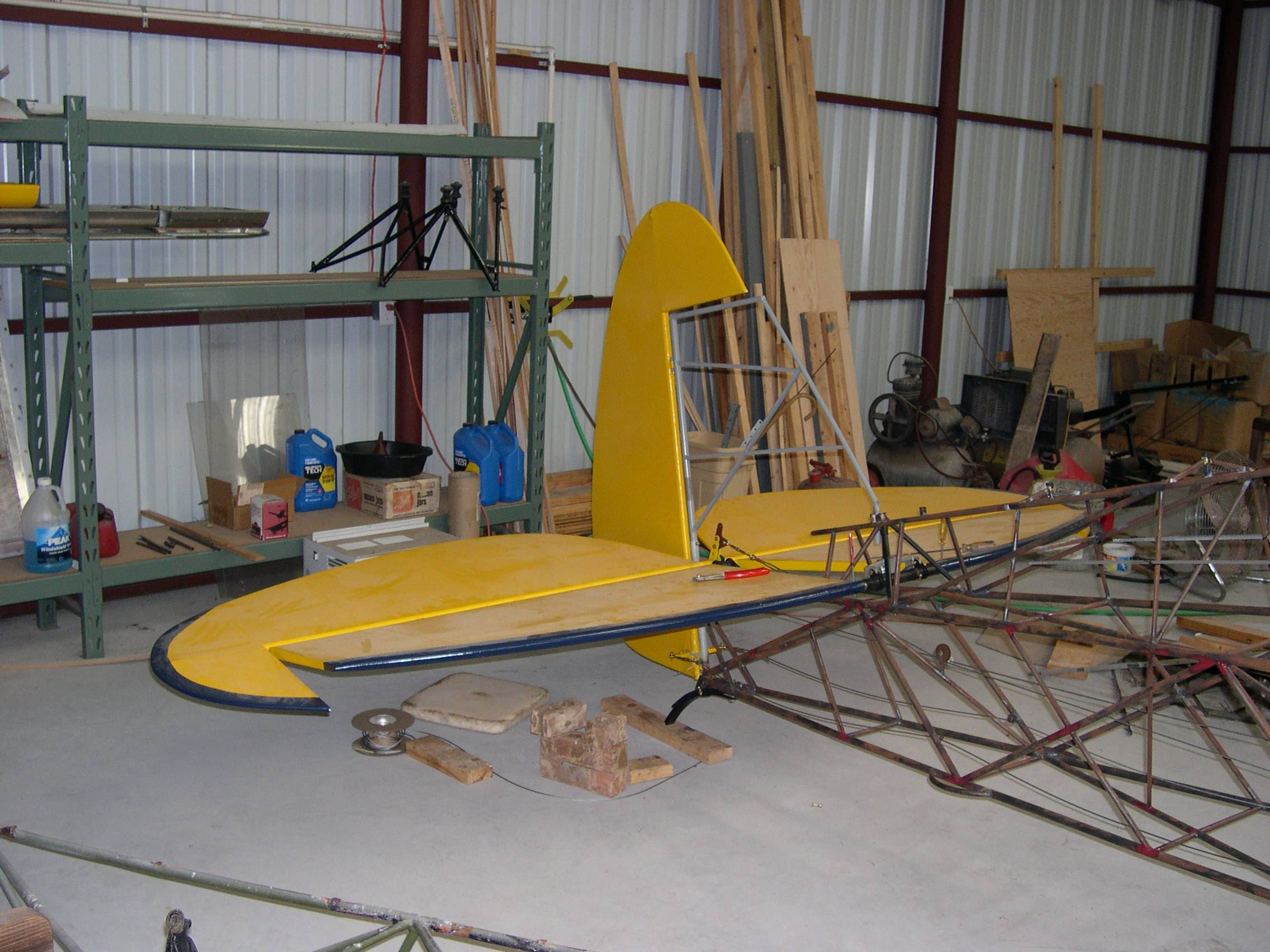 This is not limited to small planes by any means, many larger planes use control cables as well. You can also use control rods which is common place on Mooney aircraft however those generally come at the cost of weight but may provide a more tactile feel. 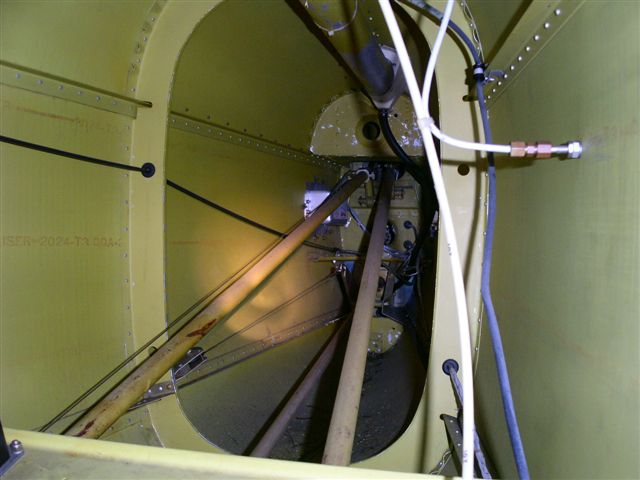 Fly-By-Wire generally means that the control inputs are translated via electronic cables to a set of hydraulic actuators to move the control surface. To expand on that, FBW systems also decide what movements the control surfaces will make and often do not allow the surfaces to move such that it will put the plane in a dangerous attitude. Simple electric signal control of actuators is not necessarily FBW and even planes as simple as the Cessna 172 have electronically controlled flaps that are not considered FBW.

Fly-by-wire (FBW) is a system that replaces the conventional manual flight controls of an aircraft with an electronic interface. The movements of flight controls are converted to electronic signals transmitted by wires (hence the fly-by-wire term), and flight control computers determine how to move the actuators at each control surface to provide the ordered response. The fly-by-wire system also allows automatic signals sent by the aircraft's computers to perform functions without the pilot's input, as in systems that automatically help stabilize the aircraft, or prevent unsafe operation of the aircraft outside of its performance envelope.

Light aircraft use a direct mechanical linkage using cables and/or push rods. Larger aircraft, and aircraft manufactured before the introduction of FBW use hydraulic actuators slaved directly to the controls in the cockpit.

The fundamental idea behind fly-by-wire is for the aircraft control response to be predictable, desirable, and safe.

Modern commercial aircraft designs increasingly abandoned conventional pushrods and cables in favor of fly-by-wire (FBW) architecture, simply out of competitive necessity driven by performance and safety features. Direct mechanical connections to the flight controls are simple and reliable for small/light aircraft, but will have problems in larger aircraft with higher performance capabilities. Mechanical flight control systems have increasingly undesirable characteristics at higher gross weights and speeds, lacking both maneuverability and cruise efficiency.

Larger aircraft have much greater inertial effects, therefore needing larger flight control surfaces, which also must be located farther from the cockpit controls. This stretched arrangement over long distances causes increased friction in the control cable paths and also high control forces at increased speed. Low speed flight of a large aircraft requires equally large control deflections driven by exaggerated pilot control movements. Precise control becomes degraded as every mechanical connection in the control path from the pilot’s hand to the elevator can wiggle, even just a little bit. The freeplay, or slightly loose connections along the length of the control path, add up to increase the control “deadband” for the pilot’s controls around the neutral, centered point. Both high- and low-speed effects make precise control more difficult to engineer for mechanical flight control systems, leading modern aircraft designers to implement fly-by-wire systems.

The simplest implementation of a fly-by-wire system needs the following components:

This simplification of a fly-by-wire system is functional, but for such a simplified system its utility is probably limited to a radio-controlled model aircraft. Each component operates without backup, meaning that any single failure results in a loss of all system capability. If a sensor in the pilot interface fails, the aircraft will crash. If the flight control computer loses power or freezes, the aircraft will crash. This simplification of a FBW system is straightforward, but fragile. There is no feedback to the pilot, so correct function of each component can only be assumed, and any failures will not be identified for correction. Without some redundancies and other sophistication, it will lack some capabilities needed for a safe and reliable full-sized aircraft.

Some of this is excerpted from my book, “Introduction to Fly-by-Wire Flight Control Systems: The professional pilot’s guide to understanding modern aircraft controls”.

Not the answer you're looking for? Browse other questions tagged flight-controls terminology fly-by-wire or ask your own question.

8
What is the working principle of trim tabs on the elevators?