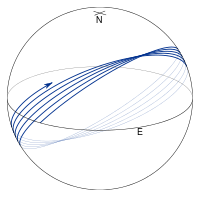 43
Do pilots adjust the aircraft's flight path to allow for the curvature of the Earth?
16
Which is more accurate for height measurement: GPS or barometer?
17
If an aircraft flies straight ahead, does it follow an orthodrome/great circle?
16
Can GPS be used in lieu of DME for instrument approaches?
6
Does ground speed represent the horizontal speed measured at sea level?
6
How do pilots get enough sleep in preparation for a long night flight?

15
How do pilots set the exact amount of thrust needed for a reduced power takeoff?
6
What's the difference between FMS and FMC?
7
How does the FOVE system work with the Airbus FMS?
5
Are sequenced waypoints still displayed on the Navigation Display / FMS legs page?
13
Why is air traffic control done manually by humans?
2
How does ADS-C and FMS relate to FANS?
0
Is there a manual which describes the algorithmic procedure on which the Vertical Navigation Guidance is based?
2
When does the FMS in the 737NG switch to approach mode?
1
How do I read this flight plan route?