What are the advantages and disadvantages of level flight with a nose-down attitude? [duplicate]

This is a questions about fixed-wing aircraft in general -- commercial planes and smaller. I have seen on a video that planes are capable of flying in a holding pattern with an nose-down attitude "for greater passenger comfort".

So, what are the advantages and disadvantages of level flight (not descent) with a nose down attitude?

And for what reasons do pilots fly like this?

Generally, a slight nose-up attitude gives the best performance. This allows the fuselage to create some lift without producing too much drag, thus filling the drop in the spanwise lift distribution created by the interruption of the wing by the fuselage. However, in passenger aircraft this will make the job of attendants much harder because their trolleys need to be pushed uphill and will roll away when not secured.

Therefore, a neutral attitude is preferred in cruise. When the aircraft slows down, it needs to increase its angle of attack, so the nose-up attitude results. When flaps are deflected, the zero-lift angle of attack is reduced, so a smaller angle of attack will again be possible. The precise attitude is a side effect of speed, air density and flap settings, and is not deliberately controlled when flying a holding pattern. By this time the flight attendants have returned to their jump seats, anyway.

Note that some aircraft will fly a nose-down attitude by design. The Boeing B-52 has powerful flaps which are designed to allow it to lift off without rotating, and when the aircraft accelerates during the initial climb after take-off or flies its approach, the fuselage will have a nose-down attitude. See the picture below of the B-2, the B-1B and the B-52 all flying at the same speed, each with its own fuselage attitude. 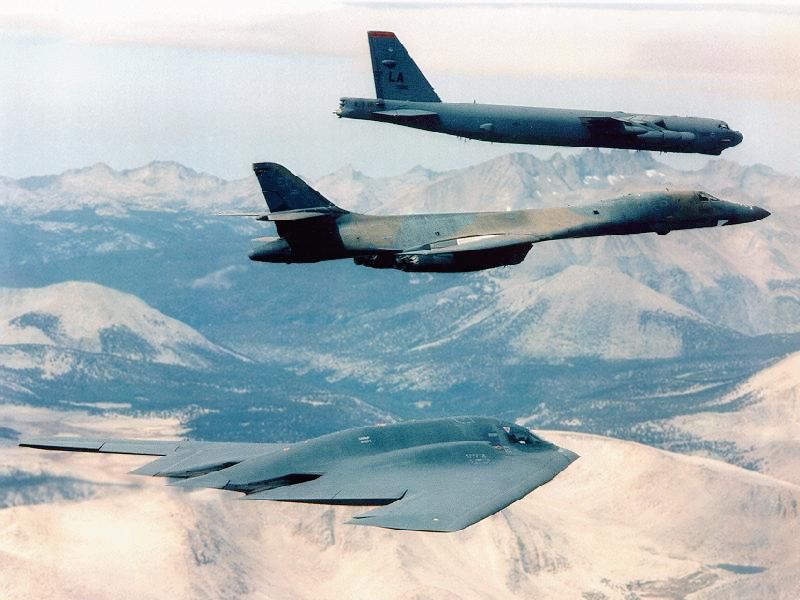 Not the answer you're looking for? Browse other questions tagged fixed-wing attitude pitch or ask your own question.

33
Why do airliners pitch up during cruise?
76
Why does the B-52 take off without rotating?
8
Is there anything wrong with this more symmetric aircraft design, and why isn't it used?
2
Is the angle of attack equal to zero when the plane is on the ground with wings level?
-2
Can one trim same AOA at a higher airspeed to climb?

5
Does the nose-up attitude of a jet make it more difficult to land than a turboprop?
5
What are the advantages or disadvantages of a mid wing design?
8
Is there anything wrong with this more symmetric aircraft design, and why isn't it used?
7
What's the meaning of "straight and level"?
5
What are the aerodynamic advantages and disadvantages of the Weltensegler wing?
12
Can a small GA plane maintain level flight with a significant nose-down attitude?
1
What are Altitude, Attitude and Heading Hold?
11
Why did Concorde have a max pitch down attitude in supersonic flight?