How should a glider pilot signal turns to the towplane?

When in aerotow in a glider, I thought the correct way to get the towplane to turn right (say) was to move gently to the left. That would gently nudge the towplane’s tail to the left, which would then point the nose to the right and be a good signal that the glider pilot wants to turn right.

The FAA glider flying handbook displays the opposite technique in a diagram: 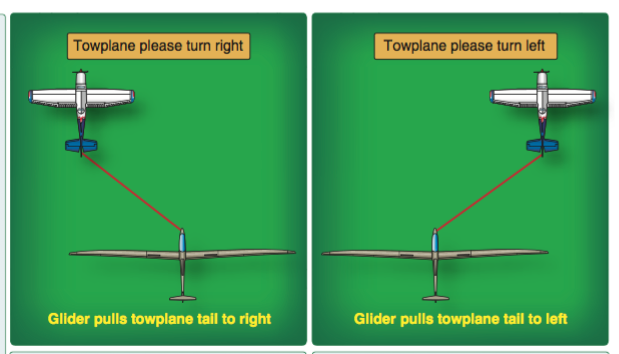 I don’t understand this. If you move right to ask the towplane to turn right, doesn’t that put the glider on the inside of the turn, and put you in the wrong place to follow the towplane around?

Which is the correct direction?

The glider flying handbook is wrong. The glider signals to the tow pilot by moving to the outside of the turn.

We glider pilots have been trying toget the FAA to fix this and many other errors in the GFH for years. See the newsgroup rec.aviation.soaring

Also, many tow pilots ignore tow steering directions because they think they know better than the glider pilot where the lift is.

The turning radius R is given by,

If the glider is turning at a radius greater than the tow plane, i.e. it is in the outside of the turn, it must be flying at a higher speed in order to complete each circle in the same time. For glider in the inside turn, the opposite is true i.e. the glider is flying at lower speed compared the tow plane. 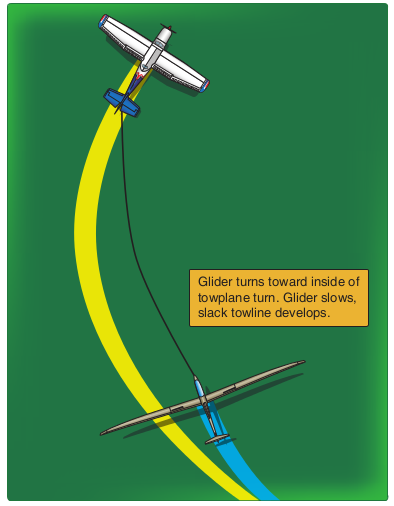 Also for outside turn, the bank angle of the glider should be higher than the tow aircraft to compensate for the higher speed. The reverse is true for an inside turn. 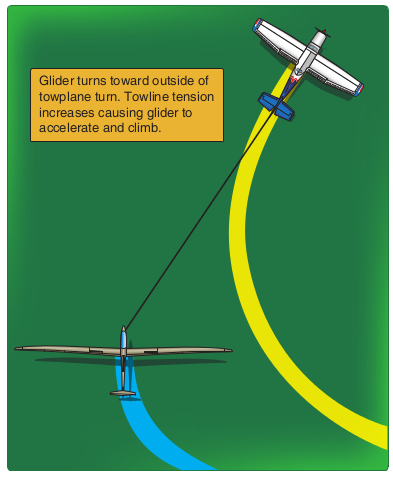 Therefore, the only way the two aircraft can fly coordinated with the same bank angle is if they have the same speed and turning radius.

Flying the glider in inside of a turn is preferred because it is easy to give corrections (to have same speed and turning radius) compared to outside turn. The glider bank angle can be reduced till it returns to the correct position. Since the glider is flying at a lower airspeed (than the tow plane) it will accelerate as its turn radius increases so there will be no tendency for slack to develop in the tow line.

For gliders in outside turn, the bank angle has to be increased to reduce the turn radius. However, as the glider is flying faster compared to the tow plane, it (glider) will tend to overtake it as turn radius is reduced, developing slack in the line unless airspeed is also reduced (usually by yawing the glider away from the towplane). In this case, the correction process is more difficult.

For this reason, it is advisable to

In general, it is better to be in the inside of turn rather than outside:

If you have to err on one side or the other, it is better to err on the inside – especially when at a low altitude. This way, you’re not in as much danger of locking out.

as long as you are not too far inside so as to sink and stall.

Not the answer you're looking for? Browse other questions tagged glider or ask your own question.

1
Which should I get a FAA glider licence or a Canadian glider licence?
19
How can the Perlan II glider climb to 90,000 feet?
7
How should I deal with a cable break at low level during a glider winch launch?
7
Can I take friends flying with a private pilot glider license?
3
Do I need to obtain a student pilot certificate to transition from Glider to Sport Pilot?
2
Which pilot license is required in the US to engage in glider towing?
6
How should a glider pilot handle inadvertently entering a foreign country?
6
How big is the radar cross section of a modern glider?
10
Why do the ailerons of this flying wing work oppositely compared to those of an airplane?