The image comes from a 1956 Nestle, a chocolate maker, sticker album. 'Maravillas del Universo', serie 1. Chapter has 3 pages, and is entitled: 'The sound barrier', signed by the woman test pilot: Jacqueline Cochran. It indicates it's a Lippisch L-13, but it's not, Lippisch L-13 was a rearwards swept Delta design, with a thick Vertical Fin that included the pilot's cabin, it was tested as a glider. Final version had to use a Ramjet, fueled by burning coal in a rotating basket. YouTube video link. 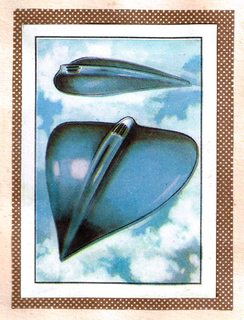 Alexander Lippisch did develop a similar-looking wind tunnel model, see photo. According to his Errinerungen (memoirs), Page 218, this was in 1943 and it was tested in 1944. Dan Sharp; Secret Projects of the Luftwaffe: Vol. 1 Jet Fighters 1939-1945 (Mortons 2020) shows a couple of photos on Page 219 and says that it marked the start of his delta-winged P.12/P.13 project, including the DM-1 glider which was actually built and flown. But this early wind tunnel model had only a thin central spine, with no cockpit and, like all his delta aeroplanes, was designed to fly apex foremost. 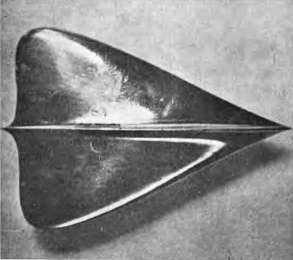 The illustration on the sticker or card is, as you note, back to front. Consequently its supersonic performance would be appalling. It is probably based on a photo of the model, with its identification based on remarks about the P.13 (or Projekt 13), but is otherwise total fantasy. Presumably there is no suggestion that the author of the article actually flew it.

According to the air force via wayback machine Jacqueline "Jackie" Cochran born Bessie Lee Pittman was the first woman to break the sound barrier in an F-86 Sabre Jet in 1953. Cochran retired from the Reserve in 1970 as a colonel. She received numerous awards, including a Legion of Merit.

The Lippisch aircraft was designed in late 1944 and never built.

This is a case of mixed up facts.