I'm doing a problem on Flight Mechanics in which a banked turn is performed. The center of gravity of the aircraft is always within an horizontal plane.

In order to write the dynamic equations, I have to assume some simplifications and conditions. One of them is the following:

Side slip angle ($\beta$) is defined as the angle made by the velocity vector to longitudinal axis of the vehicle at the center of gravity in an instantaneous frame.

Thrust side slip angle ($\nu$) is defined as the angle made by the thrust vector to longitudinal axis of the vehicle at the center of gravity in an instantaneous frame. https://en.wikipedia.org/wiki/Slip_(aerodynamics)#Sideslip_angle 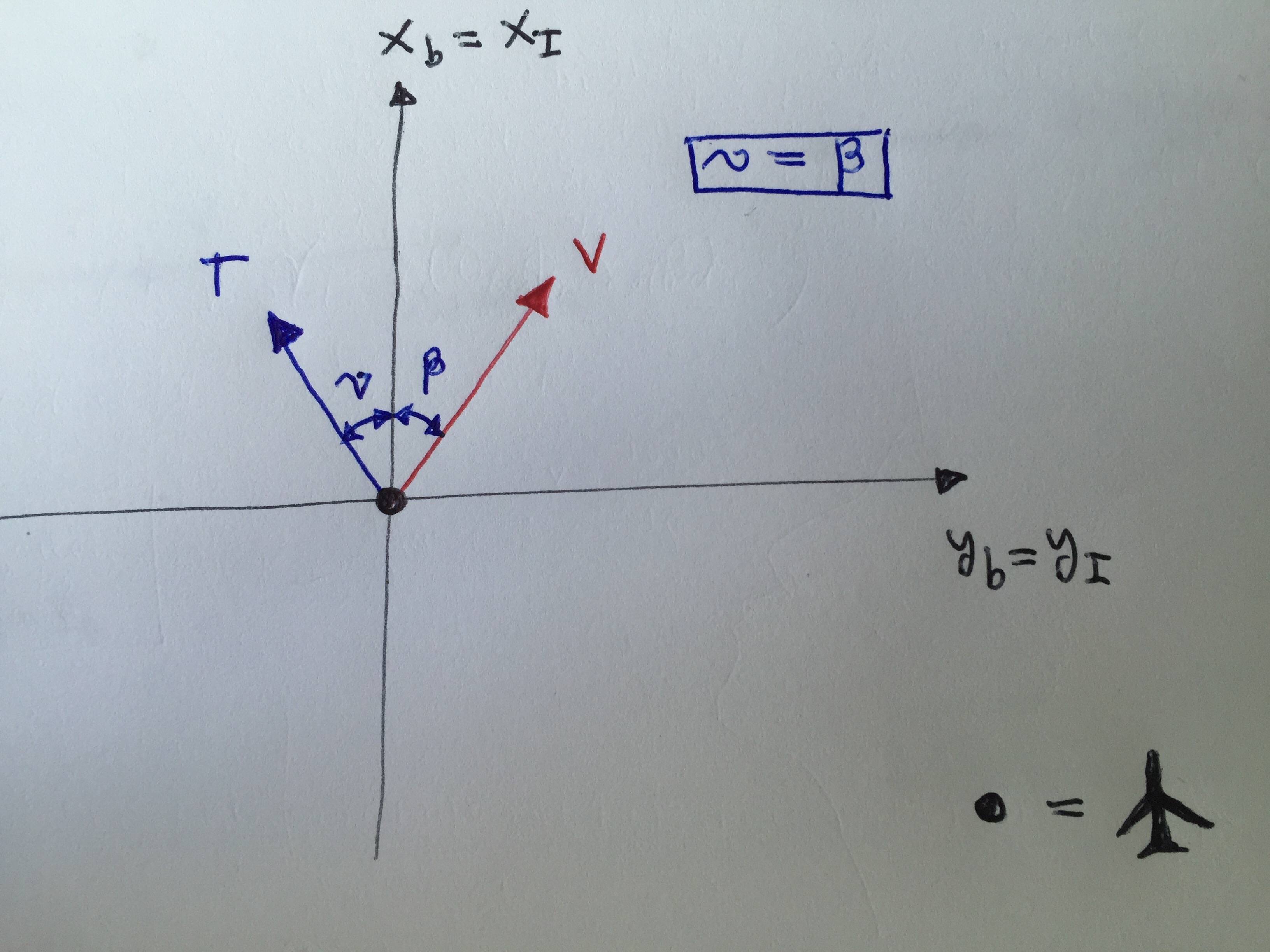 Relying on physics, causing a mass to execute a circular path requires a suitable centripetal force. In an airplane in a banked balanced turn, this comes from the inward component of lift due to the bank angle.

However, if the turn is not properly co-ordinated, there can be additional contributions to the centripetal force from the power plant thrust no longer being directed tangentially and sidethrust on the airframe due to slip.

The extreme case is the flat turn where the wings remain level and the power plant thrust has an inward component due to the sideslip.

That said, apart from an airplane having vectoring thrust, the only reason for a thrust sideslip angle I can think of is that many single airscrew airplanes have built-in sidethrust to counteract engine torque. However there is no requirement for the engine sidethrust angle to equal the slip angle, so in that case the assumption that the two angles are the same cannot be valid.

The thrust line of an airscrew doesn't change with slip. The slip causes asymmetric thrust on the blades which precesses gyroscopically so the airscrew creates a couple which tends to increase the slip angle.

Not the answer you're looking for? Browse other questions tagged aircraft-physics sideslip or ask your own question.

21
How does the F-35B not flip over during transition?
1
How much force is produced by control surfaces?
7
Why does a turn and slip indicator matter?
0
A question about the exact meaning of one British usage of the term "Angle of Incidence"
1
Does this web page really correctly depict the angle that is called "incidence" in the French language in the aviation context?
4
How are coefficients of equation of sideslip angle in the paper "A general Solution to the Aircraft Trim Problem" calculated?
2
Why does a steady-state non-zero body yaw and/ or roll rate induce side force?