How does stall risk in paramotors differ from that of conventional fixed-wing aircraft?

I happened to be walking past a small outdoor fair today, and saw someone flying a paramotor. The craft took off and started a steep ascending turn losing speed rapidly, seemed almost to come to a stop (relative the ground, but the flags nearby didn't show much wind, either) before the pilot brought it back to more level flight and got some way again.

I'm not a pilot, but I'm roughly aware of the mechanism of stalls and the consequent danger of high angle of attack, low speed maneuvers and I was briefly worried that there was going to be a problem.

In hindsight, the craft clearly has a very low stall speed (not much more than walking speed, I guess) but it did leave me wondering.

Are these craft are more or less at risk of stalling than conventional fixed wing aircraft?

I suppose with paramotor you mean a powered paraglider, as pictured below. 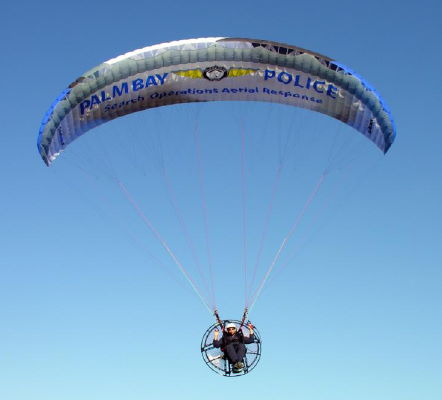 Since they obey the same laws of physics, they also stall, just like a fixed-wing aircraft does. There are, however, some peculiarities which should be mentioned:

Generally, due to their low wing loading and the drag of the raiser lines, paramotors fly at much lower speeds than aircraft, so accidents involve less energy, but the pilot has no protection around her/him, so fatal accidents do occur more regularly than with fixed-wing aircraft. For paragliders, Wikipedia gives a number of 2 fatalities per year for 10.000 pilots.