Why don't passenger aircraft use the trijet configuration anymore?

As a kid I distinctly remember seeing aircraft like the bright blue KLM MD-11 having the prominent third engine on the tail. 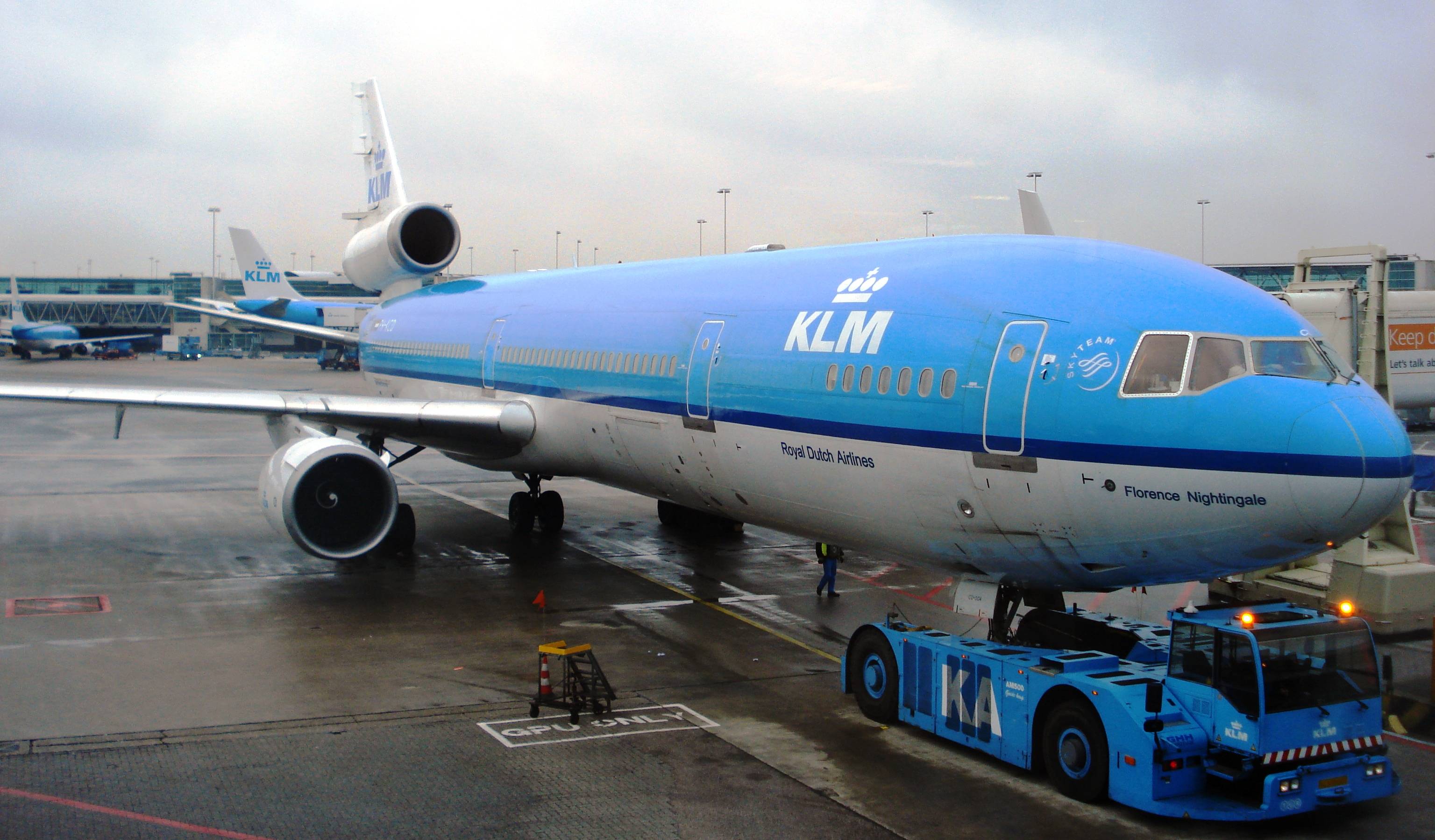 However, I don't think I've seen a plane in the past few years (besides maybe a few smaller private jets) that has a engine on the tail - let alone a trijet configuration.

What's with their disappearance?

The fewer engines an aircraft has, the lower are its operating cost. Engines are the most maintenance-intensive part of an aircraft, and doing a hot section inspection on two large engines costs less than doing it on three somewhat smaller engines.

When the tri-jets were developed, no sufficiently large and powerful engines were available. They were already cheaper to operate than the four-engined aircraft, and too large to have sufficient power with just two. Now, with engines which can deliver a static thrust of more than 100,000 pounds, everything below a Jumbo Jet or an A380 can be powered with just two engines.

Another reason is increased engine reliability: With three or four engines, an engine failure is less of a problem than with just two engines per airplane. Previously, route planning had to keep a maximum distance of 60 flight minutes to a diversion airport. In 1964, this was waived for three-engined aircraft, but twins were still bound to this restriction. With more experience and better engines, this rule has been relaxed for twins gradually to 120 (1985), then 180 (1988), and now 370 (2014) minutes for the Airbus A350 XWB, and twins have become much more versatile for their airlines.

Some of the old tri-jet designs were quite popular with operators: The last Tupolev Tu-154 was built only in 2013. But besides the Dassault Falcon 900 and 7X business jets, I don't know of any trijet which is still in production.

The main reason for selecting three engines was reliability issues with gas turbine engines used in the dawn of the jet age. The FAA Operating Requirements §121.161 Airplane limitations: Type of route says,

... no certificate holder may operate a turbine-engine-powered airplane over a route that contains a point—

Most of the initial tri-jets were configured for long range operations as twin engined aircraft could not be operated in most transatlantic routes.

However, as the engine reliability has improved, the regulatory authorities have certified a number of twin engined aircraft for ETOPS (Extended Range Twin Engined Operations). As airlines prefer as few engines as possible (which translates into lower upfront and operating costs), tri-jets have become a relic of the past.

For the same reasons, we are not seeing any four engined aircraft and every aircraft under development is twin-engined. Also, improvements in engine power (777's GE-90 produces nearly twice the thrust of MD-11's GE CF-6) and fuel economy (today's aircraft burn around 10% less fuel compared to the aircraft from 1980s) mean that the necessary thrust (and range) can be generated by lesser number of engines.

Another (minor) point is that the bypass ratios have increased in the recent decades and this might present difficulties in placement of the center engine.

Other (great) answers have already covered most reasons.

On Business Jets side, you can do this : http://www.airteamimages.com/dassault-falcon-7x_CS-DTS_masterjet_176224.html

But not that often with airliners. :P

A third (or second) engine on/below the tail adds specific parts/components, that have to be manufactured, maintained, and spare parts have to be made available for the entire lifetime of the type. Just like the reason why "eyebrows" were removed from the 737 line, and not a single airliner has purchased the 777 with folding wings (and the idea dropped on A380-like projects), reducing costs is a relevant reason to not manufacture "special" parts whenever possible. Best sellers are aircraft that are cheap to handle and maintain. If you can use larger engines to get two instead of three, then...

Similar reasons for unmounting the #2 engine. On a relatively small jet, you can unmount the engine just like it was on the Boeing 727. However, to make that possible with engines the class (and size) of a GE90, you need strengthened structures (increased weight: bad!) around the tail cone, special lifters, a tail cone large enough to contain that engine, compliant with regulation in case of a fan blade failure. Hydraulics and other electrical wiring must be secured. That adds many more special components that have to be checked for airworthiness on a regular basis. When your aircraft is stuck at an airport without the appropriate equipment, you must ferry them there, with the replacement engine. Cost!

It's highly unlikely we'll see a tail mounted engine on airliners the size of a 777 in the future.

Small engines are OK. Large engines not that much. Even with the incredible progress we have made in reducing engine noise, vibrations are still a major factor, and engine pylons are the best way we have to reduce them. A tail mounted engine doesn't really have a pylon.

Brutally pitching up the aircraft can reduce or disturb the #2 engine intake airflow, with sometimes noticeable issues. This is a major concern for pilots operating on hot and high conditions. This also happens during stall and deep stall. Tail mounted engines requires larger or extra tail surfaces to stabilize the aircraft and reduce drag (weight + more parts to maintain)

When the engines are not mounted in line with the other two (DC10/MD11, Tristar), the center engine produces some specific pitching behaviours depending on loading, thrust and flight phases. It's worse in the case of one inoperative engine. While this behaviour has saved the life of many in the past, it was also a factor in some crashes or close calls.

Related: aircraft behaviour varies greatly between a short version of the frame to a longer one. Stretching a three engined aircraft requires much more research, development and testing than a twin engine one. Having optimized types meeting airlines requirements in your catalog is not that easy with three engined aircraft.

In the case of a component failing at a high rotation speed, a fuel leak, or a fire, mounting the engine in the fuselage is obviously not the most seducing option. The not so distant Qantas A380, Air Transat A330, Concorde in Gonnesse... Fighting a fire on the engine #2 of a Tristar is not the same as fighting the fire on the BA 777 at Las Vegas.

You can't conduct a fan blade overview upon walk around on engine #2.

You can create new nacelles for more powerful, quieter and more fuel saving engines for a 737 (100/200 > Classics > NG > Max > ...) or an A32x (Neo), avoiding the need to develop an entirely new air frame. Reengining the 727 had mitigated results. All KC135 have been reengined and the 747 with the 8I/F. A330 and 777s... Going from the DC10 to the final version of the MD11 (which is basically a reengined and stretched DC10) wasn't that easy. Many retrofits were made available several years after the MD11 entered commercial service. As we don't clearly know what the future is made of, a three engined aircraft may fail to comply with future technologies, which disallows lengthening the lifetime of the type, unless designed from the start to be upgraded, like the Falcon 7X (larger/heavier versions in the plans).

However, having three engines is not a bad thing. It all depends on the purpose of the aircraft. One extra engine can reduce take off roll, allow the selection of smaller and quieter engines (in some rare cases), increase ETOPS certification, give access to hot and high airports, etc. If those reasons are relevant enough to cancel the extra cost required by the extra engine, then you can manufacture a three engined aircraft (or a six engined, like the An225).

First of all, the L-1011 had a fourth hydraulic system compared to the DC-10/MD-11 which only had three.

Secondly, the L-1011 was a fantastic aircraft which had design input from Kelly Johnson, the man who brought us the SR 71 Blackbird and the F-104 Star Fighter.

The L-1011 was by far the superior aircraft and had capabilities that have since only been met for an aircraft of its size by the 777. It could even land itself.

What hurt the L-1011 was the financial failure of Rolls Royce that delayed the aircraft's entry into the market by a year. It never recovered from the orders lost to the DC-10 by AA and United who were desperate to get a tri-jet into their fleets.

The engines couldn't be changed because the Rolls Royce RB-211 was specifically designed for the L-1011's center engine housing and nothing else would fit, and there wasn't time for a redesign, retest, and re-certification. Fortunately the British government bailed out Rolls Royce so that the engines were eventually built and delivered.

The final straw for the DC-10 was the crash in Chicago, though technically an AA maintenance failure, the DC-10 was poorly designed and rushed into the marketplace to take advantage of the L-1011's delay. Not another DC-10 was ordered after that incident, and the MD-11 was simply a repackaged version of the same problem aircraft, made of composite materials and more fuel efficient or so everyone thought until it went into service. Another white elephant.

Standard on the Tri-Star was a co-pilot stick shaker, an extra cost option on the DC-10, as well as automatic electrical bus relays which transferred load from a dead engine to a live one, standard on the L-1011 and an option on DC-10, and finally the front slats on the L-10 mechanically locked into place once hydraulically extended, something not offered on the DC-10, which is why AA 191 crashed. Had this been an L-1011, that accident would not have occurred.

The final death knell for the Tri-Star was that Lockheed simply wanted out of the commercial aircraft marketplace so that it could focus on military contracts.

Boeing had no reason to offer a Tri-jet as it developed the long and short versions of the 747. In fact, the Tri-jets were a design competition between Douglas and Lockheed based on American Airlines criteria which initially ordered the L-10, but switched to the DC-10 after Rolls Royce went into bankruptcy.

As for the 727, never intended to be more than it was, an aircraft capable of short ETOPS, mostly to the Caribbean or Hawaii.

Ask any pilot who had flown both the Tri-Star and the DC-10 as to which he preferred and you'll find that almost all will pick the Lockheed.

The major reason for going away from trijet was a series of total hydraulic failures following an uncontained engine failure. This happened in both the L1011 and the MD-10 (but not the 727)

When an engine failed, high speed debris from the failed engine would cut the hydraulic system and control cables. The result was an airplane without conventional controls. For the most part the result was a total loss. In the case of the Souix City event, https://en.wikipedia.org/wiki/United_Airlines_Flight_232

four pilots were able to land the plane (almost) and the resulting crash only killed about 1/3 of the passengers.

Not a good idea, three engines.

Not the answer you're looking for? Browse other questions tagged aviation-history engine-placement or ask your own question.

27
Why does the 747 have 4 engines instead of 2?
10
Why does the BAe 146 have higher maintenance costs than other comparable jet aircraft?
2
What are the advantages/disadvantages of placing an engine in the tail?

20
Why does the US use two types of aerial refueling?
8
Why did the early versions of the Me-109 use a braced stabilizer?
14
Why did some aircraft use hand-crank instead of gravity for alternate gear extension?
9
Who invented the cabin chime? What aircraft was the first to use it?
2
What was the earliest plane in push-pull configuration that flew or at least took off?
51
Why don't aircraft use nuclear propulsion?
13
Why didn't early jetliners use turbofans?
6
Which aircraft had the shortest operational life?
7
How did aircraft flying in formation use flares to communicate with each other?