How are evacuation tests made as realistic as possible?

I've seen the video of the A380 evacuation test and similar ones.

While the fast evacuation is impressive, a criticism often heard (and read in the comments on YouTube) is that these people were prepared and (roughly) knew what was about to happen. Also, people in the back of the queue were not in fear of their lives, so they just waited on their turn.
No one tried to go against the stream to look for loved ones seated in different rows, no one tried to get at their personal belongings to try and take those with them.

The only ‘realistic’ way of carrying out a full scale evacuation of an aircraft would be to put people in it and set it on fire. That said, FAA takes some efforts to keep the evacuation tests as realistic as possible without seriously endangering the safety of the 'passengers'. The FAA Advisory Circular 25.803-1A - Emergency Evacuation Demonstrations lays out some rules regarding this.

There is intense debate over how 'realistic' the evacuation tests are. For example, the evacuation of British Airtours Flight 28M, a Boeing 737 took more than 5 minutes (resulting in the deaths of more than 50 people), though the aircraft had passed the test.

According to Aircraft Evacuation Testing: Research and Technology Issues, there are multiple problems with this type of testing: 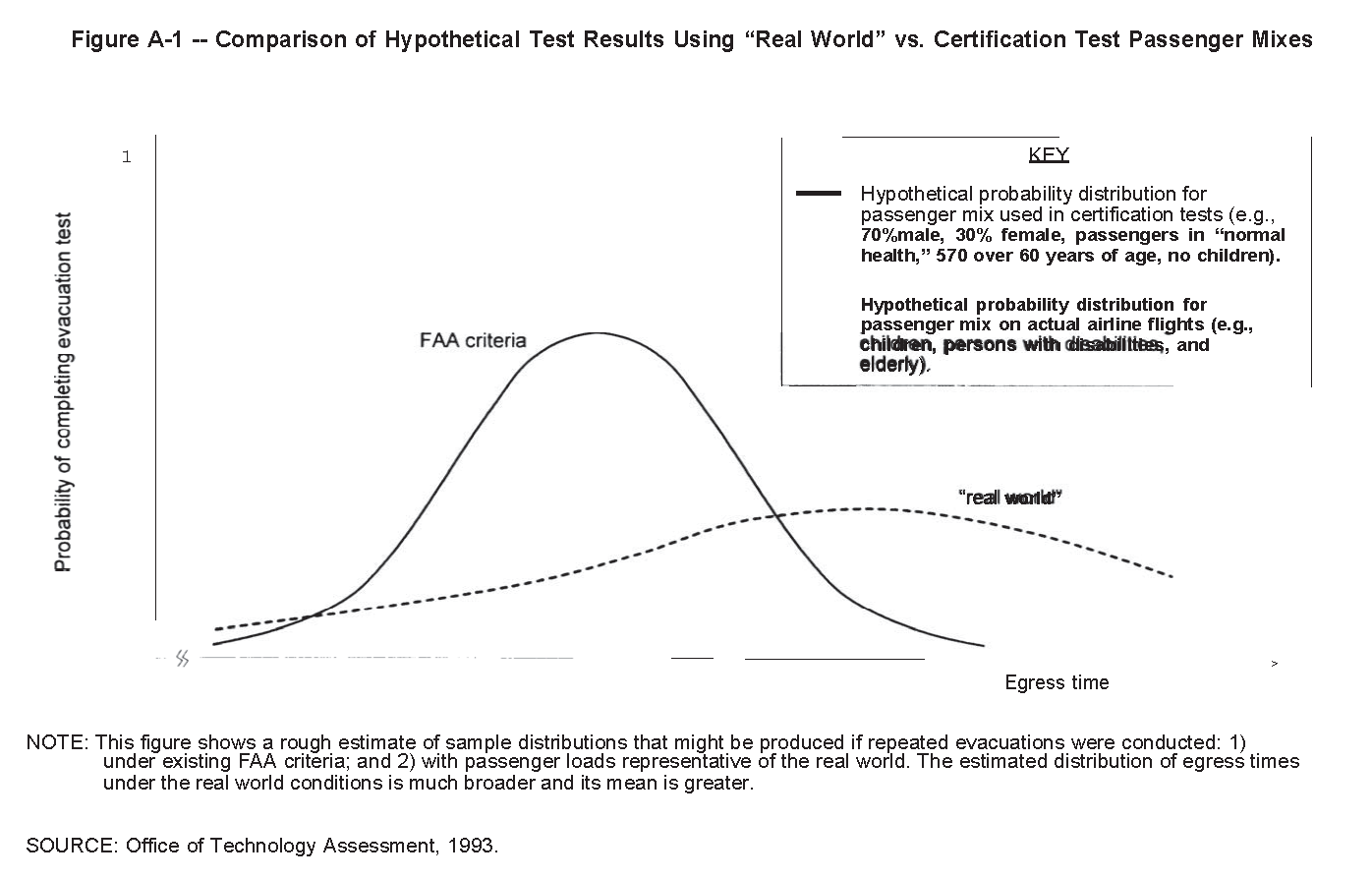 As a result of the aforementioned BA28M accident, UK's, Cranfield Institute of Technology (CIT) carried out a number of tests which included a case where financial incentives were offered to foster competitive behavior among test participants. The study determined that,

the presence of a competitive element had a significant impact on egress rates for evacuations through the bulkheads, but did not affect the rate of evacuation through the Type III exit

Note: According to FAA, This type is a rectangular opening of not less than 20 inches wide by 36 inches high, with corner radii not greater than one-third the width of the exit, and with a step-up inside the airplane of not more than 20 inches. If the exit is located over the wing, the step-down outside the airplane may not exceed 27 inches.

The US Department of Transportation also carried out studies, which resulted in similar conclusions. 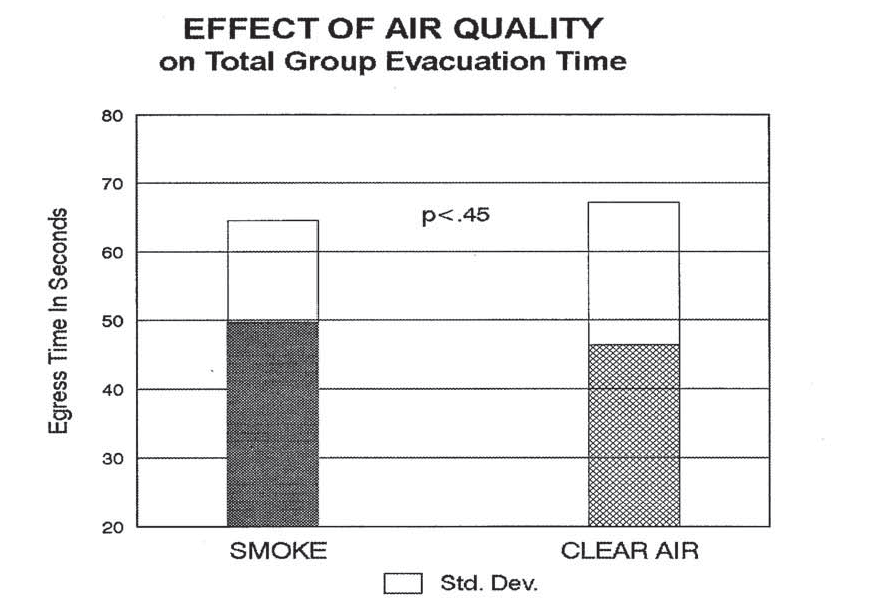 The study found that the introduction of smoke did not have much effect, but noted,

Although this research design biased against revealing any deleterious effects of smoke on egress, previous studies using smoke had shown robust reductions in egress speed. 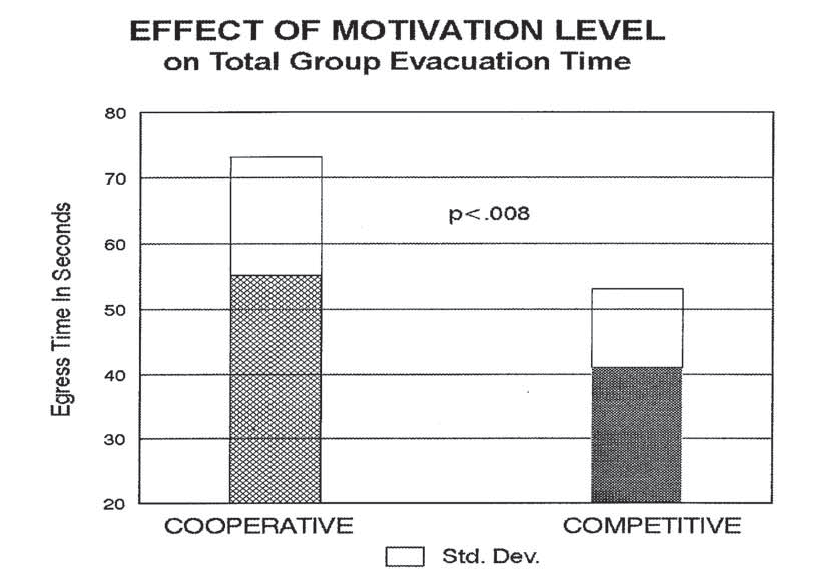 In this study, the 'competitive' group were offered a financial bonus of $50 to be among the first 25% passengers to evacuate the arcraft. However, the passengers in the competitve trials

...(became) more aggressive and climbing over seats, outmaneuvering other passengers, etc. to get out quickly.

resulting in broken over seat backs, among others. I suspect participant safety is the main reason FAA doesn't offer any incentives duing demonstration.

Because of these reasons, simulations are being increasingly used in modelling evacuations which include variables like crowd behavior, state (of the person), mobility, etc.

IIRC, the passengers that were interviewed in the video you linked to explicitly said that they did not know exactly what was about to happen. They only knew they were going to have to evacuate in the dark with debris on the floor with half of the exits inoperable. They did not know when the evacuation was going to happen; they sat around in a dark plane for an indeterminate amount of time. If your airplane is crashing, you pretty much also know all of that in advance.

Likewise, in a real evacuation, there is an even bigger incentive than a stack of dollar bills to get out fast: your life.

Note that the A380 evacuation certification test actually did lead to one injured test passenger. The most unrealistic part is the vast number of people helping with the evacuation on the ground outside of the airplane. However, those do not affect the speed of the evacuation, only prevent serious injuries (e.g. by getting people off the slides more quickly than in a real evacuation, preventing a possible "pile-up" with passengers slamming into one another at high speed).

Some of them look pretty well disoriented to me in the IR videos.

In addition to the other excellent answers, the simulator is equipped with speakers, extra lights, and a fog machine - or at least one airline has such a simulator and I expect others do also. I have done one simply for fun, we were not being timed, and the sound effects, including screaming and weird roaring whooshing noises, plus the orange fire-like light from an unexpected direction and the presence of "smoke" that luckily doesn't smell of smoke all got the adrenaline going and made things more challenging (and therefore realistic) than they otherwise would have been. And we knew exactly what we were doing, we had been offered the treat of experiencing a simulated evacuation.

As for the thing about going backwards - an airline could always instruct someone to misbehave like that, but one of the reasons the target time is set to 90 seconds with only half the exits in use is so that even if such misbehaviours double the exit time, you still get everyone out in 3 minutes. And in real life you have staff who could tell people not to do that.

(Or other passengers: 30 years ago news reports about an evacuation from a soon-to-be-burning plane included tales of the man with the big deep voice who called people over to the exits and urged them to leave during the 90 seconds they got before the smoke turned to flames and those still on board all died, including the folksinger famous for his big deep voice. Two bodies were found far from the exits even though all passengers had moved close to the exits during the descent; it was concluded they had gone past the exits in panic. This is why some airlines instruct you to count rows to the exit from your seat. This flight is also why there are smoke detectors in the lavs.)

May be paid too, in mock drill aircraft manufacturer/airliner wants to show this as added advantage for how fast evacuation can be done in that particular model of aircraft. If they have not paid for this activity, then passengers might not be as quick as you can observe them in video.

Even in software companies, when they do Fire mock drill, you can see employees coming out of the company slowly and record the time with very slowest evacuation.

With all these reasons you will not be able to evacuate passengers as fast as you do it in mock drills.

I don't know how (on what basis) this particular equipment is certified.

Not the answer you're looking for? Browse other questions tagged evacuation or ask your own question.

23
Are engines automatically stopped in an emergency landing?
15
Where does the 90 seconds limit for plane evacuation come from?
9
Can regular emergency exits not work after crashlanding?
12
Do cabin evacuation tests include passengers with limited mobility?
3
How big a risk is to abort take-off before V1 with uncontained engine fire and side-wind?

11
How often does evacuation happen as shown during the pre-flight safety videos/stewardess instructions?
11
What are these little things on the evacuation slide?
11
How is the emergency exit row handled when there are no passengers aboard eligible to sit in an exit row seat?
6
How, typically, do passengers and crew behave in a real-life airliner evacuation?
12
Do cabin evacuation tests include passengers with limited mobility?
9
How are disabled passengers evacuated during emergency?