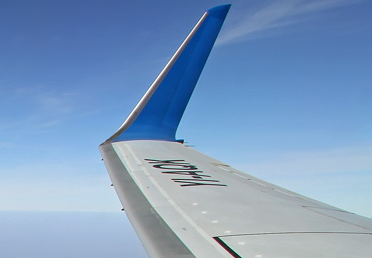 Winglets, raked wingtips, fences, sharklets all do the same thing; reduce drag. When the wing is working hard (high AoA), it will produce a lot of this kind of drag since vortices of all kinds will be stronger. Winglets makes the passage of air from the bottom of the wing to the lower pressure top of the wing more difficult, thus reducing induced drag.

The big manufacturers explored offering winglet retrofit kits to their customers but at the time, it wasn't economical since fuel was so cheap. These days, however, the retrofits pay for themselves fairly quickly even on airplanes wings that have a fairly high aspect ratio. Every 737/757/767 guy that I talk to says they get in the neighborhood of a 4-6% boost in fuel savings.

Not the answer you're looking for? Browse other questions tagged aircraft-design aircraft-performance winglets or ask your own question.

2
Why do newer commercial aircraft have their wingtips curved up?
-5
What exactly do winglets do?
1
Small aircraft performance enhancements due to winglets?
0
How does the airflow around winglets reduce drag?
0
What role do the winglets on the next-generation 737 play?
1
why are tips of airplane wings "bent' up?
12
How does the raked wingtip of the Boeing 787 work?
7
How is drag created from wingtip vortices?
5
What are endplates? How do they work?
-4
Is a swept wing the better option against the winglet
See more linked questions