What are some examples of warning areas and restricted areas?

Can you please give me some examples of warning and restricted areas?

How can an aircraft enter these areas? What are the procedures you have to follow before entering them?

I'll provide information for the US airspace. However many countries, ICAO members, will have similar concepts and procedures.

You are not required to follow any procedure for entering a warning area or an inactive restricted airspace. In the latter case, you need to ensure the area is actually inactive. A safe practice is to contact the controlling agency of the area prior to enter any warning or restricted one.

The longer answer below develops a bit around special use airspaces which encompass warning and restricted airspaces among other. You'll also find two examples of these areas.

The airspace over the US is open to navigation, a part of this airspace benefit from services provided by air traffic control (ATC), e.g. safe separation and traffic information.

This controlled airspace includes airport areas and airways, and other areas of interest. It is is ruled by air regulations relative to airspace classes. In the US these regulations are found in document 94 CFR 91.

Some limited areas, that may be permanent or temporary, can be prohibited or restricted. Together they constitute the special use airspaces (SUA)

The SUA are repertoried by the FAA: SUA Web site.

You may search by name or scan the map. R denotes a restricted airspace, and W a warning area. 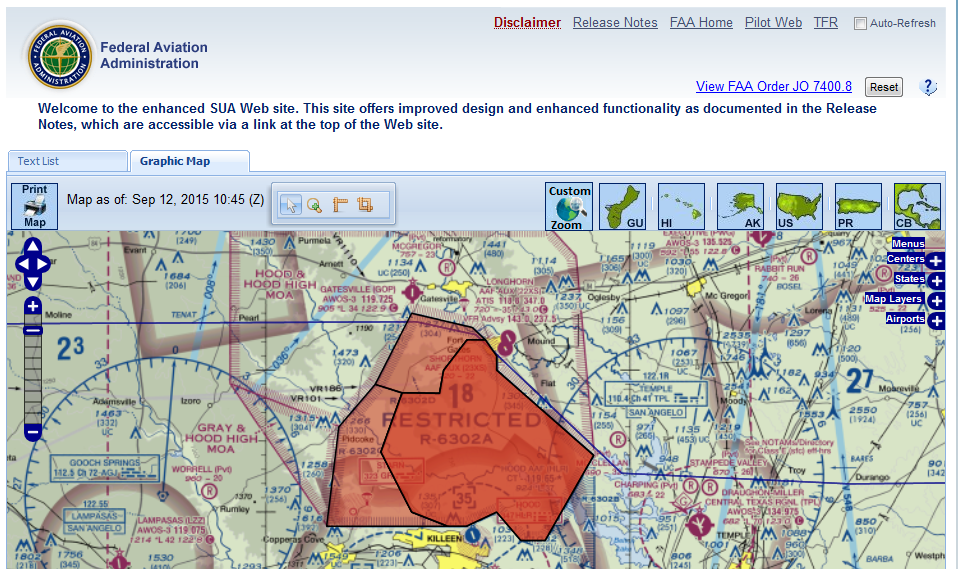 Your question is limited to warning areas and restricted airspace.

Restricted areas denote the existence of unusual, often invisible, hazards to aircraft such as artillery firing, aerial gunnery, or guided missiles. Penetration of restricted areas without authorization from the using or controlling agency may be extremely hazardous to the aircraft and its occupants.

Entry: Forbidden when active, subject to ATC clearance on a case by case basis.

For areas that have a scheduled activity, times of activation are published in the AIP. When inactive, a R-area is just a like any other location of the surrounding airspace class. When active it is just forbidden to enter it (albeit FAA may deliver specific clearances if solicited).

Restricted airspace zones may not be active at all times; in such cases there are typically schedules of local dates and times available to aviators specifying when the zone is active, and at other times, the airspace is subject to normal VFR/IFR operation for the applicable airspace class.

Activity time may happen unscheduled for some R-areas. A schedule cannot be published, in this case a NOTAM is used to inform airspace users.

A few zones are activated by NOTAM; an example is R-2503D over Camp Pendleton in southern California, between San Diego and Los Angeles. This particular zone, beginning at 2000ft above sea level over most of southern Camp Pendleton, can only be active for a certain number of days per year, thus allowing small planes to fly a direct route over land between the two metro areas instead of being diverted offshore or into mountainous terrain further inland. 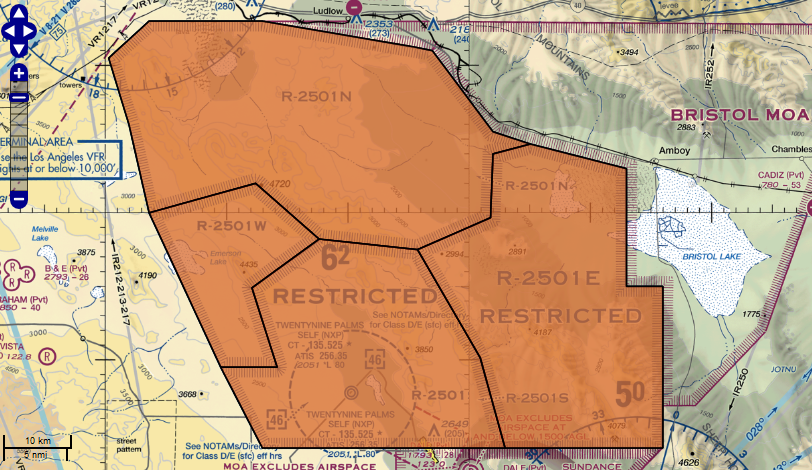 The following are training, and Military Operating Areas (MOAs) associated with the Twentynine Palms complex:

This area around a large military complex is active (restricted) 24x7, at any altitude. A pilot who wants to enter this area for some reason needs to contact either the controlling agency (Los Angeles ARTCC) or the using agency (Marine Corps Base).

A warning area is airspace of defined dimensions, extending from three nautical miles outward from the coast of the U.S., that contains activity that may be hazardous to nonparticipating aircraft. The purpose of such warning areas is to warn nonparticipating pilots of the potential danger. A warning area may be located over domestic or international waters or both.

Entry without specific clearance, but can be hazardous. Contacting ATC prior to entering a warning area is not mandatory per regulations, but is a good practice regarding safety.

The area surrounding Kauai is divided into warning areas with W-186 and W-188 controlled by PMRF. The Fleet Area Control and Surveillance Facility (FACSFAC) controls W-187, 189, and 190. Space, air, and surface tracking are accomplished from PMRF precision-tracking radar sites at elevations of 75 ft., 1700 ft., and 3800 ft. These are supported by radar systems operated by agencies external to PMRF.

The distinction is that restricted areas are all over land, most have a ceiling at 18000 feet and are generally isolated so that routing around is usually only a small diversion, they also comply only with US/FAA standards. Restricted differ from an MOA in the frequency of use and level of activity, as such you are not required to contact the controlling agency before entering an MOA (even if active)[but you should for your own safety], you must contact the controller before entering a restricted area.

Warning areas are over coastal waters and are operated with consideration for ICAO standards, warning areas are individually larger than restricted areas and are mostly in a continuous series so routing around them can be more trouble.

The specific times, altitudes, and contact frequencies are listed on the legend portion of low altitude charts. They may be active by a regular published schedule listed on the chart legend, or by notam.

Not the answer you're looking for? Browse other questions tagged air-traffic-control airspace notam or ask your own question.

21
What is the reason for this route while flying from USA over Cuba?
9
Can a pilot fly through a restricted area while flying on a Victor Airway?
4
Is special permission required to take off from a field within restricted airspace?
4
Are there generic routes all pilots can fly?
1
Is there any ATS into the Special Use Airpaces (SUA)?
1
What is the difference between 'warning area' and 'ADIZ'? Are they overlapped with each other?

5
What protocol should be followed after accidentally entering restricted airspace with a UAV?
27
What should you do if you are forced to enter restricted or prohibited airspace?
8
What activities take place in the warning areas offshore of Washington, D.C.?
17
Restricted Area "popping up" around you -- can it happen, and what do you do about it?
4
What is the difference between SUA and SAA?
10
What documented practices are there for NOTAM creators and handlers to combat NOTAM spam?
11
What is the difference between published and unpublished waypoints?
7
Apart from Kenya, what are the current dangerous / unsafe airspaces?
1
What is the difference between 'warning area' and 'ADIZ'? Are they overlapped with each other?
4
Where does the FAA define the dimensions of Terminal Radar Service Area (TRSA) airspace?