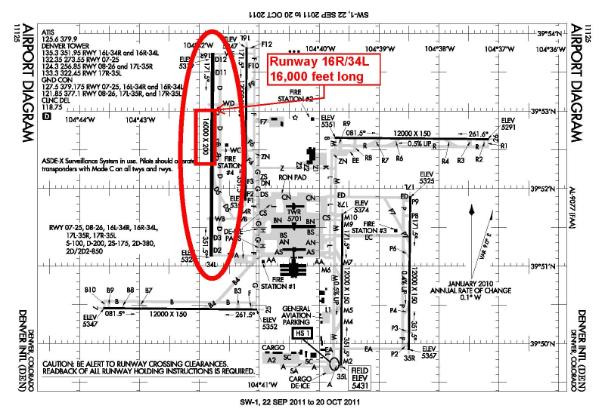 KDEN has a lot of runways, so they have the option of not always using some of them. As FreeMan pointed out, 12,000 feet is plenty for just about any aircraft flying in or out, even at 5,300 feet elevation. Being such a long runway, it may also be good to leave it open so that no aircraft need to be moved in case an aircraft declaring emergency would need the extra length. Runway use will depend on the wind and traffic, so depending on when you are observing, you may not often see conditions where it is used.

North flow: arrivals on 34L could interfere with runway 7/25, and for departures it is further from the terminal than 34R. TomMcW also points out potential noise abatement concerns.

South flow: departures on 16R could interfere with runway 7/25, and for arrivals it is further from the terminal than 16L.

Runway 16R/34L can still be used as a secondary runway though. It can certainly be used as 16R for parallel approaches with 16L, or departures as 34L with approaches on 34R.

To put things in perspective, Denver has more runways than both KLAX and KATL, which see more aircraft movements.

Also, while far from authoritative, the virtual Denver ARTCC lists 16R/34L as a secondary runway in all situations.

What time are you usually watching radar?
Just a guess, but the following paragraph from this document would suggest noise abatement procedures.

Runways 34L and 34R : Aircraft will be assigned headings of 355 to 010 degrees. Intersection departures on Runway 34L permitted if user has signed an agreement with the City and County of Denver regarding terms of use . The City may request that FAA stop allowing intersection departures if the City determines that use of the procedure is resulting in detrimental noise impacts

This map shows you might not want to buy a house off the north end of the runway!

Where the extra length becomes really valuable is takeoff during winter ops when the runways have enough snow on them that braking action (i.e. in the event of an aborted takeoff) is degraded, and the anti-ice systems on the aircraft are all running (reduces engine performance), and you have some really heavy aircraft. At that point, given the high altitude at KDEN, then the extremely long runway DOES become more advantageous than the others -- especially for those heavy weight & performance limited aircraft.

But for landings on good weather days when the airport has 6 strips of concrete (actually 5 at the moment, as 17L/35R is closed for repairs for some length of time) to choose from, you simply don't need them all. Departing on 16R probably won't happen, because it's such a long taxi from the terminals, but departing on 34L seems fairly common... depending on where you're starting from, it's no more of a taxi than runway 8 or 25. I've also landed (fairly recently, in fact) on 16R during good weather summer ops: arrivals from the west were getting 16R and arrivals from the east were getting 16L. Departures were using 17R (not an ideal runway for arrivals anyway, given the taxi back north to the terminals), and the east/west runways were either being inspected or temporarily shut down so they could reverse the flow (i.e. switching from landing 26 to departing on 8, and/or landing on 7 to departing 25, or vice versa).

And I've landed on 16L enough times with traffic for the parallel 16R close by, that I don't think I agree with the premise of the question.

You can check the typical runway configurations for any major airport in the US on the FAA's OIS webpage. (http://www.fly.faa.gov/ois/). On the left side of the page, click on East Directory or West Directory. Expand the directory tree under the ARTCC (ZDV for Denver, for example) desired and then click on the airport. The resulting table will show you typical configurations and the number of aircraft arrivals per hour that can be accommodated under each configuration.

5
Why are the runways on Denver Int'l very separated from the terminals?