Why aren't cell phones allowed to be used in aircraft?

What problems do cell phones cause? How is using a cell phone in the air different than using it from the ground?

Most of these cases apparently originate from a series of unexplained events in the 90s which were believe to be caused by electronic gadgets, hence the ban. This was when cell phones appeared, and there was an aggressive ban as a result. NASA has a list which includes some of these and makes for an interesting read.

Now however an increasing list of airlines is allowing them again, depending on jurisdiction. FAA is working on allowing it from a regulatory standpoint. Bear in mind that phones were probably much more powerful back when these rules were introduced.

Mythbuster (episode 6, 2006) did a test on this by sticking in a powerful transmitter into a business jet. Their website gives a slightly different version: It was the FCC, not the FAA, who led the way for this regulation:

Explanation: Never mind what the chatterbox in the seat next to you says about cell phones messing with plane navigation — those metallic birds are built airtight against foreign signals and operate on entirely different frequencies than cell phones.

So why all the fuss about phones? When you make a call at 10,000 feet, the signal bounces off multiple available cell towers, rather than one at a time. That means too many phone-happy jetsetters might clog up the networks on the ground, which is why the Federal Communications Commission (FCC) — not the Federal Aviation Administration (FAA) — banned cell use on planes.

How is using a cell phone in the air different than using it from the ground?

Is it sensible to allow them on aircraft? To quote one of the above sources:

although the FAA recommends that you still switch to airplane mode because you’re not going to get a signal 30,000 feet in the air — the only hit you’ll take is a dead battery when you land.

So it's probably not a huge loss if you're flying commercial aircraft at 10,000 meters. In any case, you can't expect a service like you do on the ground, unless like Lnafziger says that the aircraft is equipped with a cellular basestation called a Picocell, illustrated below: 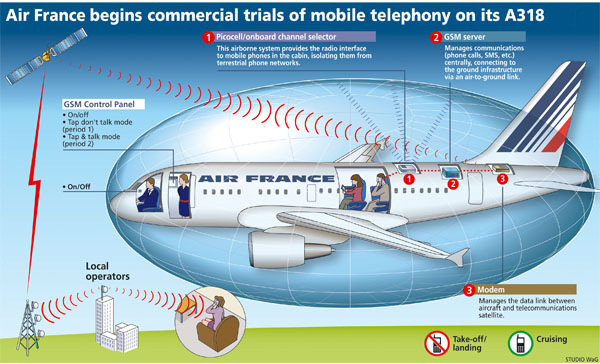 I am a private pilot, and sometimes, the cellphones cause interference with the radio. Most of the time, cellphones are not a problem, but once in a while, I have to turn mine off because it is causing parasitic noises on the radio.

I don't know how bad it would actually be in a passenger aircraft. But if it is similar to my experience in small aircraft, then it would be easier to just ban cellphones, rather than have a little light (like the seatbelt light) indicating when you can or can't use your phone.

Apart from Manfred's answer, there are other factors in play:

Cell networks require that cell towers be able to distinguish between signals coming from phones which are within the zones served by the towers, and those coming from phones in more distant zones. There are nowhere near enough radio frequencies or time slices to allow every zone in the US to have its own combination of frequency and time slice. In general, however, since the amount of signal received from a phone that's transmitting at a particular power level will drop off in proportion to the square of the distance, arranging zones so that the closest phone outside of a zone that will use a particular frequency/time-slice combination will never be less than be 3 times as far away as the furthest phone within the zone will generally make it possible for towers to receive the signals from phones within their service zones without too much interference from phones in other zones.

If a phone which is on a plane, 30,000 feet above the surface, transmits a signal which is loud enough to be heard by a tower serving a zone directly below, that same signal is likely to be received almost as well by towers for quite a ways around, some of which might have been expecting to use the same frequency and time slice to serve their own zones. A cell network might be able to recognize the situation and assign frequencies and time slices in such a way as to avoid interference, but a single phone call from a plane might tie up ground-level bandwidth resources in multiple zones which, but for that call from the air, could each have used those resources to handle a separate call.

What problems do cell-phones cause?

The FAA believes they could cause controlled flight into terrain.

Airlines have been ordered to replace or modify the cockpit display units fitted to hundreds of Boeing jets.

The US air safety regulator said that tests had indicated that mobile phone and computer signals could cause the screens to go blank.

"We are issuing this AD [airworthiness directive] to prevent loss of flight-critical information displayed to the flight crew during a critical phase of flight, such as an approach or take-off, which could result in loss of airplane control at an altitude insufficient for recovery, or controlled flight into terrain," it said.

I am not myself a pilot, but I have a number of friends that pilot small private aircraft and use cellphones while in flight. At altitudes of 10 or 12 thousand feet and speeds of 150 kph they work just fine.

People say they might 'interfere' with the aircraft. But if the electronics in aircraft are really so susceptible to interference, why are you allowed to use cell phones in the airport?

I think you'll find that cell towers have enough problems supporting users on the ground with the spectrum available without having to point the antenna skywards in the hope of supporting flights. The mention of a picocell on an aircraft would work but this requires expensive back haul over a satellite link and the time delays that incurs.

if we use a cellphone in an aeroplane it might disturb connection between the controlroom and plane and also between radar. which will be dangerous that it makes unable to connect the control room for an emergency.

Not the answer you're looking for? Browse other questions tagged safety passenger electronics cell-phone or ask your own question.

3
Why did FAA regulations initially prevent passengers from making phone calls during a flight?
0
Why turn mobile phones off on take off and landing?
1
Why do you need airplane mode on a device for a plane trip?
0
Why do some nations allow the usage of hand held devices and some not throughout the landing till the take off
57
Instrument landing: why do all electronic devices need to be shut off?
22
How are credit cards processed during flight?
20
Can I use cellular data to receive in-flight weather on my iPad?
9
Why do I have to turn off my (non-cellular) iPad before takeoff?
11
How do airliners facilitate in flight calls for mobile phones?
3
What is the best way to retrieve (and transmit) location (GPS) of plane in real time?
See more linked questions

11
How do airliners facilitate in flight calls for mobile phones?
8
Have objective and verified tests been done of the effects of personal electronic devices on a commercial airliner's operation?
4
Can a GA headset be used for listening to normal audio or with a cell phone?
4
Why are passenger required to put their phones in Airplane Mode during taxi to gate?
1
Why don't airlines install Faraday cages in their planes?
9
Do pilots switch their cell phones into airplane mode?
8
Why aren't "radioactive items" allowed on flights?
13
Has a passenger's consumer electronic device ever actually caused a crash?