Why doesn't GE replace all 4 engines for on their flying test bed instead of just 1?

GE (General Electric) flies Boeing 747s equipped with new engines that are being tested. Why can't they equip the test airplane with all 4 of the new engines? Wouldn't the thrust be imbalanced by replacing only 1 engine? As you can see, it may have 1 big engine and 3 smaller ones:

Other times, smaller engines are being tested. Would the smaller engine provide enough thrust for a large, heavy airplane like the 747? 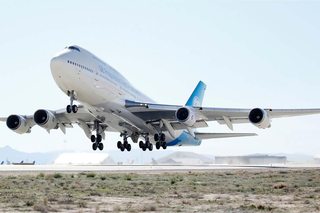 They only change one, because that one is a new engine that is being tested.

If you are testing a new engine you change 1 at first so if it fails you have 3 others. If you change all 4 and there is a systematic defect in the design, now you have 0 good engines instead of 3.

You will also see that the test engine isn't always one suitable for a 747. This is because they may be testing a new design or a new alternative fuel and it is safer to test an unknown with 3 good engines (e.g. a 747) rather than with just 1 good engine (any two-engine airplane). This increases the safety margin if the test engine fails.

The other advantage to doing this on a 747 is that a 4th engine is technically not really needed as a 747 can takeoff, fly and land with only 3 operating engines.

They are not testing that the engine works, that's already been proven with hundreds of hours of regulated and rigorous ground running. They are testing the "on wing" systems and behaviours in various flight conditions.

The on wing systems will also have been tested in ground runs before the first flight.

Therefore, only one engine is needed.

Although you already have a correct answer and it is accepted too but i would add another point to the mix. They are testing a new engine which uses a new technology and is uncertified/unproven. Why should they make 4 of that version and then find out a number of things to fix and go back to all 4 of them first before moving on to produce more models? That costs a lot of money and time.

Wouldn't the thrust be imbalanced?

Even on our R/C Aircrafts we can have different engine RPMs for different engines (on a multi engine model), let alone a Jumbo Jet! They can all operate at different turbine speeds and different thrust levels to balance as and when needed.

Not the answer you're looking for? Browse other questions tagged aerodynamics jet-engine boeing-747 flight-testing or ask your own question.

50
Why does this 757 have a propeller engine attached to the fuselage?

10
Is there a real risk of ingesting FOD into jet engines when using thrust reversers?
24
Could most commercial jet engines today run on ethanol without any problems?
1
What is the drag induced by a high bypass jet engine on an airliner?
6
What are the consequences of attaching an unused extra engine under Boeing 747 wing?
4
What would be the impact of replacing the engines on the 737 MAX, not just reworking MCAS?
32
Why don't modern jet engines use forced exhaust mixing?
16
Was a six-engine 747 ever seriously considered by Boeing?
1
Why weren’t large, high-power radial engines built to take advantage of the Meredith effect?
19
What is the upper deck on converted freighter long-hump 747s used for?
1
How do power and thrust curves compare?