What airplanes can I fly with an EASA PPL license?

Weird as it might seem, I'm not 100% sure what airplanes I can fly with an EASA PPL(A) license. During the training the instructors would tell me that I can fly airplanes up to 2000 kg MTOW and 5 passengers or so, but I think they are wrong and this applies only to the (old) national rules (Germany in this case).

The license states that I have a SEP (land) class rating. I have searched through the EASA rules (a cumbersome task on its own) and nowhere could I find a weight or passenger limit, nor a specific definition of what exactly qualifies as a SEP.

So the question is, what aircraft am I entitled to fly with my PPL(A) license? Do aircraft with specificities such as a retractable gear fall into the same category? Please also point to the source of the applicable legislation.

By the same token, may I/may I not fly light aircraft such as e.g. a K-10 Swift?

I was wondering about the same and here is what I found.

Yes, for LAPL license holders, when switching to another airplane within the same class rating (don't mix it up with type rating) the familiarization training shall be performed and signed off by instructor. It's stated in the "FCL.135.A LAPL(A) — Extension of privileges to another class or variant of aeroplane" section of the "Part FCL".

Before the holder of an LAPL can exercise the privileges of the licence on another variant of aeroplane than the one used for the skill test, the pilot shall undertake differences or familiarisation training. The differences training shall be entered in the pilot’s logbook or equivalent document and signed by the instructor.

There is no such requirements for PPL(A) holders. 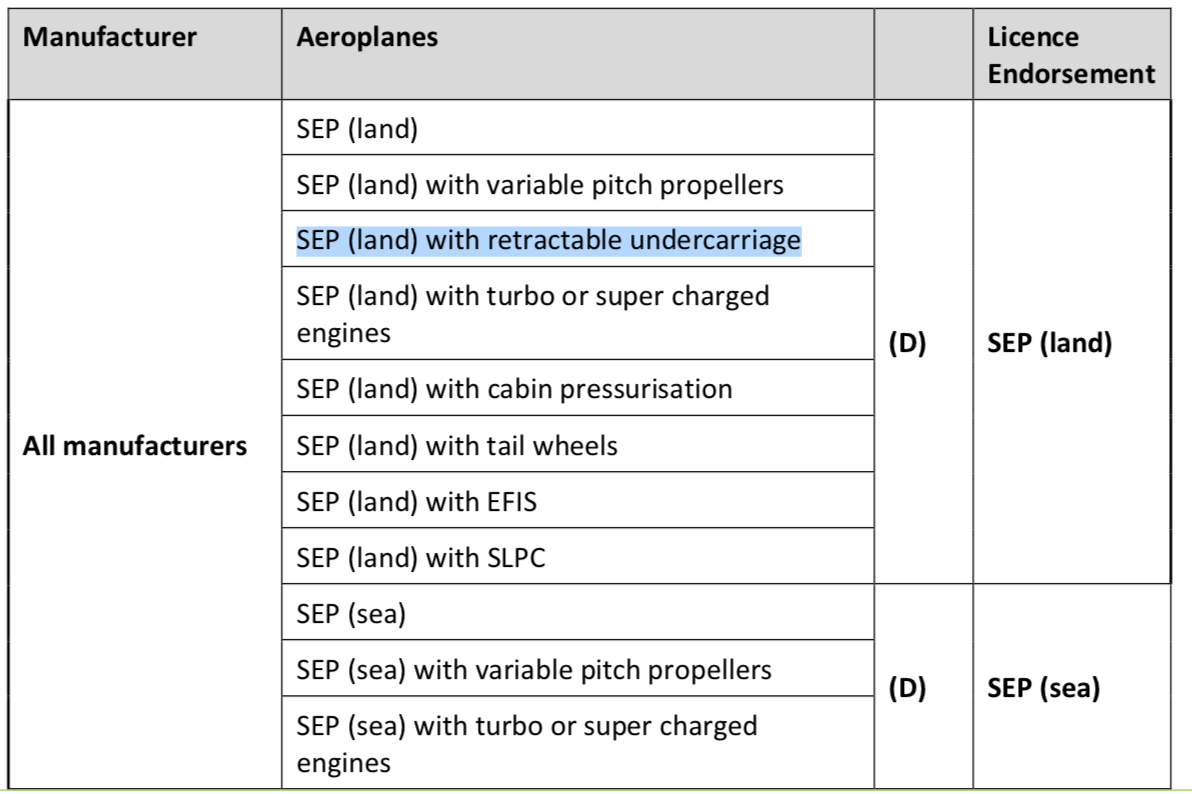 All those are aeroplanes. The D to the right means that

Whenever (D) is indicated in one of the lists mentioned in paragraphs (a) to (c), it indicates that differences training in accordance with FCL.710 is required.

Ok, going down to the "FCL.710 Class and type ratings — variants" where we have

In order to extend his/her privileges to another variant of aircraft within one class or type rating, the pilot shall undertake differences or familiarisation training.

I don't know why aircraft is used in this section instead of aeroplane, but later again it's explained as

(a) Differences training requires the acquisition of additional knowledge and training on an appropriate training device or the aircraft.

(b) Familiarisation training requires the acquisition of additional knowledge.

Conclusion: the minimum required is "Familiarisation" which is just "acquisition of additional knowledge" which has no any requirements for legal sign off or so.

You can fly any airplane with PPL even B737 if you own one. Well to fly B737 you will need IR, ATPL exams as it's multi crew airplane, MCC and TR. I don't know if it makes sense but you can put everything on PPL if you want.

You only have SEP so you only can fly SEP airplane. SEP is just any airplane with single piston engine. But CAA can decide to require TR for any aircraft if they consider it to be complex...

If you get IR and TR and you can fly private jets without problem with PPL. But you see that to get everything you will need to know the same theory as for ATPL license.

As for K-10 Swift it's Ultra Light aircraft. Regulations differ by country I think. In my country CAA doesn't issue ultralight licenses but ultralight planes association. General rule is that you will need difference training.

With an EASA PPL(A) you can fly single engine piston aircraft, for example the Cessna 172 or the tiger moth

My understanding is that if you are not flying for commercial purposes the PPL has no limits on the aircraft weight or complexity. You must however have a Type Rating for the aircraft beyond Sep if required.

I have flown a few fast jet types on a PPL with a CAP632 which can be issued by any qualified instructor if they are satisfied you have met the military training standards. Hope that helps.

Not the answer you're looking for? Browse other questions tagged easa-regulations ppl or ask your own question.

2
What is required for an EASA pilot to fly an airplane with retractable gear, flaps and variable pitch prop?

28
I have a European EASA license - what do I need to do to be allowed to fly in the US?
10
May I fly an aircraft registered in an EASA member with an EASA licence (NOT same country as airplane) outside Europe?
12
What is allowed with the new EASA SPL license?
9
Can hours at an FAA flightschool be credited to an EASA PPL?
3
Is an RT license required for EASA PPL holders?
5
Can you become a CFI with only a PPL (EASA)?
5
Can a Greek EASA Part 66 License be converted to a German EASA Part 66 License?
10
Is it possible to fly an EASA registered airplane with an ICAO license?
2
What is required for an EASA pilot to fly an airplane with retractable gear, flaps and variable pitch prop?