Often when approaching landing, I feel the aircraft slow down considerably, it hasn't landed yet, but kind of hovers around waiting for clearance to land. Thus I was wondering, is there any defined minimum cruise speed for airliners.

It's called the stall speed. Below which the wings won't give enough lift to stay airborne.

Another minimal speed to adhere to is the minimal control speed. Below that the controls surfaces won't be able to counteract suddenly losing an engine.

However slowing down before landing has nothing to do with waiting on their turn/clearance. If they need to wait they go around in a circle instead.

The slowing down is so they touch down with as low speed as possible to limit the braking distance needed on the runway.

The lift a wing is able to generate is proportional to square of speed¹. If the aircraft is moving through the air too slowly, it will stall², pitch down and start to descend rapidly.

So a fixed-wing aircraft³ must move at least some speed, called stall speed or $V_S$. And normally some margin error should be left, so the aircraft never flies slower than about $1.3×V_S$.

What the $V_S$ is depends on the aircraft and the weight. Because lift is needed to balance weight, less weight means less lift is needed and thus less air flow to generate it. For jet airliners the stall speeds may range from around 100 knots when light (~185 km/h, ~115 mph) to maybe 130 knots (~240 km/h, ~150 mph) when loaded⁴.

On the other hand, at altitude below 10,000 ft, maximum speed of 250 knots (~463 km/h, ~288 mph) is usually defined so the pilots have enough time to see each other when flying near the airports under visual flight rules or in case the controller makes a mistake.

² Lift is proportional to dynamic pressure and angle of attack. At slower speed the wing flies at higher angle of attack, which is how the nose of the aircraft still points up when it is approaching to landing. The wing is able to provide more lift up to critical angle of attack above which it stalls.

³ Rotorcraft (helicopters) create the air flow by rotating their wings instead and therefore don't need any forward speed. In fact they stall when flying too fast instead when the retreating blade is no longer moving aft fast enough.

⁴ These are values for high lift devices (flaps and slats) deployed. With them retracted, the stall speed is higher. The stall speed also depends on the relative wing area of particular aircraft. For example A318, A319, A320 and A321-200 all have the same wing and therefore the same stall speed at the same weight, but they have different size and therefore different typical weights. There is similar difference between say B737-700, B737-800 and B737-900.

The minimum speed at which the aircraft can fly (cruise) is called the stall speed. At this speed, the lift is equal to the aircraft weight.

The lift L is given by,

$C_{L}$ is the lift coefficient, $\rho$ is the density at that altitude and $S$ is the wing planform area. During level, unaccelerated flight, the lift is equal to weight.

This gives the stalling speed as,

This is the minimum speed at which the aircraft can fly. Note that it depends on three things: the Weight of the aircraft, the density of the air and the $C_{L_{max}}$ of the wing section.

During landing, two things happen: the weight is lesser (compared to takeoff weight), and the flaps are deployed, which increases the $C_{L_{max}}$, which in turn reduces the minimum speed required for flight. This is the reason you're feeling a reduction in speed. 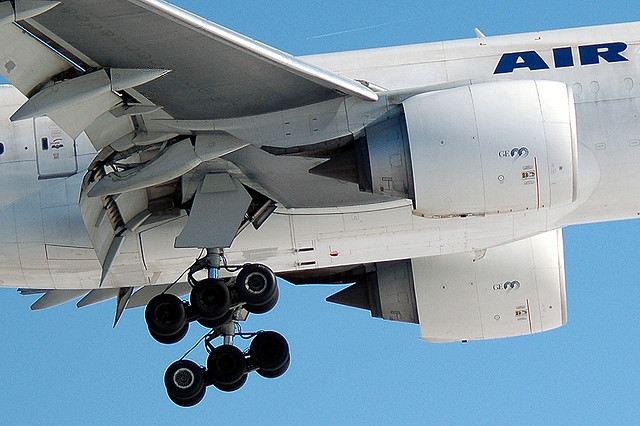 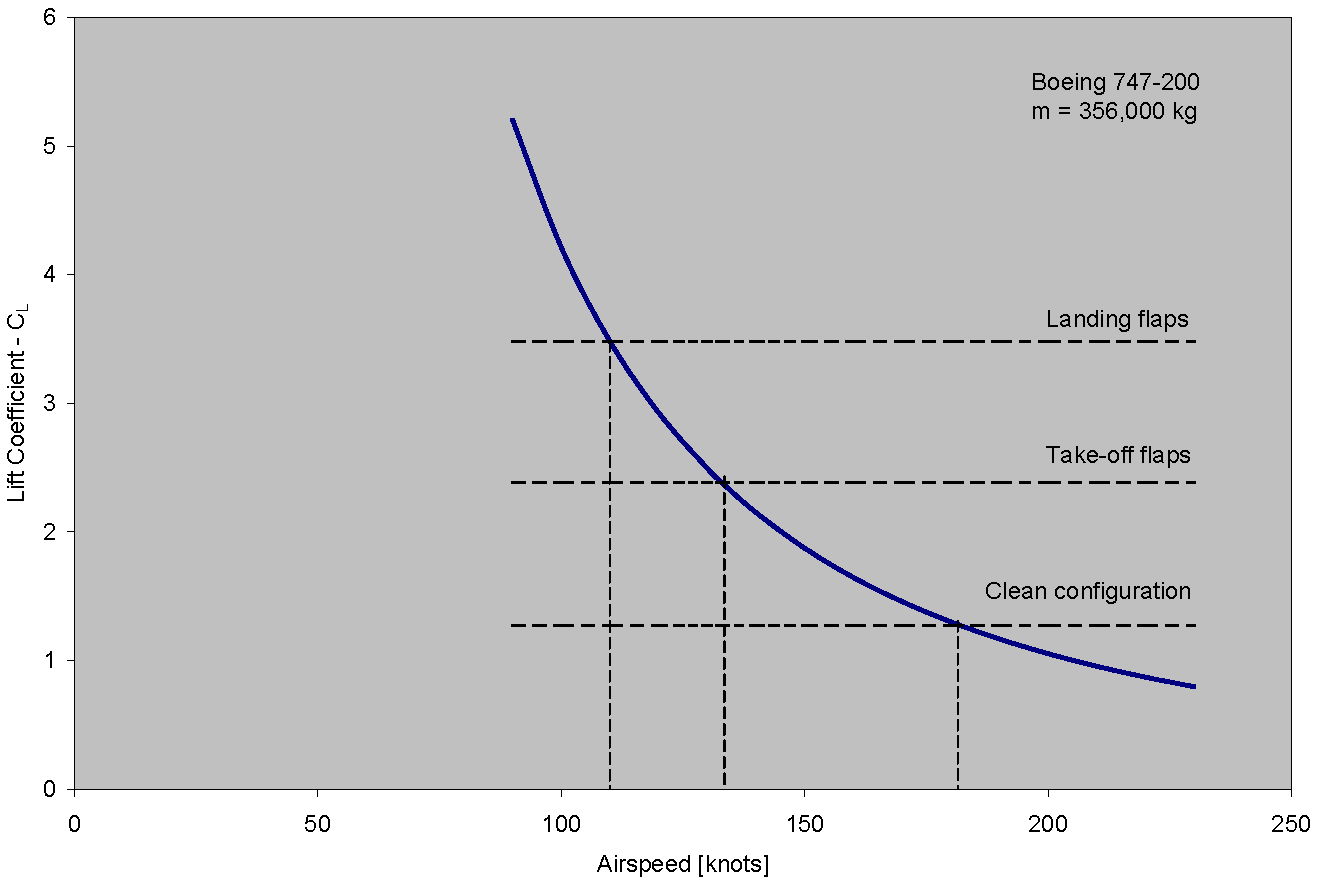 Arguably, an aircraft can cruise at any speed as long is it does not stall. However, sometimes, ATC will notify a flight crew and tell them to maintain a certain airspeed due to traffic or other factors. Keep in mind, stalling is not based on speed as much as it is based on AOA (angle of attack). Angle of attack is the angle that the air meets the wing (in case you did not know). Stalling is when the airflow over a wing becomes broken and turbulent or separates from the wing. To a certain point, a higher angle of attack will grant more lift (that is the point of flaps). However, it can be dangerous since it can also induce a stall.

The above picture displays what I am trying to say. So as long as critical angle of attack is not reached, an aircraft can technically fly at any speed upon landing (although ATC will often request airplanes to keep airspeed relatively high or low so traffic runs smoothly). The book, "Stick and Rudder" has an enormous section on AOA, among many other things.

31
What is the immediate cause of stall?
17
On Air France 447, what would have been the lowest altitude to initiate recovery after the stall developed?
9
How is an off-field landing accomplished at night?

8
Why is the XB-70's Top speed only about 60mph higher than its cruise speed?
3
How long after takeoff for a Boeing 747-400 to reach cruise speed?
8
How is the airspeed-Mach number transition handled in modern airliners?
3
What's the speed callout by the PNF on airliners for?
0
Why is the normal operating airspeed so much lower than the cruise speed in this table?
4
Are there locations/altitudes with minimum speed requirements?
2
What's the relation between TAS and Mach in tropopause?
4
How can the cruise speed be larger than Vne?
12
Is it possible for a plane to accelerate easily from 30 to 45 mph in flight while it struggles to reach 30 mph (the engine runs at constant power)?
7
Could airliners fetch data like AoA and speed from an INS?