Why are ARINC labels are transmitted LSB first?

Why are ARINC labels reversed before transmitting them to destination and the LSB (less significant bit) is transmitted first:

Is there any particular advantage over formal transmission and label reversed transmission?

Also all systems are designed for odd parity. Why is that?

The ARINC 429 frame is composed of 4 bytes (32 bits numbered by convention 1 to 32 from right to left). Bits 11 to 29, which are the payload of the frame, can represent data using different formats, e.g. binary or BCD data. The label is used to indicate the content of the data field, and which format is used, and is necessary to convert data bits into useful information.

The ARINC 429 data bus is composed of 2 wires and the ground reference. When an ARINC frame is transmitted on the bus, it must be serialized, which means sending bits one at a time. The transmission order is:

So let's assume there is no reason to reverse the label bits, other than historical implementations that wanted to mimic the behavior of CAN. In the French version of this Wikipedia article, it is stated that this reversal helped to read the label when looking at a frame using an oscilloscope. The MSB arriving first also appears on the left of the display (the signal on an oscilloscope generally enters on the right of the screen and scroll towards the left side as a function of the time):

I'm a bit baffled by this explanation, as engineers working with binary representations are used to read them is both directions quite easily after a short time.

Still according to Wikipedia, hardware used to serialize and de-serialize the ARINC word were actually insensitive to the order of the label bits:

ARINC 429 transceivers have been implemented with 32-bit shift registers. Parallel access to that shift register is often octet-oriented. As such, the bit order of the octet access is the bit order of the accessing device, which is usually LSB 0; and serial transmission is arranged such that the least significant bit of each octet is transmitted first. So, in common practice, the accessing device wrote or read a "reversed label" (for example, to transmit a Label 2138 [or 8B16] the bit-reversed value D116 is written to the Label octet). Newer or "enhanced" transceivers may be configured to reverse the Label field bit order "in hardware."

It is usual in digital serial communication to use data value changes (0 to 1 or 1 to 0) to derive a clocking clue in order to ensure the receiver samples the line voltage at the right time. This is less expensive than transmitting the clock signal on a separate wire. As each bit lasts the same time, the receiver uses a local clock that is roughly in sync with the transmitting clock. To actually maintain the synchronization in the long term, the receiver uses the raising and falling edges of the signal to detect bit borders and phase-align its clock. 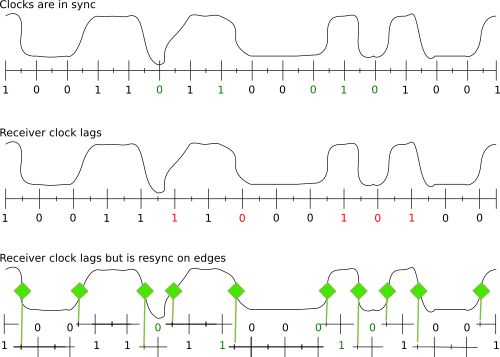 That works well if the delay between edges is short. This means avoiding sending long series of 0 or 1. The parity bit can help. For data containing only 0 bits (or 1 bits) the odd parity bit will be 1 (or 0), preventing long edgeless streams to occur.

In some uses of ARINC 429, the parity bit is not transmitted, and is used for data, but nevertheless it seems superfluous for sync in this case since the link protocol is 3-level with return to zero, ensuring two edges for each bit of data.

I have an idea that is used in some other cases and I think that the reason in this filed is also the same. Suppose that we must take a decision from incoming code or number, which bit of number gives us more information, MSB or LSB? Of course MSB has more information especially for estimation of magnitude of the incoming number. In some microprocessors, the high bits of instruction codes show us the instruction group. As an example, in Z80, if the first two MSB bits of instruction be 01 immediately we conclude that we have a register to register data transfer (LD r,r’) and we can prepare the hardware for executing the instruction. Now if we need some preparation for receiver hardware before completion of incoming label bits, so we prefer that giving the MSB bits at the first.

Not the answer you're looking for? Browse other questions tagged aircraft-design software aircraft-subsystem or ask your own question.

2
Are there any EU/EASA regulations surrounding aviation software?
36
Why are First/Business Class seats at the front of aircraft where it is the least safe?
4
Why are the cockpit displays swapped between the captain's and first officer's sides?
6
Why don't DO guidelines have examples?
13
Why is the MD-80 magnetic compass behind the first officer's seat?
6
Why is there typically a large gap between the first flight and mass production of aircraft?
6
Are the captain's and first officer's brake pedals always mechanically linked?
35
Why were the first airplanes “backwards”?
1
Why don’t flying-boom tankers have collapsible/frangible/breakaway refuelling booms?