Would turbulence created by two jumbos less than 100ft apart cause both of them to crash?

In a scene from Spider-Man 2 (2014), which you can see in this video, two jumbos almost collided. At the last possible moment, the pilots were able to save their planes, but both planes came to within 100 feet apart from each other (I guessed the distance). Both planes survived.

I wonder in real life with real science and no Hollywood involvement, could any plane survive this close encounter with another jet?

The probability of two jets surviving such a close encounter are extremely remote.

Setting aside the fact that it is difficult to imagine two aircraft flying in the same altitude in opposite directions (commercial aircraft are separated by 3 miles laterally and 1000 ft. vertically) ,if the scenario unfolds as in the movie and the horizontal separation between the aircraft on approach is as shown, the pilots would not have time to react and take the necessary evasive actions.

Assuming that the jets are cruising towards each other at 900 kmph, the combined speed is around 1800 kmph, or half a kilometer per second.

If the TCAS is not working and the aircraft come within five km (the distance in the video is considerably lower, less than a km) of each other, the pilots have less than 10 seconds to get out of each other's way.

The civil aircrafts are not designed for such rapid roll rates. The inertia of the aircraft (especially the 747) will limit it.

Another thing to note is that the modern flight control systems will not allow airline pilots to carry the maneuvers shown in the flight. The pilot can override the Flight control Computer.However,in this case, they would not have time to react.

If by some miracle the aircrafts cross each other, they will fly right into the other aircraft's wake turbulence, which will have disastrous consequences, especially for the smaller aircraft. 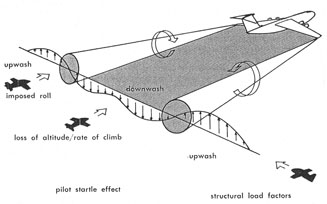 In case of small aircraft flying behind a heavy jet, FAA regulations require a minimum separation of 5 miles, lesser than which the effect of the wake turbulence (wingtip vortices) can have serious consequences.

FAA conducted a test on the effects of wake turbulence by flying a 737 behind a 727, which shows the loss of control associated with flying in the wake of another aircraft.

Once (if) the aircraft pass each other, they should be brought to level flight as quickly as possible (whether it is possible or not is another question) to prevent stall. In this critical juncture, if the aircraft wings encounter wake turbulence, the control of the aircraft will be loss, resulting in stall.

Finally, in case two aircraft do approach each other in the same altitude in opposite directions, there are laid down procedures to follow. None of them involve the stunt shown in the movie.

When two aircraft are flying head on, each must move to their right. 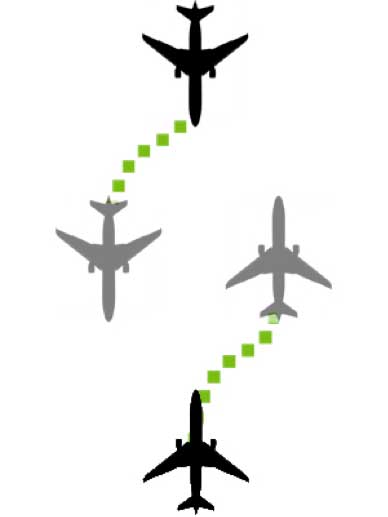 If two aircraft are at the same height and on converging courses, the aircraft with the other on its starboard side has to give way. 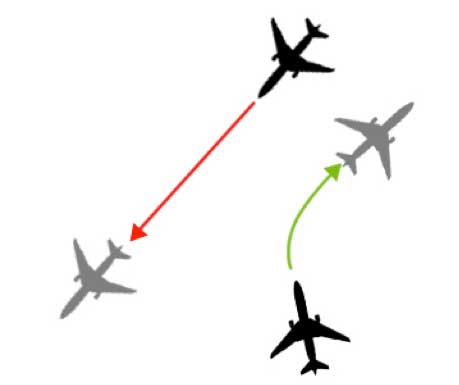 Wake turbulence is a serious problem if flying too close to another aircraft, for example if a light aircraft follows a larger aircraft, the sheer amount of air and wind speeds involved could cause a loss of control and possible subsequent damage to the aircraft if not rated for aerobatics (or if close to the ground). You have to stay quite a long way behind a larger aircraft when approaching to land to be sure of not encountering it.

However if encountering wake turbulence from an aircraft of a similar size, while you would most definitely feel it, I don't think it would cause a loss of control.

Even so, when flying in formation aircraft stay away from the others wake turbulence because although I don't think it would cause them to crash it would be uncomfortable and the formation wouldn't look smooth if at an airshow for example.

To answer the other part of your question - would it affect the aircraft in front? Only if the aircraft behind lost control and hit it, as was thought to happen to Joe Walker who was flying a F104 and hit the aircraft he was chasing causing both to go down

Not the answer you're looking for? Browse other questions tagged safety aerodynamics aircraft-performance or ask your own question.

13
Why is it not a good idea to climb higher than a level at which you would have a cruise weight-climb speed less than 500 ft/min?
3
Are new airliners less safe than older the two first years after they are marketed?
8
Why was the Graf Zeppelin's endurance when fully fuelled with both fuels less than the sum of its endurances with each fuel separately?