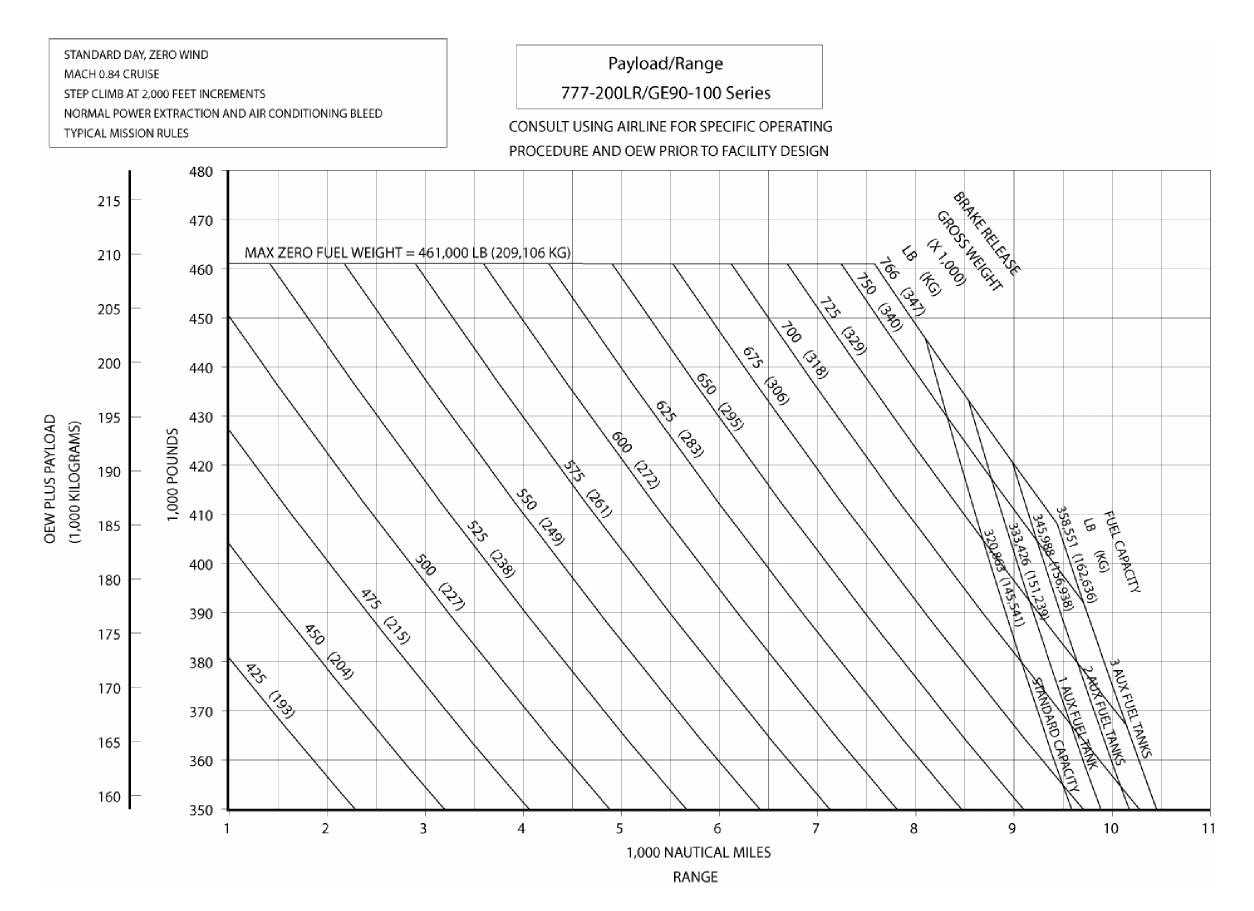 The maximum payload range is around 7600 nmi, and after that payload have to be reduced in order to increase range. While the Operating empty weight of 777-200LR is 320Klbs, the horizontal-coordinate(range) of the diagram is around 10500nmi at 350Klbs, and there is a gap of 30Klbs.

Does that mean B777-200LR has theoretical maximum range over 10500 nmi if OEW plus payload is below 350Klbs? And how far can it fly potentially?

The vertical axis starts at 350 Klbs since the Boeing 777 is made to transport payload, not just itself. Any operator will be interested more in the upper part of the diagram, because only then the aircraft will earn money. This explains the gap of 30 Klbs - the people for whom this chart was made are simply not interested in the range without payload.

The range varies with flight parameters, and the upper left corner shows the most important ones, albeit in quite imprecise terms. If the flight speed is reduced, range will become higher until the aircraft flies at optimum range conditions. Airlines like to fly their aircraft faster that that to optimize transport performance (the maximum product of speed and payload relative to operating cost). If power extraction and air condition are run at their bare minimum, again less fuel will be needed per mile of flight. Flown this way, the 777 will easily fly more than 10500 nm with a zero-fuel weight (OEW + payload) of 350,000 lbs.

To eke out the maximum possible range, high-density fuel is used and the aircraft is flown at an optimum altitude and speed for range. The records which have been set this way (11,664 nm for the 777-200ER), however, are of little relevance to everyday operation. The longest commercial flight of that type will be the Dubai-Panama City connection of 7,463 nm which Emirates will begin to serve on February 1, 2016.

Not the answer you're looking for? Browse other questions tagged boeing-777 range or ask your own question.

46
How do airliners get from the factory to the client if the aircraft does not have the required range?
30
How does wind affect the airspeed that I should fly for maximum range in an airplane?
4
How can you find the best altitude for range or speed?
7
Could Mach 1.4 be a better design point for SST?
-5
Which is a longest flight in the world?