How does CDI work when flying to VOR without DME?

Let's show what I mean on an example.

based on this example CDI needs to know distance from VOR to work properly, yet it works without knowing the distance. How?

(If I'm wrong about something, quickly correct me)

This is in contrast to a CDI slaved to GPS, which indeed indicates lateral distance from the selected track in miles (en-route; GPS approach has to simulate ILS).

VOR does nothing with DME. DME is completely independent piece of equipment that was introduced later than VOR. The only relation is that there is a standard correspondence between VOR and DME channels and the DME receiver automatically tunes to the DME frequency corresponding to the VOR or ILS frequency tuned on your VOR/ILS receiver.

This is because the VOR is displaying a difference in angular position: how many degrees of arc you are away from the desired course. The OBS knob on your CDI is selecting a roughly one-degree wide corridor that you want to be within, which is a pie-shaped wedge around the radial you've selected.

That wedge extends out from the VOR, getting wider as you get further from the station.
To illustrate, look at the 50-degree wide corridor highlighted in yellow below: 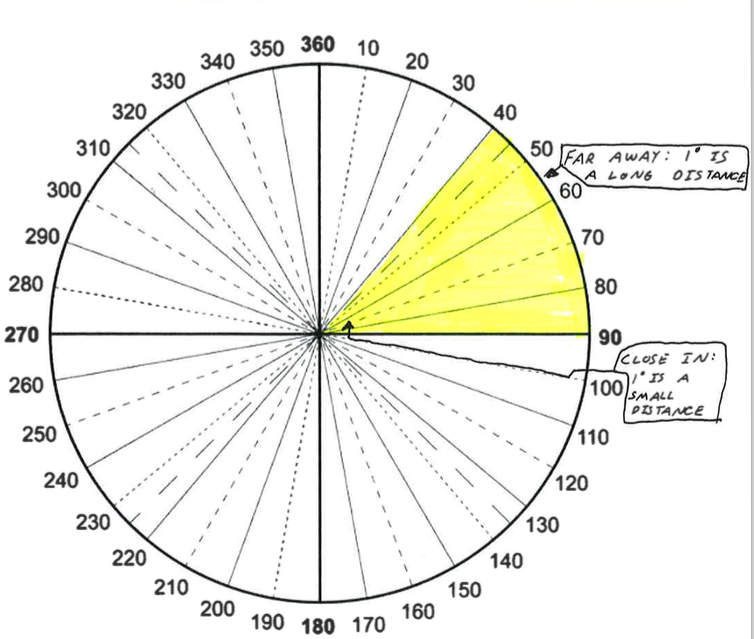 This has two practical sets of effects on VOR navigation:

Not the answer you're looking for? Browse other questions tagged vor or ask your own question.

11
How does the VOR receiver pick up the signal and how are the needles controlled?

11
How does the VOR receiver pick up the signal and how are the needles controlled?
9
When is a VOR shown on maps?
7
Why do we need DME or RNAV when using VOR navigation above FL240?
7
Why would a VOR be decommissioned leaving the DME?
1
Calculating distance from VOR station with radial and heading
1
How does the ICAO VOR separation apply to reciprocal radials?
4
Having trouble reading some charts (SBMG-SBLO)
3
How do you calculate the deviation from an RNAV waypoint radial?