Who to call for flight following?

I was up this past weekend on my first solo cross country and decided to request VFR flight following and was a bit confused at what happened. For this question I will set up the actual situation as an example.

I was over the Pottstown VOR (PTW) heading to Lancaster (KLNS) on the 269 radial. I decided to call Reading (KRDG) approach for flight following as they were the closest approach or so I thought. They informed me that I was still in the Philadelphia airspace and advised to contact them. Now in the past (with my instructor) on the same flight in just about the same location we had taken flight following from Reading approach.

How do you know who to hail for flight following?

I was in the Philadelphia Mode C veil, is that why they sent me to Philly Approach?

When you request flight following generally you contact the facility (either approach or center) responsible for the airspace you're in, so your real question is "How the heck do I know whose airspace I'm in?!"

The answer can usually be found on the charts, or in other FAA publications.
Let's look at your example (I was over the Pottstown VOR (PTW) heading to Lancaster (KLNS) on the 269 radial.) in detail with some convenient visual aids.

Preflight Planning and the A/FD

You don't tell us what airport you took off from, but I'm going to assume KPTW (Heritage Airport) as a convenient starting point.
If we have a look in the Airport/Facility Directory for KPTW we'll get an answer very quickly from the "Communications" section: 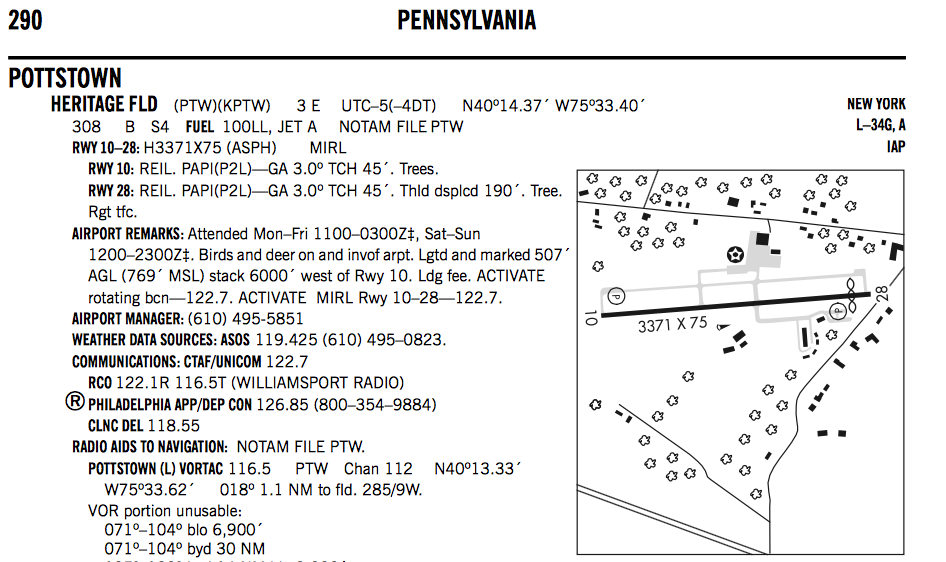 So if we're planning a flight out of KPTW and intend to pick up flight following our call to ATC should be made to Philadelphia Approach, on 126.85 (and if we're going IFR and need to talk to them on the ground there's a convenient phone number).

If you have an application like Foreflight or Garmin Pilot this information is readily available to you in the cockpit as well, so if you're unsure who to contact you can always pull up the A/FD information for the nearest airport and use that as a starting point.

Let's say you didn't remember to look in the A/FD to see who you needed to talk to while you were on the ground, and the battery in your iPad is dead so Foreflight is out of the picture in the air. You can pull out your paper charts and get most of the same information in flight.

If we plot PTW ... KLNS it puts you on the very bottom of the New York Sectional Chart, and on the Philadelphia Terminal Area Chart for part of the flight, so let's take a closer look at the route on each of those. 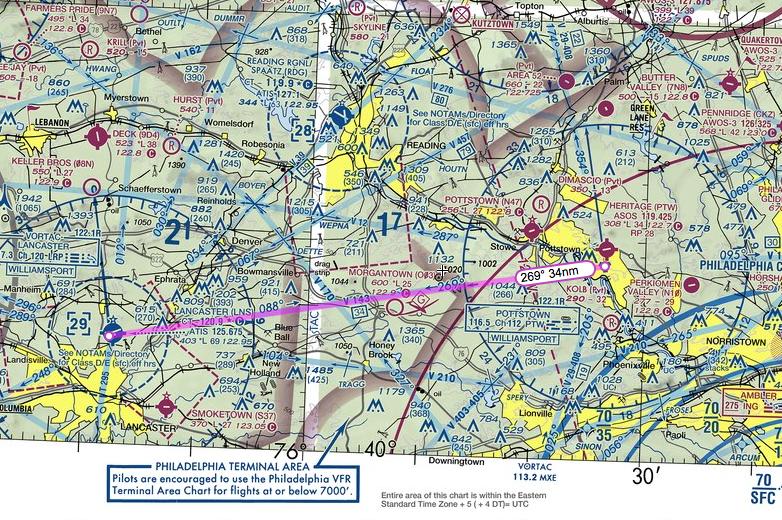 Not much help here - or at least nothing glaringly obvious.

Let's look at the Philadelphia TAC: 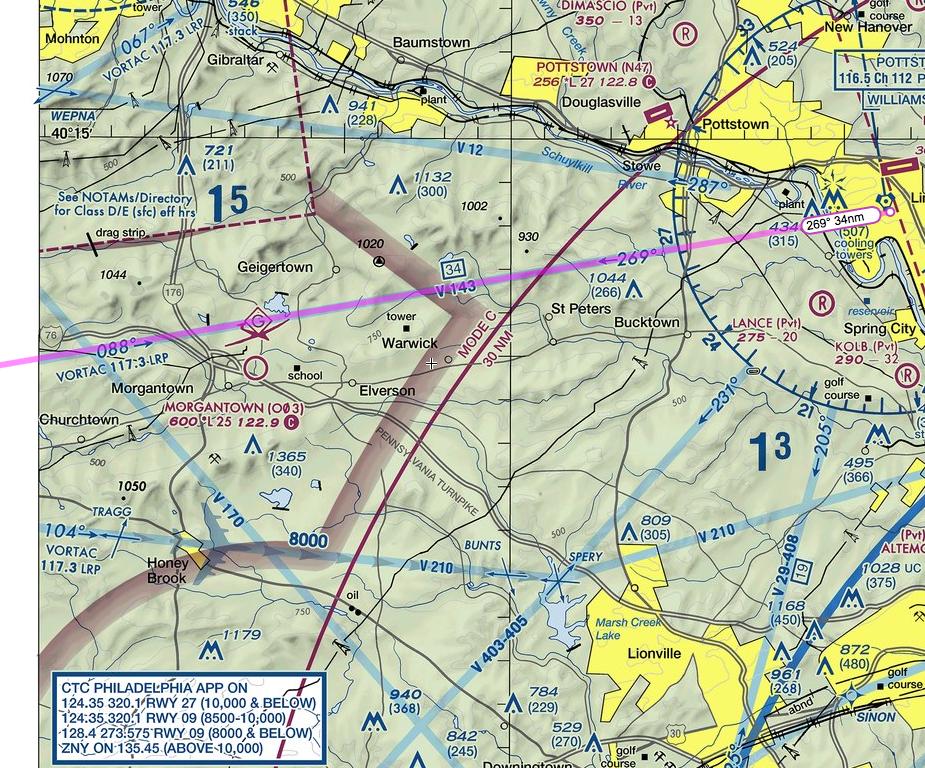 AHA! There are helpful white boxes with blue text on this chart that tell you CTC PHILADELPHIA APP ON and list frequencies, altitudes, and active runways.
This looks promising: Since the little box says to contact Philadelphia Approach that's who you should probably call first.

In your case there happen to be two helpful boxes, one above your route of flight and one below it. Both boxes are roughly equidistant from the route of flight, so it's not obvious which one you should pay attention to. In cases like this you can call on either frequency (at least you're calling the right facility - they may make you call on a different frequency and talk to another controller, but you're in the right neighborhood at least. 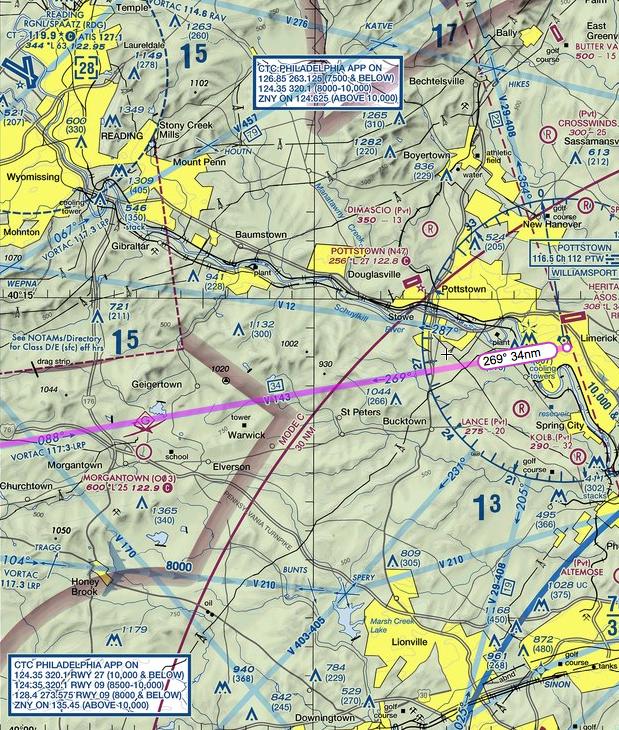 You can also go to the Airport/Facility Directory (A/FD) as a tie-breaker (though you're probably less likely to pull the book out mid-air, and if you did you'd probably use the nearest airport like I described above).

The blue boxes are talking about the Philadelphia Class B airspace, so if we look at the entry for the Class B airport (Philadelphia International - KPHL) we'll get more details on which radio frequencies we should use:

There's one final way to figure out who you should talk to, and that's to call someone else and ask. If you're opening your flight plan with Flight Service over the radio they will usually sign off with "For flight following try Philadelphia Approach on 126.85" and the usual plea for PIREPS, and if they don't offer a frequency you can always ask them.

In addition to voretaq7's excellent answer on how to figure out whom to contact in the air, it should be pointed out that if you're taking off from a towered airport, it is better to request FF from Clearance Delivery (or Ground, if they don't have CD) prior to taxi. They'll give you your squawk code plus the frequency (Departure, Approach or Center, depending) to use when Tower hands you off, so you can have it ready on the radio instead of fumbling with charts and knobs in the air. Once you're in the system, ATC generally won't drop you, whereas they might decide they're too busy for a cold call in the air.

Not the answer you're looking for? Browse other questions tagged faa-regulations air-traffic-control visual-flight-rules or ask your own question.

24
Why fly VFR at all?
1
Can ATC provide VFR flight following to a VFR aircraft in class E airspace?