How to determine climb performance for various flight speeds?

I have the following climb performance chart: 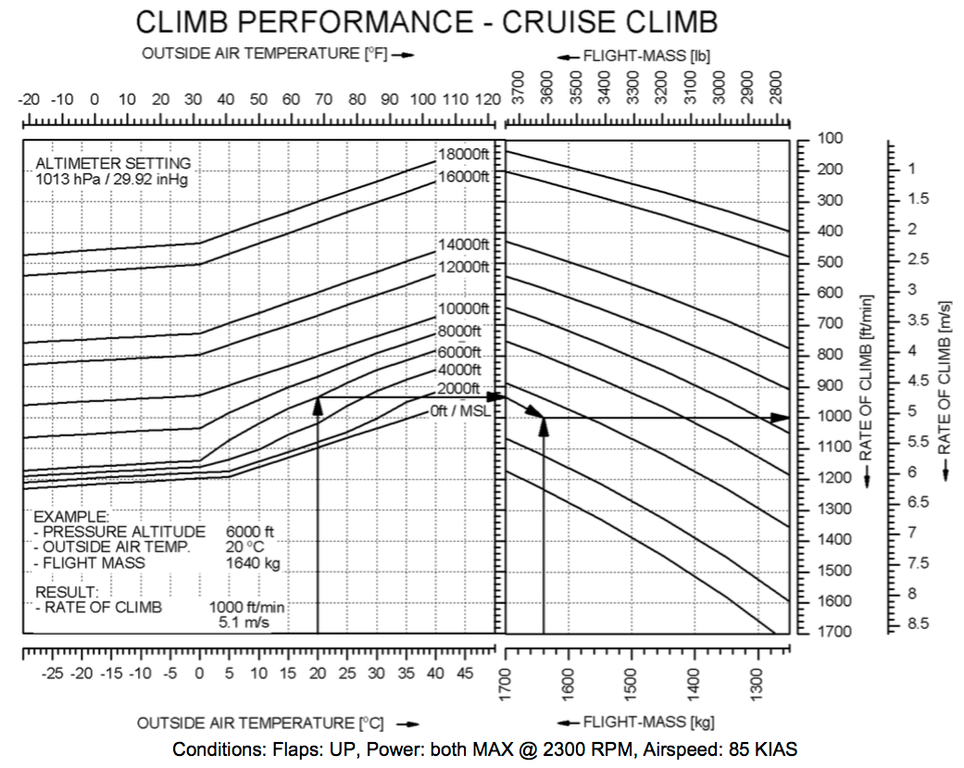 edit: The zero-lift drag coefficient and aspect ratio of the aircraft are given. And it is not important if it is an optimum climb or not, I simply need to predict the maximum achievable rate of climb, given flight speed, altitude and aircraft mass.

Aircraft performance charts all work the same way. Unfortunately, this one only gives the climb speed at 85 knots indicated airspeed (KIAS).

To find the climb speed at different speeds needs more knowledge about the airframe. Then you can apply a simple approximation following this procedure.

The chart does not tell where on the polar the aircraft is. Will it climb better when flying faster or not? This is impossible to tell. Since you have only one speed and one power setting, but a range of masses, the aircraft will not be at its optimum climb setting for most points. We can make an assumption and declare the reference mass of 1700 kg as the point where the cited conditions are at the optimum. But then I would need at least the zero-lift drag and the aspect ratio to make further assumptions.

From the previous answer we take the climb speed equation $$v_z = \frac{v}{C}\cdot sin\gamma = \frac{v}{C}\cdot\frac{T-D}{m\cdot g}$$ and set the correction factor C = 1 for now. The resulting error is small at low speeds. Now we need drag and thrust.

with $v_{ref}$ = 43.7278 m/s, which is 85 kts in sane units. The first two terms in the bracket look familiar: They are the drag contribution. The third term accounts for the climb speed of 5.5 m/s at the reference point in sea level altitude, so this accounts for the change in potential energy. If you need the thrust at higher altitudes, please correct $v_{ref}$ with the square root of the density ratio.

19
What dictates the aspect ratio of an aircraft's wing?
7
How can I calculate maximum rate of climb?
8
What are the meanings of various reference lines and sections in a take-off distance graph?

14
Why would maximum fly-time (endurance) not coincide with max L/D operating point?
10
About climb: If we use T/W as input, the second grade equation yields two solutions for W/S. Are both solutions realistic?
3
How to calculate the airspeed for maximum specific range?
13
Does a headwind affect the climb gradient?
0
What would the altitude profile for a typical airline flight look like?
1
How do I determine the engine thrust required to give a specific climb rate?
0
How to calculate the induced drag coefficient?
1
Do aircraft performance figures include corrections for areas with especially strong or weak gravity?