Why do large aircraft have their engines mostly on the wings, while smaller ones tend to have them in the tail or the tip?

Large passenger planes almost always have their engines hanging from the wings, Fighters usually have them in the rear, and small Cessnas have them on the nose.

What is the reason for these variations in design?

Small aircraft need very low mounted wings to allow for a decent cabin height. The last commercial airliner which required the passengers to climb over the wing spar on their way to their seat was the Boeing P-247. Low wings do not allow the necessary space for engines, so the next best location is on the rear fuselage. Also, small aircraft have a relatively short fuselage, and the gear can be made short (and light) without risking a tail strike on rotation.

Fighters need to have small moments of inertia, especially in roll, so they cannot afford to put engines on the wings. Even the Me-262 was initially planned with fuselage-mounted engines, that's why it had this peculiar triangular fuselage cross section. Only when the engines grew in diameter during development they had to be placed on the wing.

This picture of a Cessna Citation X should illustrate the point nicely. 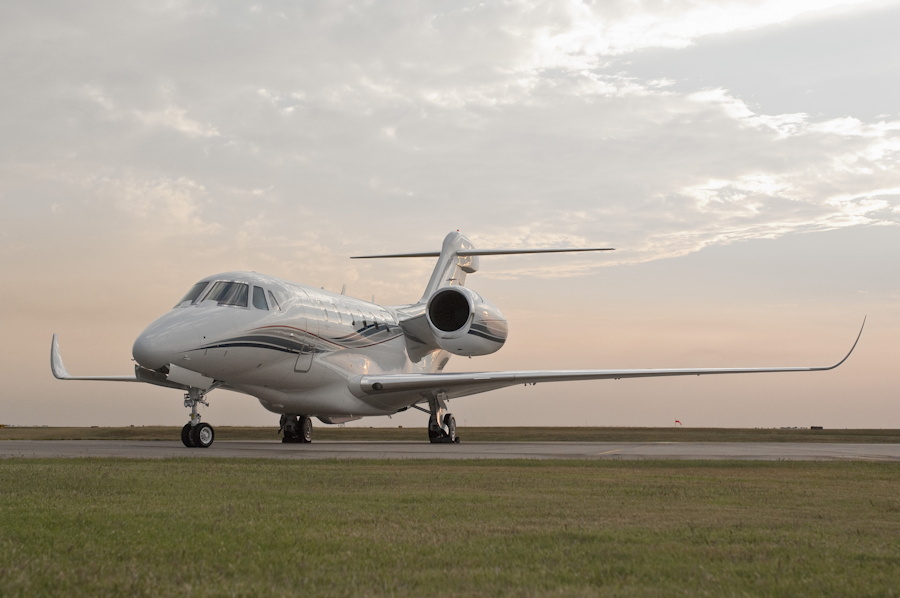 When designing an aircraft one basic factor is the thrust needed. In order to meet the requirements in power one or more engines are used. Factors that affect the selection are overall engine size, performance, efficiency, cost, material and thermal limitations during operation conditions like take-off, max continuous, max climb and max cruise. The installation has to be made with the lowest possible weight, drag and cost.

The positioning is indicated by aerodynamic factors such as drag, aircraft performance and manoeuvrability -pitching moments change around the center of gravity- and airflow through the engine, structural and purely functional/safety like debris injection inside the engine during landing or takeoff. All the above is just to give you a small taste of how the procedure goes.

In general, selecting the correct engine or combination of engines and the optimal positioning is a quite complicated and sometimes very tedious process.

However simply put, the amount of thrust -taking into consideration the minimum and maximum required for certification, performance etc- is split among the engines. Now let's address each type of aircraft in your question individually and try to make the logic behind the positioning:

Fighters:
These don't have the engines in the rear (e.g. they don't have pusher props), usually the jets are either underneath the fuselage like the Eurofighter Typhoon, incorporated to the fuselage, or the cockpit sits ontop of the jet nacelle like the Corsair II while in all cases the output nozzle is at the rear. The reasoning behind this positioning is the need for power and high speed. Apart that the fuselage is the only place where the engines won't hinder the mounting of missiles and other ammunition on the wings where they can be placed, inspected and replaced on demand and with ease.

Large passenger jets (like the Boeing 747):
The main characteristic of this type is that the space in the fuselage is needed for the passengers' accomodation. This alone rules out the incorporation of the engine in the fuselage as was the case in the fighters. The total weight increases leading to a need in power. The latter dictates either a very large single engine or more smaller ones -which is usually the case- that have to be distributed around the body which makes it logical to be put under the wings.

Medium/Small passenger jets (like the Cessna Citation Mustang or Dassault Falcon 900):
When the aircraft becomes smaller and the clearence of the wings from the ground becomes smaller the engines cannot be mounted under the wings without practical problems. So the engines move towards the tail where the fuselage needs to be reinforced to support the additional weight. The overall performance of the aircraft is different than that of a wing-mounted-engine aircraft because the cg is moved aft when it is empty.

Small Cessnas and others have a single engine in the nose because, as by now should be obvious, they need the power that can be provided by that single engine and for reasons of symmetry and construction costs.

All the above is a brief attempt to demonstrate the general thought process behind the positioning of the engines. Each way has it's pros and cons that every engineer takes into consideration and although these are the general configurations exceptions do exist. Some are this asymetric BV 141, or this DC-10 that has both wing and rear mounted engines.

Airplanes with tail engines behave the other way around: during acceleration they produce a nose-down moment around their lateral axis. This in turn causes more drag and eventually more money. During deceleration, the nose-up moment can be dangerous, considering a near stall situation or slow flight in general.

Mostly because of the number of engines. If you have more than one engine then it gets hard to put both in the middle. It can be done, there are fighters with two engines in the middle, but it makes more sense (less noise, easier maintenance, etc) to put them in the wings.

There's also a weight advantage. The wings lift the plane, the engines are a major weight component of the aircraft. So if the weight is where the lift is being produced you don't need to reinforce the structure to carry the forces around. Hence lighter structure.

If you have one engine, it pretty much has to be on the centerline. Otherwise, you'd have asymmetric thrust and you'd have to deflect the rudder, all the time, to maintain straight flight. This causes drag. Put it on the front, in a "tractor" configuration. Or on the back, in a "pusher" configuration. Or on top (see Lake Buchaneer/Renegade). Either way, put it on the centerline of the aircraft.

If you have two or three engines, you usually want those as close to the centerline as possible. In the event that one of the engines shuts down (intentionally or otherwise), you want the remaining thrust to be as close to symmetric as possible, for the above reason. Bill Lear was fond of saying that, in a twin-engine aircraft, each engine was just powerful enough to get you to the scene of the crash. Meaning that, for many twin-engine aircraft, if you lost one engine, the other engine could keep you airborne until you could no longer counter the asymmetric thrust and you lost control and crashed. This why Lear Jets all have fuselage mounted engines (as close to the centerline as possible) and the last airplane he was developing (the Lear Fan) had twin turboprop engines driving only one prop. If you lost one of the engines in THAT bird, you had less power but your thrust was still perfectly symmetric.

There are aircraft which have > 3 engines, mounted close to the fuselage. The Lockheed JetStar comes to mind, as does the Comet. Unfortunately, putting multiple jet engines next to each other causes problems with the airflow around the air intakes, which can reduce the efficiency of the engines.

In the meantime, you also have the issue of weight. Aircraft are designed so that the center of gravity (or center of mass, if you prefer) is on the wings because that's where the lift is. One of the heaviest things a modern jetliner is carrying is ... fuel. Not surprisingly, many of them have most of their fuel storage in their wings. Another of the heaviest things they're carrying is ... the engines. If you put the engines on the wings you have to have a significant-sized fin and rudder to keep it straight in an engine-out situation, but the forward-aft weight balance works out nicely. Putting all that weight on the wings also means that the rest of the fuselage is bearing less of a load, which means the structure can be, relatively, lighter.

So, for large jetliners with massive high-bypass turbofans, you want the intakes spaced out as much as possible, for maximum efficiency, and you want them close to the wings so that much of the weight and the lift are easily connected. Of course, being able to use gravity to drain fuel down, from the wings into the engines, also means the engines are more likely to get fuel if there's an electrical problems (which could shut down the fuel boost pumps).

1
What factors lead to mounting engines towards the rear of aircraft
1
Why were 'business jet' airliner designs so popular in the past?
17
Why are modern regional jet designs shifting towards under wing engines?
6
Why hasn't there ever been a large 4-engine commercial airplane with 2 engines on the wings and 2 engines at the tail?
5
What are the advantages and disadvantages of have the wing positioned further aft on an airplane?
4
Why is the wing of large commercial jet aircraft usually located below the fuselage?

7
Why do forward-swept winged fighters have the main wings in the back?
16
Have we seen the last significant experiments in the configuration of jet airliners?
6
Why hasn't there ever been a large 4-engine commercial airplane with 2 engines on the wings and 2 engines at the tail?
12
Can a supersonic plane use a subsonic wing if the nosecone shock produces subsonic airflow around the wing?
5
Why do BWB designs typically put the engines in the rear?
8
What is the largest aircraft (by max takeoff weight) in which all engines are in the tail?
29
Why do most airliners have underwing engines, while business jets have rear-mounted engines?
12
Why wasn't the 737 MAX's landing gear lengthened enough to mount the engines under the wings, rather than in front of them?
14
Why do modern aircraft tend to have angular tails?