Is there an aerofoil that gives reasonably good lift for both air flow directions: forward and backward?

Could an aerofoil be designed to give reasonably good lift for both flow directions?

I was motivated by this related question on Aviation SE: Can a plane fly backward if its propeller is in reverse?

It seems that in practice most wings are indeed optimized for one direction of travel. And that makes sense in the context of the use case they are designed for.

But hypothetically, had a designer to design a wing profile for an aircraft that wanted to be able to fly both ways could it be done? The means of flow reversal could be varied e.g. reversible pitch propellers etc.

Any examples of such profiles?

Why Would You Want To Do This?

I don't have a good answer here. Maybe just curiosity.

More speculation: It could give a fighter or acrobatic aircraft some special manouveres? The ability to reverse without stalling at the end of a steep climb etc.?

What about an aerofoil that's primarily optimized for forward flow but still has sufficient lift to not perform abyssmally in reverse? i.e. Not strictly symmetric performance. With good lift to drag ratios in forward flight but somewhat draggy in reverse. Say, a use case where 99% of the flight time is in forward motion but for the other 1% you don't want absolute crap lift in reverse motion.

Perhaps this flexibility can bring out more creativity in the designs?

There is no airfoil with good lift in both flow directions, but one with some lift is conceivable. However, the lift-to-drag ratio will be nothing to write home about.

One reasonable candidate would be created if we use the forward half of the venerable NACA 66(2)-415 and copy it again for the last half. Like that:

As you might recognize from the plot, this was done with XFOIL. However, the iteration does not converge. But when real air hits this thing, it will create lift, much like a cambered plate will do. Its inviscid zero angle lift coefficient is already 0.5, however, viscous effects will reduce this lift coefficient.

In a good airfoil, the pointed trailing edge defines the point for flow separation, while the rounded nose leaves it to the flow to find a suitable stagnation point. Here we have a rounded contour on both ends, so the separation point widens to a separation area, and this will creep up on the top side once the flow develops some suction at the top. Hence, lift will be poor and drag will be high.

With a little trick, XFOIL can be convinced that this is a regular airfoil with a really blunt trailing edge. Then this is the result at a Reynolds number of 5 million and Mach 0.3: 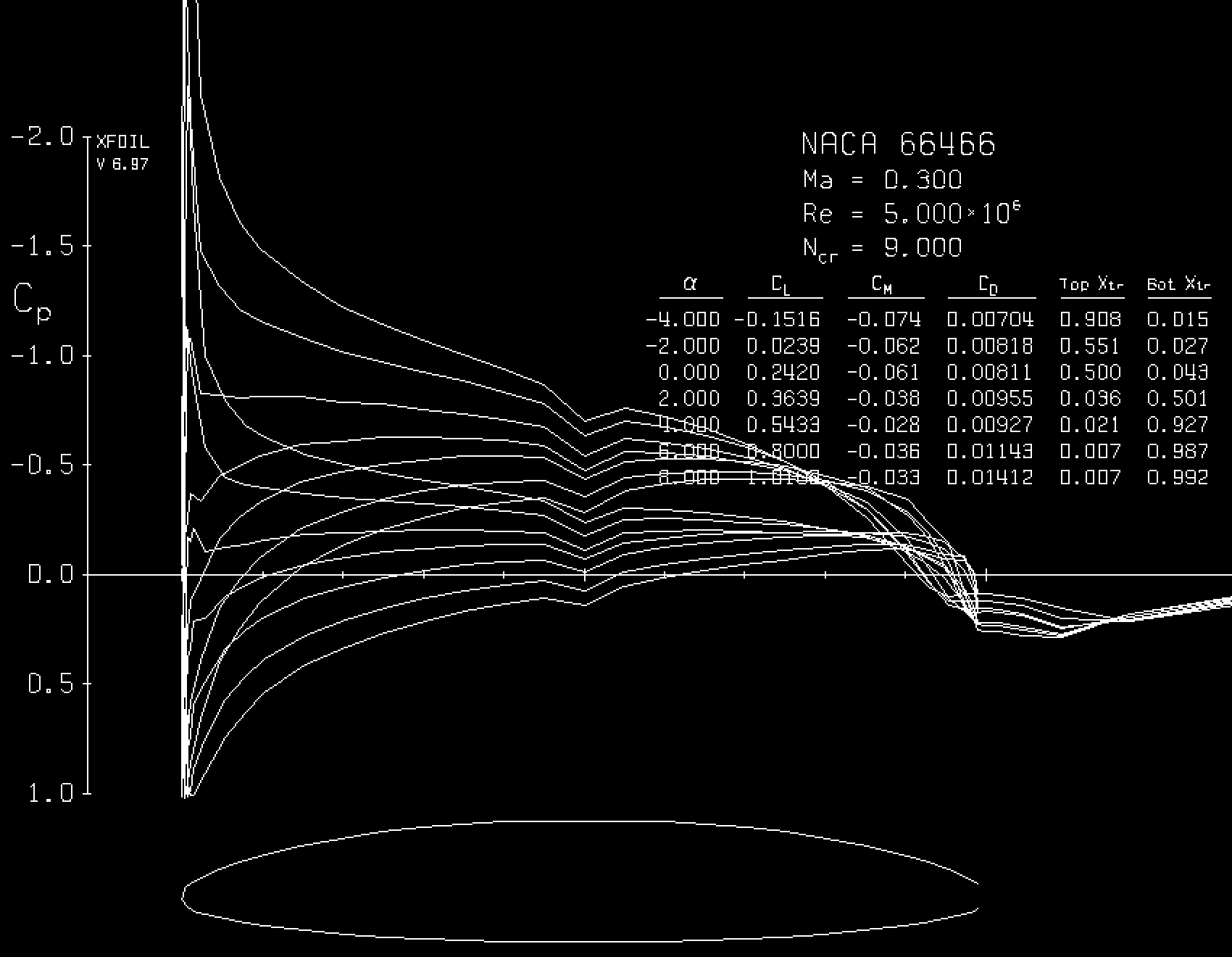 However, now the separation at the trailing edge is prescribed and will not as easily move up, so the results might be too positive. It seems that L/D exceeds 70 (which surprises me! The original 66(2)-415 has a lower L/D at the same flow conditions, which is a strong hint that we are misusing XFOIL here). Compare that to a good glider airfoil L/D of over 200 at this Reynolds and Mach number.

I cannot think of a good reason to do this. The consequences of flying backwards include: 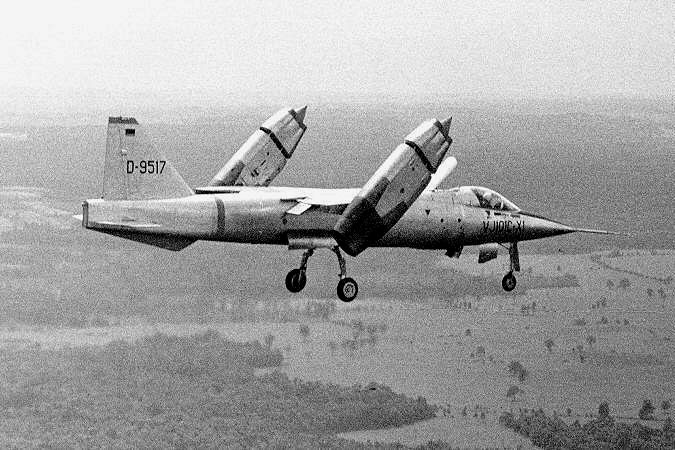 EDIT: @Marius mentioned in a comment below the S-72 X-Wing, an attempt to make a helicopter go faster by stopping the rotor above a certain forward speed. The X-Wing actually used an elliptical airfoil and forced the Kutta condition by directed blowing. This enabled it also to use a rigid wing and to adjust blade lift for cyclic and collective control by blowing. This is indeed the only sensible application of an airfoil that works in both directions.

ANOTHER EDIT: I just found this on Airfoiltools.com: The Sikorsky DBLN-526 double ended rotorcraft airfoil. It was most likely used on the S-72, and its 26% would only work with directed blowing, anyway.

Walter Morrison answered this question in the 30s, and found a practical use for it also.

We know it as a flying saucer, or Frisbee.

I don't think there was any concept of flying in the reverse direction, but the Lockheed F-104 had a symmetrical wing. It was a biconvex shape with a 3.36% thickness ratio. It had both leading edge slats and trailing edge flaps. Low speed performance was still less than ideal, but it worked great at Mach 2+.

Yes it can be done - in fact all airfoils have lift capability outside of the normal stall range. The situation of reverse flow can occur in helicopters that travel too fast so that the inboard bit of the retreating blade has reverse flow. 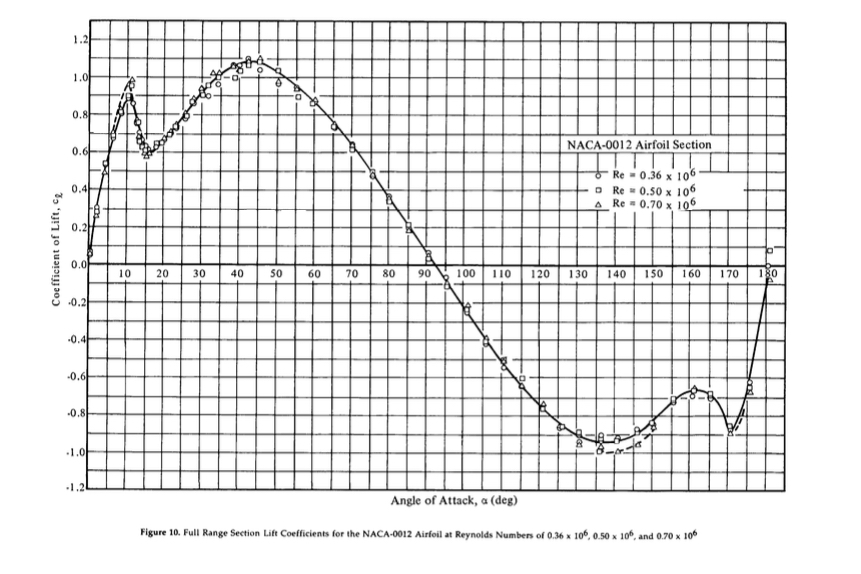 You can see that the lift coefficient at 180 deg is pretty similar to that at zero deg.

One place where a reversible aerofoil is used is on the daggerboard of Proas - boats that can be sailed in either direction. They have fixed windward and leeward sides, rather that forward and aft ends, so the foil is always required to generate lift in the same direction, but the flow is reversed.

Their shape is very like that in Peter Kämpf's answer.

The upper wing of Herrick's 'Vertaplane' had a fully symmetrical airfoil where the leading and trailing edges were interchangeable. Of course, that plane didn't fly backwards, but the upper wing could be turned 180º and worked equally well... https://airandspace.si.edu/collection-objects/herrick-hv-2a-vertaplane

Either of the wings in the diagram will produce lift in both directions. The one on the right is the shape of a boomerang wing, so it works, but there would be less loss if the air at the tip is separated both up & down.

Somewhere on the rcgroups.com website I once saw a post describing where someone took the wing of an rc model airplane and flipped it around so that the trailing edge was in front and attached it to the fuselage with rubber bands. Flight was possible.

0
Airfoils designed for reverse flow
0
In air return flight?
41
Why was the boat mounted this way on the underside of the wing on the "Landseaire" flying yacht?
26
Can a plane fly backward if its propeller is in reverse?
12
Is it possible to take off backwards using reverse thrust?
17
How do disks generate lift?
10
How would an airfoil react if it was flown backwards?
0
Does the direction of rotation of the propeller affect the direction of the thrust generated?
1
Has anyone built an aircraft with a flat ring wing?

2
Why is the centre of pressure for a real wing with low aspect ratio more forward than that in two-dimensional flow?
5
How changes in Air masses, Air flow direction and intensity affect lift?
2
Is there any plane that has wing of both aerodynamic and geometric twist?