Do runways always handle traffic in the same direction? Another question asked how runways were labelled left and right (8L and 8R, for example). But of course "left" and "right" depend on your perspective. If you were approaching from the opposite direction, then left would be right and vice versa.

Does this mean that runways only handle traffic coming from the same direction all of the time? Are there no ambidextrous runways that flip depending on the prevailing winds or whims of ATC?

As noted in the linked question to the question you linked to (this one), runways are almost always bidirectional. In your example, the other runway would be simply numbered 18 higher or lower, for 180 degrees off. Thus, the runways would be 26R and 26L - the "L" and "R" would swap, because you are pointed at them the opposite way. You can see this in the diagram of LAX below (src): 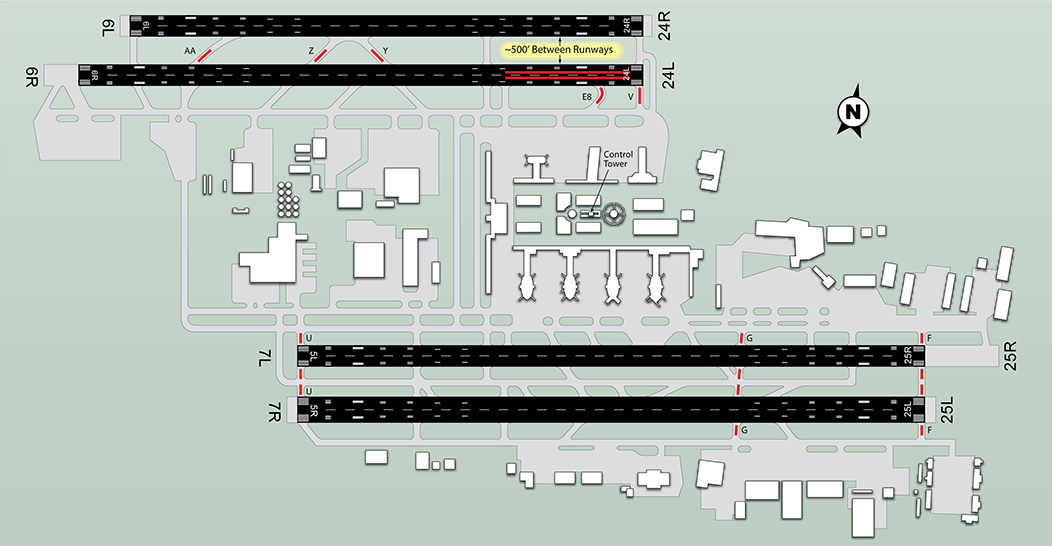 Yes, generally they flip based on prevailing winds, though I can't imagine they flip based on the "whims" of ATC often. Most airports will have a "calm wind runway", which is the preferred runway for operations in calm or near-calm winds.

Due to terrain or similar factors, some runways may be only usable one direction, but both directions will still be numbered, as you will takeoff and land pointing different directions (for example, Lukla airport in Nepal). Alternatively, as Jan Hudec noted, some will operate one-way, such as TNCM, though again, both runways are numbered. Occasionally, the opposite direction is not numbered, though this is rare.

Not the answer you're looking for? Browse other questions tagged air-traffic-control runways or ask your own question.

52
How are runways numbered?
23
What determines in which direction a runway is used?
14
Why do pilots say "clear of the active" at non-towered airports?
8
More than one runway with the same heading. How are they labelled?

11
How would ATC try to establish contact with a VFR craft?
16
Are there runways that are numbered only on one side?
8
Why do ATC instructions to change level include the words "climb" or "descend"?
7
How to verify the runway numbers in a systematic way given the high workload during landing?
10
Why didn't planes land from the sea in the old Kai Tak Hong Kong airport?
4
How are arriving aircraft assigned to runways?
8
Reasons for significantly lower than normal approach
8
What are the pros and cons of practising figure-eight landings on perpendicular runways?
1
Why can some runways only be used from one end?
3
Why would different crossing runways at one airport be on different radio frequencies?