More than one runway with the same heading. How are they labelled? [duplicate]

Given that runways are labelled by magnetic heading. What happens in airports that have more than one in the same direction?

How are they labelled?

Are there any such airports?

See here for the airfield chart.

You can see the numbers close to the end of the runways.

Here's an example for an airfield with a 34 left runway. 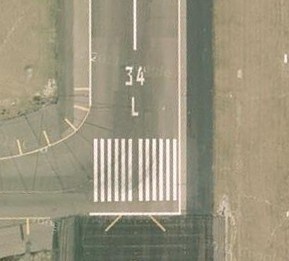 From the Wikipedia article on runway numbering:

At large airports with four or more parallel runways (for example, at Los Angeles, Detroit Metropolitan Wayne County, Hartsfield-Jackson Atlanta, Denver, Dallas-Fort Worth and Orlando) some runway identifiers are shifted by 10 degrees to avoid the ambiguity that would result with more than three parallel runways.

For example, in Los Angeles, this system results in runways 6L, 6R, 7L, and 7R, even though all four runways are actually parallel (approximately 69 degrees). At Dallas/Fort Worth International Airport, there are five parallel runways, named 17L, 17C, 17R, 18L, and 18R, all oriented at a heading of 175.4 degrees.

Occasionally, an airport with only 3 parallel runways may use different runway identifiers, for example when a third parallel runway was opened at Phoenix Sky Harbor International Airport in 2000 to the south of existing 8R/26L, rather than confusingly becoming the "new" 8R/26L it was instead designated 7R/25L, with the former 8R/26L becoming 7L/25R and 8L/26R becoming 8/26.

52
How are runways numbered?
2
How are parallel runways named if there are more than 2 or 3?
3
Are runways "one-way"?

25
How do airports determine when they should change their runway numbers?
14
How can the same runway have two different gradients?
7
How to verify the runway numbers in a systematic way given the high workload during landing?
8
Why are most runways laid out in a generally East-West direction?
29
Are grass strips more dangerous than tarmac?
28
Why do airports remove/realign runways?
21
Can two aircraft be allowed to stay on the same runway at the same time?
4
Are intersection takeoffs less common in the USA than in other countries?