Why is the DC10/MD11 center engine placed where it is?

I'm wondering if there is some advantage to that. Does placing the engine there create an appreciable pitch down moment? And how would that relate to the pitch up moment of the underwing engines? Are there any other aircraft that have this configuration?

There are a few ways the aircraft engines can be mounted on the centerline, each with its advantages and disadvantages.

One way is to mount them as in DC10, with engine above the fuselage; another one is to use a 'S' shaped inlet and put the engine at the aft of the fuselage like Dassault Falcon 7X.

The main advantage of mounting the engine as in DC10 is that the inlet distortion is minimized and there is no need to cut a hole through the fuselage for putting engine. The main disadvantages are that it increases drag (slightly) and engine maintenance is a mess.

Apparently,the DC10 engineers tried to put all three engines in the wing during design, but were not successful.

Engines mounted in high thrust line like DC10 and Piper PA47 are highly stabilizing as increase in engine thrust causes a pitch down motion as the thrust is increased. This is usually disconcerting to the pilots, who expect the aircraft to pitch up while engine power is increased.

Finally they ended up adding design changes to correct this in PA47 (to make it pitch neutral).

In DC10, a combination of underwing and high thrust line engines would've most probably caused no pitch changes at all. So I guess the main advantage is reducing inlet distortion.

As MD11 was developed from DC10, it simply inherited this design.

Note: As for the pitch down moment being disconcerting to the pilots, it is better if someone corroborates it. It is simply that most aircraft don't do this.

Are there any other aircraft that have this configuration?

For a similar engine configuration, see the Britten-Norman Trislander, a development of their successful twin Islander. 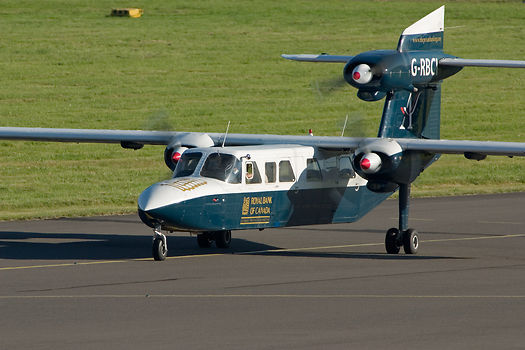 Generally, this configuration is unusual. It was driven by the desire to use existing engines on aircraft which grew too large to work with only two engines. Only one other airliner used this layout, the Lockheed Tristar.

Technically, the different location of the engines allows to control pitch with thrust input only. However, the slow response of turbofans makes them unsuitable for maneuvering; only trim support is realistically achievable.

Not the answer you're looking for? Browse other questions tagged aircraft-design dc-10 md-11 or ask your own question.

18
Why is the nacelle outlet of the tail engine of the L-1011 Tristar lower than the engine itself?
10
Why do trijets (3 rear engines) usually have a T-tail instead of a normal tail?
5
Is the MD-11's third engine slightly nose up?
2
What are the advantages/disadvantages of placing an engine in the tail?

6
Why hasn't there ever been a large 4-engine commercial airplane with 2 engines on the wings and 2 engines at the tail?
8
Is there anything wrong with this more symmetric aircraft design, and why isn't it used?
5
Where is the best center of gravity?
1
Where is the aerodynamic center for an A320?
7
Why would a stretch variant need a larger horizontal stabilizer?
5
Is the MD-11's third engine slightly nose up?
2
How could a 45 years old DC10 be still in service with one of the largest cargo airline?
3
Why are the boundary layer suction holes placed far forward from the engine?
29
Why is the most common hydraulic fluid so poisonous?