Delta 1889 was forced to make an emergency landing last Friday (August 7th, 2015) after being battered by hail in a severe thunderstorm.

The picture in the news shows the two leading segments of the windshield have been ruined and will need to be replaced. The nose cone of the jet has been caved in. Zooming in suggests that the sheet metal ruptured where it made contact with whatever it behind it. If that's the case I'm assuming it's too damaged to just have the dents pulled out and will also need to be replaced.

Beyond the obvious damage, what else will need to be looked at before the plane is able to resume normal operations? 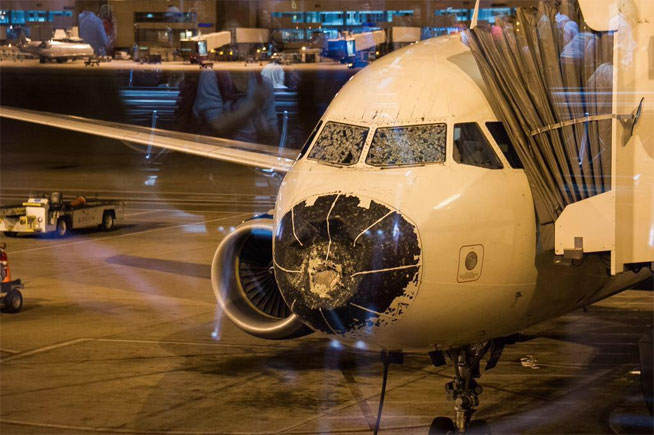 They would have to work from the nose back to ensure there was no other damage but the first thing they would look at is the nose its self. As mentioned that cone is not metal as it houses the aircrafts weather radar behind it. Specifically a Honeywell unit like this one. By the looks of it the element was damaged and most likely needs replacing. From there you would come to the forward pressure bulkhead which, considering the damage would need to be closely inspected. Here is a pic of one from a Boeing for reference. 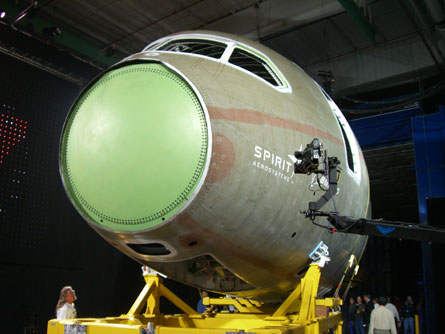 Degraded or improperly fixed bulkheads have lead to issues in the past. While this is happening they will also work on the windshield and check the struts around it for damage. They would also look over all forward facing surfaces, just a guess but they would check the wings leading edges for damage, engines, leading edges of the horizontal and vertical stabilizer as well as whole airframe for possible damage along its axis'. The question of will the plane ever fly again is more a question of cost than mechanical issues. For what its worth just about anything can be fixed, if and airline will fix it mainly depends on if its cheaper to fix or simply buy a new plane.

All forward-facing parts need to be inspected and replaced if they show signs of damage. This includes:

To get an aircraft certified for scheduled service after this kind of damage will take several weeks if done properly. It may be flown after a thorough check and quick fixes, not for passenger service, but to transfer it to a better location to repair the damage. You probably wouldn't believe what can be made flightworthy again with the right sort of sticky tape.

Not the answer you're looking for? Browse other questions tagged weather airbus-a320 aircraft-maintenance or ask your own question.

6
What are the consequences of hail damage to a small GA plane?