What are the different structural weight limitations that have to be considered when loading large aircraft?

What are the different structural weight limitations that have to be considered when loading large aircraft? Is there a difference in complexity as to whether it's a passenger aircraft or a freighter being loaded?

I think I know the answers, but it's precisely because I have to say "I think" rather than just "I know" that I'm asking the question. I'm hoping those here more technically oriented than I will be able to add to what I know.

Is there a difference in complexity as to whether it's a passenger aircraft or a freighter being loaded?

There are a lot of structural considerations for the semi-monocoque design used for all modern large aircraft. Using one variant of a 747-400F as an example, its Weight and Balance Control and Loading Manual runs to 584 pages. Items that need to be checked for each load include:

The manual snippet above covers the main deck; there are like tables for each cargo area. The linear loading is the lb/in measured along the longitudinal axis of the airplane. I don't really understand why it's necessary to check both the linear loading and the floor loading, given above as lb/sq ft.

Not only does the linear loading for each cargo compartment need to be checked, but the combined linear loading of all decks together along the longitudinal axis has separate linear limits as tabled below: 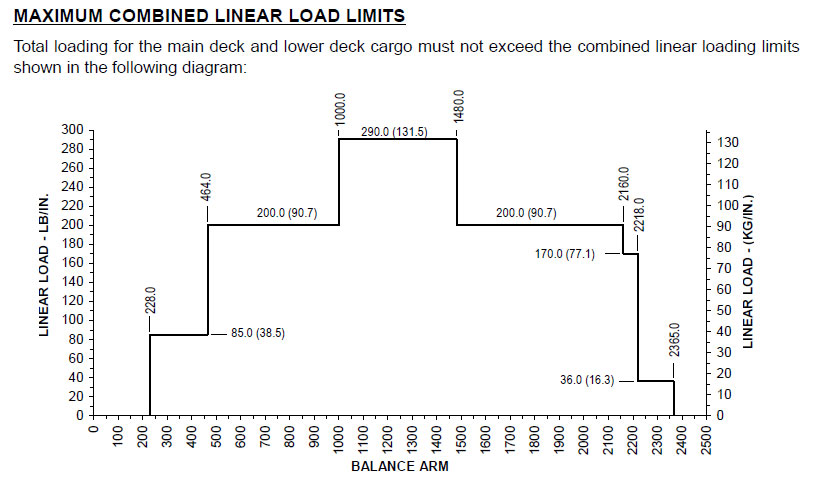 There are cumulative load limits for both the forward body and the aft body. Using the forward body for example, you add up individual items (more often than not ULDs) starting at the front and proceeding to a point over the wing box. I'm not sure exactly how that point is chosen insofar as structural and aerodynamic considerations are concerned. The aft body cumulative load starts from the tail and proceeds to the same point.

Below is a forward body cumulative limits graph. Note that there are two lines: one for use when the ZFW is 610,000 lbs or below, one from that weight up to 635,000 lbs. For this particular airplane, the aft body also has two lines, but the differentiation is based on the takeoff c.g.. Some 747s have only one line for each, some one line for one but two lines for the other. Obviously things can get tediously complex, and loadmasters and the software they're using has to accommodate all the possibilities. 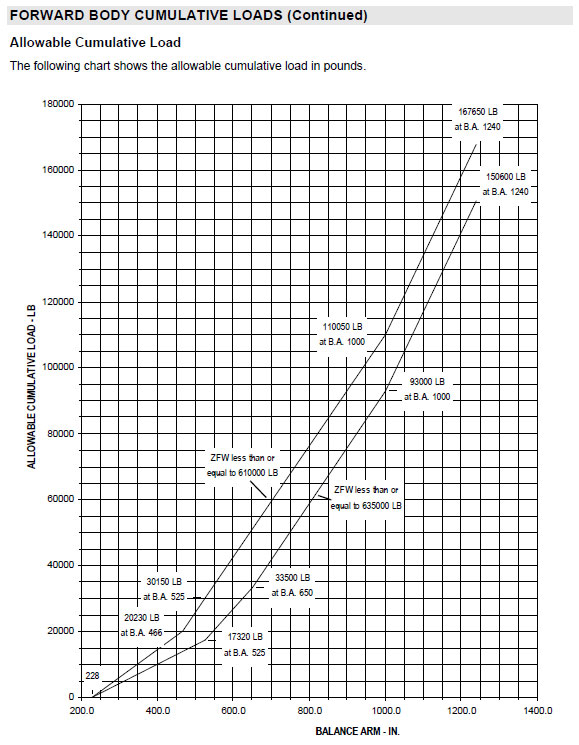 Widebody aircraft that can accommodate two rows of ULDs on the main deck have the option of carrying more weight in one container if the container laterally next it is given a lower limit. I know of one operator that didn't want to contend with the limit of, say, the position on the left being higher than the position on the right, and chose to forego the flexibility of unsymmetrical limits. An unsymmetrical limit graphs is below: 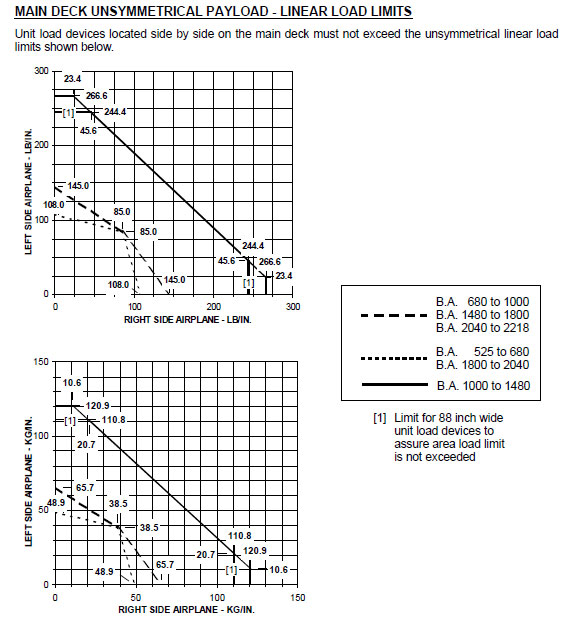 So, does anyone want to do a weight and balance for a large cargo aircraft? Fortunately we have software to do that for the great majority of loads that are containerized. However, loadmasters might still have to contend with unusual loads manually.

3
Are the implications of weight and balance for rotary wing aircraft similar to fixed wing aircraft?
18
What are different types of weights of an aircraft?
13
What alternative methods are there for controlling a plane when flight control surfaces have failed?
4
What is the weight that is used to balance an aircraft called?
7
What performance issues/symptoms can a pilot expect while taking off above MTOW?
8
What is the largest aircraft (by max takeoff weight) in which all engines are in the tail?
1
What are the empty weight and maximum takeoff weight of the Moller Skycar?