What keeps Russian airliners from being as fuel efficient as their Western counterparts?

Peter Kampf points out in his answer on IDing Tupolevs that the Russian transport aircraft designs tend to be quite aerodynamically refined, in some ways better than their Western counterparts on that front. What kept them from matching the West when it came to fuel efficiency then? Was it purely a matter of the Russian need to build sturdy aircraft to withstand their rough strips in the middle of Siberia? Or were there other factors, such as engine technology, in play? And have the Russians "caught up to us" regarding aircraft fuel economy, or are they still trying to get the hang of building fuel-sipping airplanes?

Russian engines were for decades behind the state of the art. One reason was manufacturing tolerances. I remember that we studied the Progress D-27 three-spool turboprop and found that just the cast casing could be made 250 kg lighter with Western tolerances. The Russian designers kept their tolerances wider to make sure that the minimum wall thickness would not be undercut.

Also, since Russian designers had less powerful computers available to them, they could rely less on CFD, so the turbo machinery was less refined. Improved engines explain maybe two thirds of the increase in fuel efficiency over the last 70 years.

Another reason is system redundancy. Russian engineers made sure the aircraft would still be operable after being maintained by a substandard maintenance crew. Especially the military designs were built with the goal of maintenance-free operation for several weeks. This thinking was also applied on the civilian side, since all Russian aircraft were designed with dual-use in mind. In case of war, all Aeroflot planes would become military transporters, and Aeroflot crews received most of their training on military aircraft. Why else would designs like the Tupolev Tu-134 have a glazed nose? 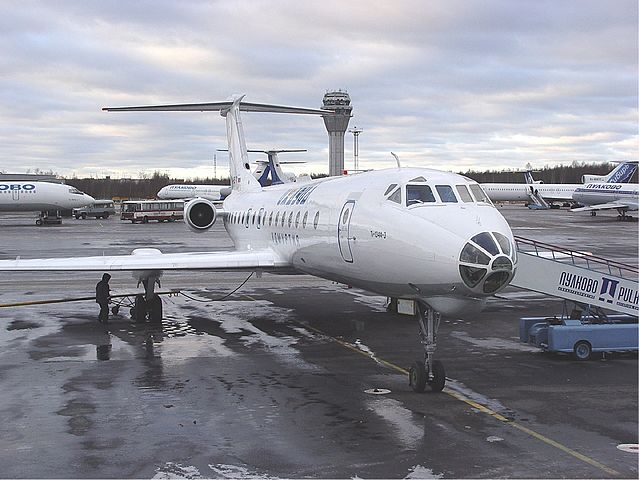 This is my own take on this interesting question. I've been reading about Soviet space and aviation realms for what seems like a lifetime. Here is the general knowledge I've accumulated:

The lion's share of resources went to the military, which meant they got the best aircraft engines. Factories are expensive, so they tended to use the same military engines on civil aircraft that optimally needed a different engine design.

Also, most "new" (post-WW2) military planes wanted turbojets for supersonic speed, whereas civil planes would benefit much more from turbofans (a pretty new concept at the time). So many jet airliners got turbojets too for several decades IIRC.

For most post-WW2 Soviet history, petrol was very cheap and so the economic incentive like we see today just didn't exist. This cheap petrol also existed in the US for a time, but the crunch came much earlier (1974 arab oil embargo IIRC, which didn't affect USSR. In fact, the raised oil prices actually benefited USSR selling their native petrol at higher prices). This eventually changed in the 80's IIRC (petrol in Baku drying up), by which time a whole contingent of other economic problems were stacking up and civil aviation just wasn't a priority.

Soviet aircraft place more emphasis on being able to takeoff from poor, dirt fields (for military reasons), which adds weight to the landing gear and maybe fuselage frame.

Soviet aircraft place more emphasis on cold-weather durability, which includes not just lower extremes in the envelope, but also just the general operation in temperatures which are on average colder than in US. This adds weight to engines and other parts (I believe hydraulics? plus any moving exterior joints?).

WW2 completely destroyed the Soviet economy. This is sort of going beyond "the reason is poor engines" and giving a reason for the reason, but it is relevant. The exact opposite happened in America, where WW2 was economically a boon that completely reversed the Great Depression.

It seems like there are some more but I can't think of them. Will edit later if necessary.

Every aircraft manufacturer has their philosophy in designing the aircraft, depending on their experiences (regulatory conditions, economy, availability of materials etc.) The Russians are the largest producers of crude oil and have no incentive to produce fuel efficient aircraft.

Though the Russian aircrafts are aerodynamically equal to their western counterparts, their fuel gulping engines mean that they are as a whole, inefficient. This is because most of the fuel savings realized in aircraft are due to improvements in engine fuel consumption than due to aerodynamic improvements - 69% to 27% (Lee, J. J., Lukachko, S. P., Waitz, I. A., and Schafer, A. (2001). "Historical and future trends in aircraft performance, cost and emissions." Annual Review Energy Environment, 26, 167-200.).

Improving the fuel efficiency of the engines requires not just a lot of research in aerodynamics, but also in materials (as the efficiency directly depends on the turbine temperature) and new manufacturing techniques. The Russians most probably had decided that it is not worth the cost and effort.

However, this slowly changing as they try to export their aircraft to other countries in the world which demand better fuel efficiency. Still, they have a lot of catching up to do with their western counterparts.

42
What stops planes from being stolen?
4
Where do Russian and Chinese airliner manufacturers test their airliners?
18
What keeps certified GA aircraft from being affordable?
8
What prevents miltiary jets and turbo-props from being refitted with a turbofan?