What data did the earliest HUDs display (for fighter jets)?

Ideally I'm looking for a screenshot with a bullet list of data. I started my search at the obvious encyclopedic site and was surprised to learn that the earliest HUDs (on fighter jets) go all the way back to the 40's.

So what data did they display? Presumably it would be a limited set of data compared to today's standards, and I'm very interested in what was considered the most important data for a HUD. Especially, did they have that circular piper showing where your bullets would impact?

The Me 262 Schwalbe, introduced in 1944 as the world's first operational jet fighter aircraft, did not have a full-blown HUD. Instead, like many fighters of WWII, it had a reflector sight which used lenses and reflecting glass to display a reticle. This sort of thing [all of the bright yellow lines you see in the image are fixed together. Although you only really needed a dot and a circle (like the Spitfire), some pilots liked the extra lines to help line up targets that were not dead-ahead. They were favored by pilots over iron-sights because the pilot was not required to position his head in order to see where the guns would fire.

The MiG-21, introduced in 1959, used a combination of reflector sight and HUD. Though it didn't display the altitude, speed, heading, or attitude in a way that modern fighter pilots may take for granted, it had some ability to track targets with radar and to display predicted target positions for gun or missile use. Here is a guide on how to aim your guns using its sight. Also, explanations of the displays. The following image was posted on a forum thread related to the MiG-23, which came after the MiG-21, but this image looks much like those from the MiG-21 manual. A different image from another author shows you how simple the display could get. Finally, an F-16 in the sights of a MiG-21. You can tell this is a MiG because of the distinctive pitot tube.

The F-14 first flew in 1970. Its HUD was equipped with an artificial horizon, altitude, speed, heading, gun data, missile data, and much more. This is from the F/A-18, which first flew almost a decade later.

The earliest were reflector sights which were fitted to fighter aircraft at the end of WW I. The picture below shows an Oigee Reflexvisier from 1918, built at the Optische Anstalt Oigee factory in Berlin-Charlottenburg and used that year in Albatros, Fokker and Pfalz D-type aircraft. Two types were built and were the first, albeit very simple, head-up displays. 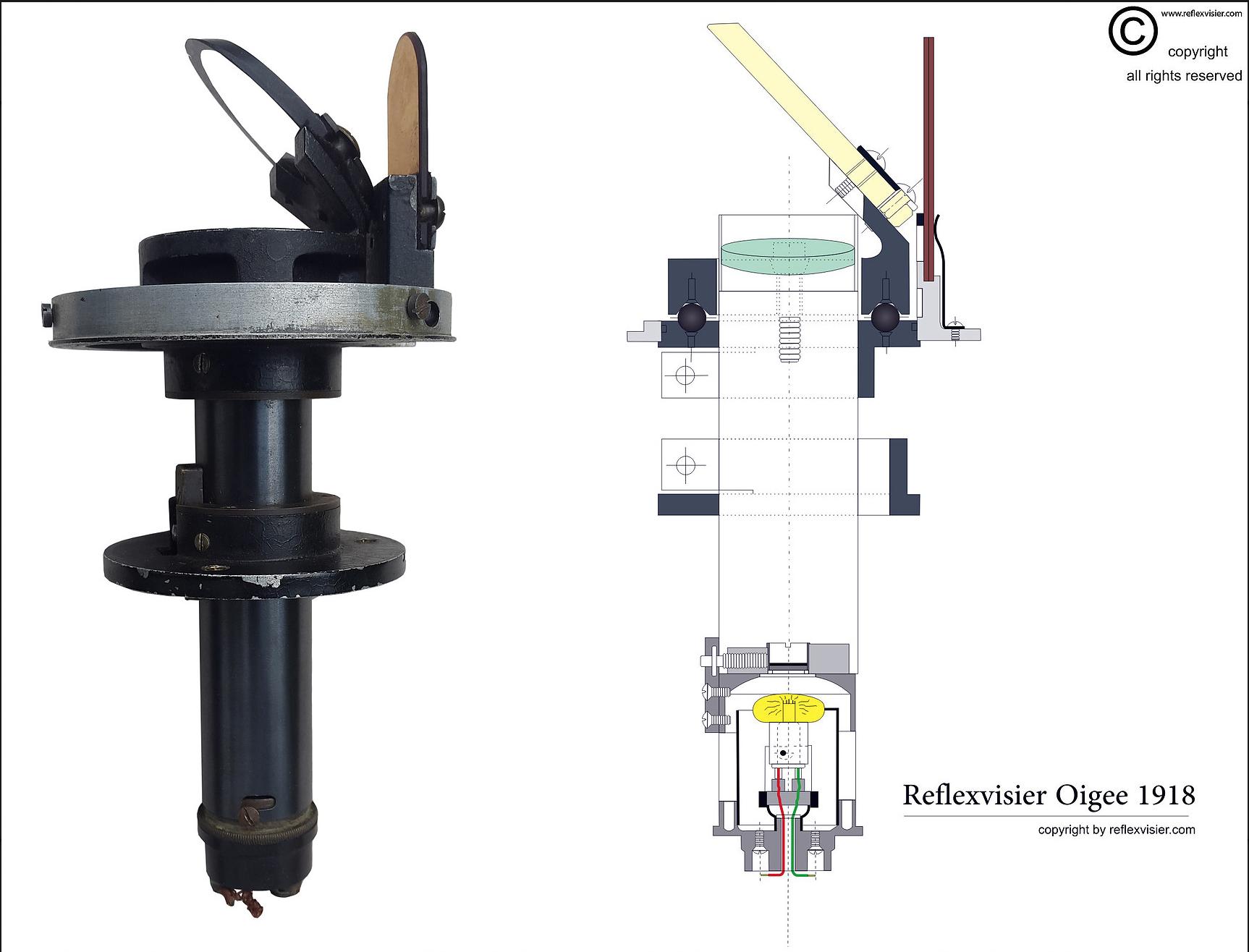 What was displayed was basically a single dot of light which was projected on the semi-transparent mirror such that it would overlay the point at which the fixed guns were aiming, regardless of the pilot's eye position. Only the height of the mirror needed to be adjusted for the sitting height of the pilot. The brown plate in the path of light was used for this adjustment and removed for operation.

As a development of the existing "reflector gunsight" (which as other answers note was intended to eliminate parallax error due to the pilot's head position), the "computing gunsight" used the motion of the aircraft it was mounted on to generate a modified gunsight indicating the lead required to shoot a moving target.

A ring was projected onto the reflector, such that holding the target steady in this ring would provide the correct lead. An estimate of the target's range first had to be set on the gunsight. In practice, this was often left at the convergence range of the guns, and the pilot would attempt to manoeuvre the target to that range.

The first production models were produced in Britain in 1941, and successfully used against the Luftwaffe. In 1942, a Thunderbolt with a computing gunsight was captured in Germany, which stimulated their efforts to develop similar technology.

In this early technology, no corresponding information about altitude, airspeed, heading or attitude were provided, being left to conventional instruments. The Sperry K-14 was considered notable for including both computing and fixed (ie. equivalent to a reflector sight) gunsights in the same unit.

10
Do fighter jets have forward-looking radar warnings for missiles, and when was this first implemented?
4
How were fighter jets built in the 1950's?
6
What was the first fighter jet that utilised thrust vectoring nozzles?
6
What are the advantages/disadvantages of in-fuselage engines (eg most fighter jets) vs wing/fuselage mounted engines?
3
What are the pros and cons of high service ceilings for fighter jets?
4
Why in the past were weather radars not used on fighter jets?