When flying a circling approach, is it permitted to begin the visual circling segment prior to the final approach fix?

If it were a beautiful sunny VFR day and you were cleared for a circling approach, can you begin the circle prior to the final approach fix/circling DH in order to maneuver visually to land?

Here are two examples of situations where it would be very useful, and both are real life clearances that I have gotten multiple times:

N1234, Cleared for the VOR/DME-C approach, cleared to land runway 15 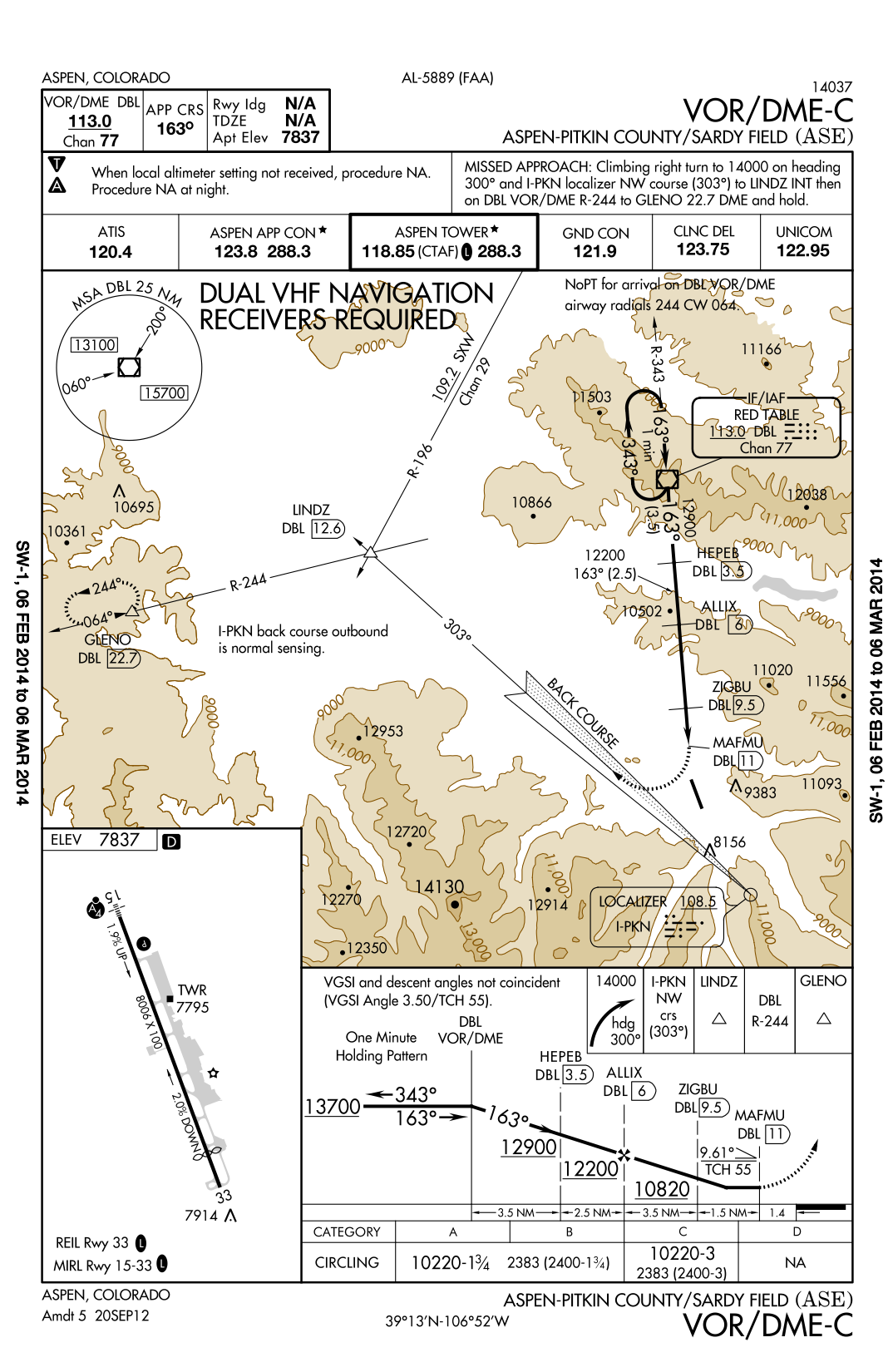 Could you begin the circle early and descend while visually avoiding any obstacles prior to the step-down fixes? Say cross ALLIX at 11,000 ft. and ZIGBU at 9,000 ft. (assuming that this cleared all obstacles)? Keep in mind that this is a circling approach so we will be operating below the MDA visually at some point on final anyway.

If not, then it would be nearly impossible to land straight-in while flying most jets, and yet I have never seen anyone do a 360 or a similar maneuver while on final here (and who would want to do that in the valley anyway??). 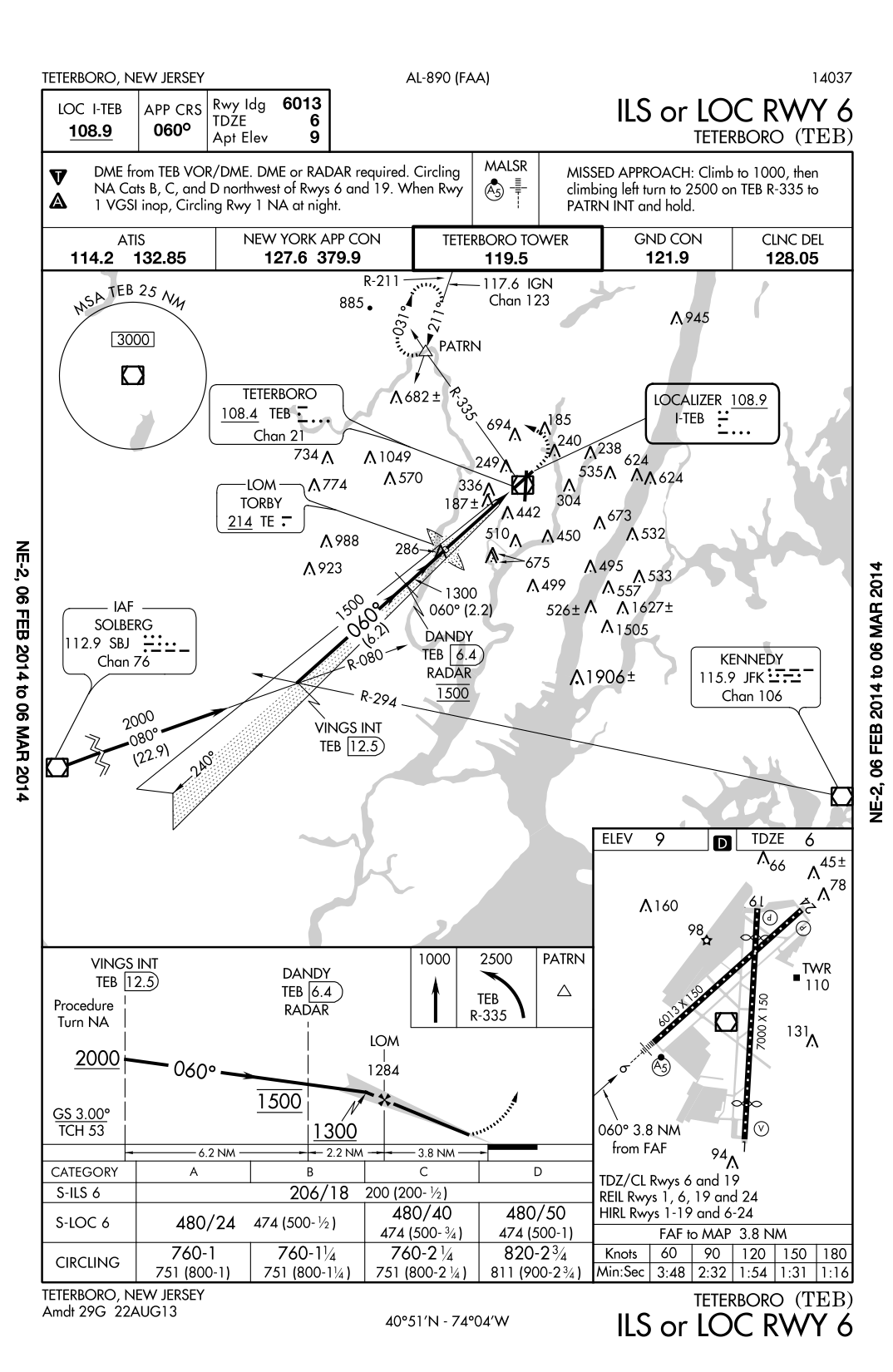 If I fly the ILS (localizer and glideslope) until reaching circling minimums, especially in a category C or D airplane and with this runway layout, it will take a lot of room to turn right for a base leg to runway 1 and then turn back left to intercept final and lose the required altitude.

Could you start the circle a little sooner by making the right turn early (prior to DH, but still within the protected circling area) in order to intercept the extended final for runway 1?

While researching this subject, I found a few things that shed light on the subject:

1. Clearances authorizing instrument approaches are issued on the basis that, if visual contact with the ground is made before the approach is completed, the entire approach procedure will be followed unless the pilot receives approval for a contact approach, is cleared for a visual approach, or cancels their IFR flight plan.

So we have to follow the entire approach, which includes all mandatory altitudes.

c. Straight-in Minimums are shown on the IAP when the final approach course is within 30 degrees of the runway alignment (15 degrees for GPS IAPs) and a normal descent can be made from the IFR altitude shown on the IAP to the runway surface. When either the normal rate of descent or the runway alignment factor of 30 degrees (15 degrees for GPS IAPs) is exceeded, a straight-in minimum is not published and a circling minimum applies. The fact that a straight-in minimum is not published does not preclude pilots from landing straight-in if they have the active runway in sight and have sufficient time to make a normal approach for landing. Under such conditions and when ATC has cleared them for landing on that runway, pilots are not expected to circle even though only circling minimums are published. If they desire to circle, they should advise ATC.

The key part for this discussion is that, for approaches that would be straight-in if it weren't for the high descent rate on final (like the KASE approach), pilots are not expected to circle even though only circling minimums are published. If they desire to circle, they should advise ATC.

Well, in this case we can't land straight-in after making the last crossing restriction, so what can we do?

Combining the two quoted passages, our options are:

The first three are pretty straight-forward and can be used if you pick up the airport visually in time.

If you need to circle, I found a great article called Circle-To-Land Tactics which was written by a former chairman of the ALPA TERPs committee. He suggests overflying the runway and then flying a modified pattern: 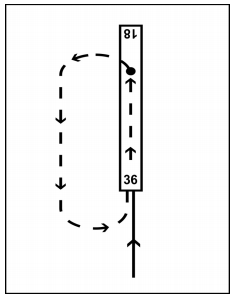 We can't start our circle until we are within the protected circling area. This means that for my category C airplane, I have to wait until 1.7 NM from the runway threshold before I can begin my turn.

We could make a right 90 degree turn followed by a left 90 degree turn to line up on final, but that would eat up about one mile just by turning. Since runway 1 is actually closer to us than 6 at this point, I have even less distance to work with and can't even see the runway during the first turn because we are banking the wrong direction. This would be pretty tight.

In this case, the previous article recommends a circle like this (which would be modified for our actual runway layout): 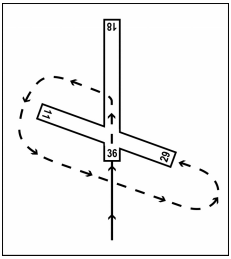 In good visual conditions, I would just ask for a visual approach so that we can start the turn a little sooner and land "more" straight-in without flying all over the airport.

One last point: Since there is a control tower at both of these airport, make sure that they know what we are going to do!

Well, some of the things you are talking about are not even permitted for a visual approach :-)

After initial visual contact, the basic assumption is that the runway environment should be kept in sight while at minimum descent altitude/height (MDA/H) for circling

The circling approach allows you to fly at/below the MDA around the airport while having (part of) the airport in sight AND while inside the circling approach area (~4.5 miles max for category E). It's not a license to disregard altitude restrictions while descending on the approach. It's also not a license to start flying around the class D airspace at will.

For KASE the highest category allowed for circling is C. The protected area (centered around the runway threshold) for category C is 1.7NM. You cannot begin your circling until 1.2 NM after ZIGBU.

Note that after ZIGBU you can descend to the circling MDA of 10220 and with the airport in sight you can continue to descend all the way to the rwy threshold any time you wish. How are you going to lose 3000' in 2.9 NM I have no idea. But I'm pretty sure a circle to land clearance does not allow you to break that "10820' or above" restriction.

You cannot legally descend below minimum altitudes. Going to 11,000' before Allix or 9000' before Zigbu is not allowed unless you cancel IFR or are cleared for a visual approach. Sometimes the stepdowns are used to keep you above traffic instead of obstacles. That's the case at Orlando International, for example, where the ILS approach from the north overflies the ILS approach from the east at Orlando Executive.

Not the answer you're looking for? Browse other questions tagged faa-regulations iaps non-precision-approach instrument-procedures terps or ask your own question.

4
Why and how would I land straight-in from a circle-to-land approach?
9
When should I start turning in this circling approach?

13
What is the procedure when being vectored for an approach and ATC allows you to pass through the final approach course?
13
Is it legal to fly the localizer approach when cleared for the ILS?
13
Are crossing restrictions on an ILS/LOC approach mandatory when flying on the glideslope?
10
Where is a missed approach point for circling while flying ILS?
12
Where does the final approach segment begin on an ILS approach?
12
Why are sidestep ILS minima not used in EASA-land? (specific example: EGKK)
15
Can I circle to a different runway if cleared for an instrument approach without circling minimums?
2
What are the specific side step minimums for an approach?
2
For KPDX LOC 21 approach, how is the procedure turn performed when entering from the east?