Tupolev used to be the one of the largest airliner manufacturer comparable to Boeing and Airbus. However since the dissolution of USSR, its airliner business is declining, and only operated by a few ex-USSR or communist countries' airway. Currently narrowbody Tu154, Tu204 and regional Jet Tu-334 are still active.

First, the Russian airplane industry is organized differently from its Western counterpart. While both have research organizations and aircraft manufacturers, in Russia and Ukraine design offices are between both. In Russia, TsAGI does most basic research and develops aerodynamic designs which are then put into fully developed aircraft by the design offices (Antonov in Ukraine, Ilyushin, Tupolev, Mikoyan (MiG), Sukhoi, Yakovlev or Beriev in Russia). The finished designs are then transferred to manufacturing plants like Aviakor in Samara which churn out the actual hardware. If the demand for Tupolevs goes down, Aviakor will switch to Antonovs or Ilyushins, so the fluctuation for products of a particular design office can be evened out.

One consequence of this arrangement is that aerodynamicists have the first say on the shape of the aircraft. Russian designs generally have more refined aerodynamics, at the cost of a higher manufacturing effort.

Older airliners from the Fifties and Sixties were designed with dual use in mind, and many of them had a glazed nose, which makes them easy to distinguish from their contemporaries from the West.

This design from the 1960s is similar to the Hawker-Siddeley Trident or the Boeing 727. Its production surpassed 1000 aircraft and ended only in 2013.

Intended to replace the Tu-154, this two-engined airliner flew first in 1989 and looks similar to a Boeing 757. It is still in production, but less than 100 have been produced.

The main differences from the Boeing 757 are:

The Tu-334 is a shortened Tu-204 with fuselage-mounted engines. Only two have been built, so the chances to spot it are remote. The new location of the engines allows it to use a very short landing gear, and the shortened fuselage gives it a rather stubby, unique appearance. 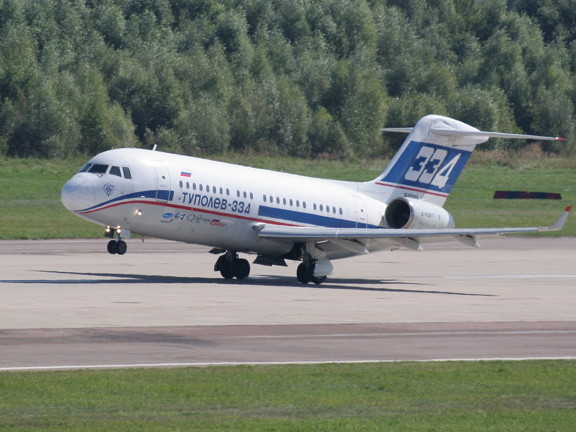 Tu-204 is perhaps the only slightly difficult one in your list. Short stubby nose and rather long engine cowlings. Mostly operated by non-western carriers.

Not the answer you're looking for? Browse other questions tagged airliner aircraft-identification tupolev or ask your own question.

12
What keeps Russian airliners from being as fuel efficient as their Western counterparts?
19
Why is it said that the Tupolev Tu-144 had superior aerodynamics to the Concorde?
14
What is the "area rule"?
11
Is the "glass nose" Tu-134 design for easier conversion to military use?

10
How are pushbacks coordinated between the pilot and the tug?
19
How can I tell the difference between Spitfires and Hurricanes in photos?
1
What are the names and the function of these aircraft components?
6
How and how often are the oxygen masks in the cabin checked?
5
Why is Bombardier selling off all of its airliner series?
4
Can anyone identify the plane in the image shown and/or year of service?