What are autothrust and manual thrust on an A320 (or other aircraft)?

The accident report on the A319 G-EUOE incident in May 2013 mentions "manual thrust", and implies that using it is very unusual.

The autothrust system failed, requiring the use of manual thrust:

The autothrust system cannot operate in N1 mode and so was unavailable for the remainder of the flight, which was flown using manual thrust

But the pilot hadn't used manual thrust outside a sim session for seven years (and the co-pilot had never used it outside the sim):

The commander informed the AAIB that, excluding simulator training, he had last flown the A320-series aircraft using manual thrust seven years before the accident

Manual thrust means that the engine thrust corresponds directly to the position of the thrust lever.

Autothrust means that a target speed is dialed into the system (using a knob that is usually located on the glare-shield) and the auto-thrust system automatically adjusts the engines to maintain that speed.

Now in an aircraft with classical controls the longitudinal stability means the aircraft tends to maintain speed with pitch and pilots basically need to use thrust to climb or descend and yoke to adjust speed, always making adjustments with the other control as well to avoid oscillations and compensate for the more complex parts of the power-pitch relationship.

Due to this, it is usually recommended to fly either fully manual or fully automatic (autopilot+autothrust).

But Airbus A320 and newer (A319 is just a variant of A320) changes that with the artificial neutral stability in normal control law. Even with autopilot off, the flight computer automatically adjusts trim so that the aircraft flies straight so that adding power makes the aircraft accelerate and reducing it makes it decelerate. However pushing the stick forward to descend will still make the aircraft accelerate and pulling it to climb will make it slow down.

Due to this, Aibrbus aircraft are easier to fly with autothrust always on (except for take-off roll; autothrust is disabled when the power levers are advanced above certain position, which is only done for take-off and in emergency where extra power is needed).

To add one piece of information to Jan's answer, quoting from the A320 Flight Crew Training Manual, a detailed description of what exactly is autothrust:

The A/THR computer (within the FG) interfaces directly with the engine computer, referred to as the FADEC. The A/THR sends to the FADEC the thrust targets that are needed to:

• Obtain and maintain a target speed, when in SPEED mode

The A/THR system provides cues that indicate the energy of the aircraft: 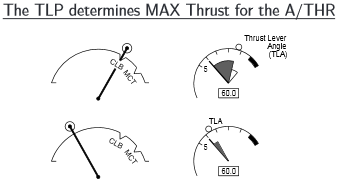 If thrust levers are set to IDLE, A/THR is set to off.

There is a direct relationship between aircraft pitch control, and engine thrust control. This relationship is designed to manage the aircraft’s energy.

• If no AP/FD pitch mode is engaged (i.e. AP is off and FD is off): A/THR controls speed

On the other hand, manual thrust is a conventional and proportional interpretation of the position of the TLP: 0% throttle at IDLE, 100% at TOGA and linearly interpolated inbetween.

As for why the A/THR is seldomly not used, from the same manual (emphasis mine):

Use of A/THR is recommended during the entire flight. It may be used in most failures cases, including:

• Engine failure, even during autoland 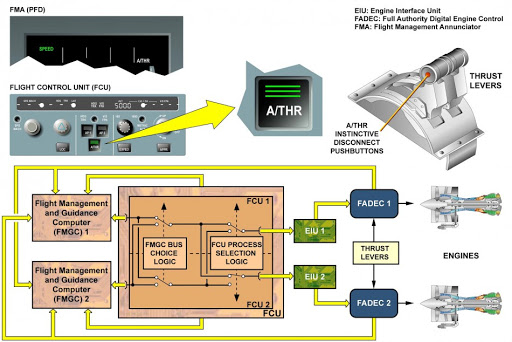 The pilots also have the option to turn off the autothrust and control the thrust of the engine by him or herself. This is called manual thrust. It is as simple as that. So, with manual thrust the pilot will control both the aircraft trajectory and the speed.

Is it unusual for an Airbus pilot to not use the autothrust? No, not all. I am an Airbus pilot and I use manual thrust occasionally to keep my manual flying skills up. Is it difficult? Again, no. With autothrust off it flies just like any other aircraft without an autothrust system. I have many hours as an airline pilot in an aircraft that had no autothrust. To be honest with you, at times I find it easier to land an Airbus with the autothrust off because it allows me to really feel the energy state of the aircraft. I do not know about other pilots but when I did my initial type rating on Airbus, the first three sessions were all done with mostly autothrust off. Interestingly, me and my training partner initially struggled with autothrust on landings, because it was weird for us not to have control of the thrust after many hours of flying the Dash 8.

There are some airlines that ban the usage of autothrust on landing. One of them is Lufthansa. My airline is more flexible regarding that. It is up to the pilot to decide to use it or not. Then there are airlines that says specifically not to turn the autothrust off. Still the pilots of those airlines will practice autothrust off landings during their 6 month recurrent trainings.

I am sorry but I cannot really comment on why the captain did not turned off the autothrust for almost 7 years. Airline policy or his preference? Not sure. But he was able to land the aircraft well. So, he had the ability to do it, when it was required.

Not the answer you're looking for? Browse other questions tagged engine-failure airbus-a320 or ask your own question.

3
What is Auto-thrust?
1
Can thrust be selected manually in a plane with autothrust? If yes, how?

5
A320 procedures for one thrust reverser inoperative; why is the old procedure more efficient?
8
How does the A320 FMGC (autothrust, autopilot) decide which radio altimeter readings to use?
3
Why are there different starter limitations for dry cranking and manual start on the A320?
3
What is the A320's procedure for dual engine failure at very low altitude?
0
What are the BUGS and RST buttons on the A320's ISIS for?
6
Why doesn’t the A320 have any provision for manual aileron trim?
2
Are aircraft certified for inflight thrust reversal required to demonstrate controllability in an asymmetric-reverse-thrust scenario?
2
What are the various thrust modes in the Airbus A320?
5
On the Airbus A320 family, when does the autothrust disconnect?
0
What are the A320 ECAM system displays' dimensions?