Do Cargo flights carry anyone other than the crew?

This question talks a bit about the crews that are involved in a commercial cargo flight, but I'm wondering if Cargo flights every carry other sorts of people on their flights? Say, a photographer to take pictures of operations for advertising or something. Or maybe one of the crews kids who want's to see what Mom does or something like that. Or, perhaps there's even another person who's normally there?

If they do, here's a couple bonus questions:

Yes, cargo aircraft are like other aircraft in that there is generally at least a jump seat available. Especially larger aircraft will also have additional jump seats, a lavatory, and a galley. This area can be used for relief crew, or other crew that are just deadheading.

There are exceptions though. The upper deck of the 747 is larger than just the cockpit, even on the cargo versions. There is more room in the back for additional crew. The An-124 and An-225 also have additional space for crew behind the cockpit. The extra crew can be loadmasters, navigators, mechanics, or other functions that can make it easier to operate in and out of airports with less services available. 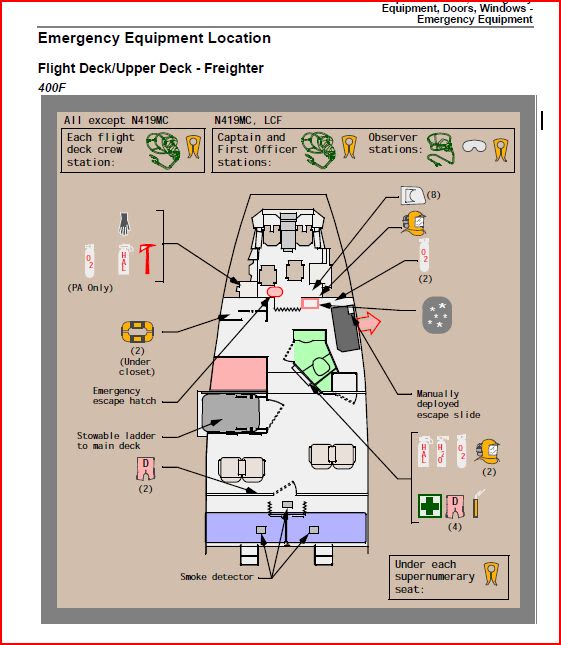 I spent many an hour crammed into the jumpseats of 727's (they have 2, both in the broom closet sized cockpit with 3 crew members). I worked as a cargo handler at the FedEx hub in Memphis and at the time we could book any open jumpseat.

When i clocked out at 4am there were a couple hundred planes just about to depart for destinations all over the world. It was awesome, but alas, no more. It even continued after an off duty pilot with a hammer decided to try and hijack one of our planes from the jumpseat. But 19 jerks ended all that on Sep 11, 2001. There are still non-crew persons in the jumpseat but now you have to have a good reason to be there. It's mostly deadheading pilots but anybody that has an "operational need" for the company can jumpseat. So if they need a mechanic somewhere or something like that they can go.

As far as what jumpseats there are it differs by aircraft. Like i mentioned the 727's had 2 terribly uncomfortable seats in the cockpit. The dc10's I've flown on had one in the cockpit and either 2 or 4 against the bulkhead facing backward. [Think Tom Hanks in Castaway. That was very accurate, you're staring at the first set of cargo containers behind a safety net the whole flight.] In the 747-100 there were about 10 airline seats in the upper deck and two bunks at the back. The 747-200's were the nicest. They were formerly passenger planes so the upper deck still had the first class seating.

Some airlines operate their aircraft in a combination of freighter and passenger aircraft. See here for the floor plan of KLM's Boeing 747-400M Combi. It has a large cargo door at the rear fuselage for loading freight containers.

Humanitarian relief flights have an obligation to carry journalists along if they wish. Some governments have instituted a policy of transparency so the press may observe first-hand where the goods are delivered to.

Yes actually I have an uncle who flew on a c-130 cargo plane to Alaska that was carrying jet fuel if you consider that cargo. The plane he was on was refueling jets in the sky. So yes sometimes they do carry people on planes with cargo. And it usually when its only necessary.

Not the answer you're looking for? Browse other questions tagged faa crew cargo or ask your own question.

0
What's on the upper deck in the picture (circled) of Cathay Pacific Cargo Boeing 747-8F?
3
Why do some cargo aircraft have windows?
13
What is the typical aircrew for a cargo flight?
17
Why did early 747s have only two or three windows on the upper deck on each side?
9
Why do cargo flight companies reposition their crew via passenger airlines?

13
What is the typical aircrew for a cargo flight?
8
Are cargo and passenger flights flown differently?
40
Is 3 crew cockpit safer than 2 crew?
6
Why do we see many more 5th and 8th freedom cargo flights than passenger flights?
7
Do ETOPS requirements vary between passenger, cargo, and non-revenue flights?
10
Is it possible to convert a passenger A380 to carry cargo?
17
Why don't American passenger airlines operate dedicated cargo flights any more?
24
Why do cargo airlines frequently choose passenger aircraft rather than aircraft designed specifically for cargo?
9
Why do cargo flight companies reposition their crew via passenger airlines?
19
What is the upper deck on converted freighter long-hump 747s used for?