Can an airplane fly with greater weight than lift and how? [duplicate]

I just really don't understand how an airplane can fly with greater weight than lift.

There are many situations where the weight is not equal to the lift.

Lift is, per definition, the aerodynamic force perpendicular to the undisturbed incoming airflow.

The weight of the aircraft is due to gravity, hence pointing down.

An example of a steady situation in which the lift is not equal to the weight is the climb phase. During climb the lift is actually less than the weight.

In your comment you mention a weight-to-lift ratio of 5 : 4. If that would be during an unaccelerated climb, the flight path angle would be 37 degrees and the thrust minus drag would have to be 60% of the weight.

The combination of the lift and thrust vectors is equal is size and opposite to the weight vector. It is denoted $W'$ in the image.

For simplicity I left drag out of the image and assumed thrust is purely acting in the direction of travel. 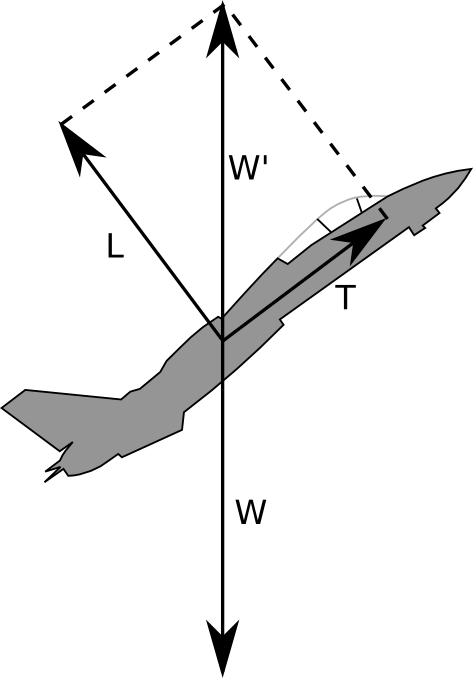 19
Why is lift larger than thrust?

4
How can coefficient of lift on the ground with flaps in the takeoff position be calculated using airfoil data?
3
How to maximize your practical lift/weight ratio in a multirotor?
10
How has weight been reduced in commercial aircraft design and how will this trend continue?
5
Can this design provide more lift force than thrust from engine?
2
How to calculate the amount of weight my plane can takeoff with?
3
Which one needs longer runway of an airplane between take off and landing for a constant weight?
1
How much lift is lost by wing dihedral, and can it be fixed?
4
How is lift transferred from rotor to chassis (or weight, the other way around)?