The Concorde normally cruised at an altitude of 55-60,000 feet, but wasn't allowed to fly over populated areas due to the noise it produces. Can the sonic boom of an aircraft at 60,000 feet be heard on the ground? 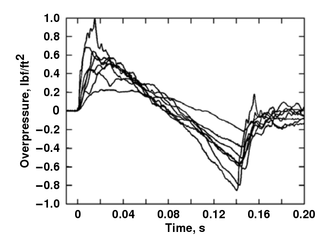 The same wiki page cites a document from NASA

These measurements are from aircraft with different altitude. As sound pressure depends from distance like $p\sim\frac{1}{r}$, one may calculate the pressure for a certain altitude as in the following table. However, this assumes that the aircraft causes the same "boom intensity" at that altitude, which you should doubt at least for the SR-71.

As you can see, the Concorde is the loudest aircraft, the most comparable F-104 (speed, altitude) produces just 40% of its sound pressure. But the F-104 is also much much smaller than the Concorde.

The Space Shuttle is very loud for its low speed. However, it looks more like a flying brick than an elegant, streamlined aircraft, so no wonder that it creates strong shock waves.

The SR71 seems to be very quiet for its speed, but as said, I don't think you can pull it down to 48000ft and expect the same behaviour. However, a sonic boom starts to disperse in some (larger) distance, may be this already happened for the SR-71. (Also, it's a spy plane with a very special shape - may be, this reduces the boom, too).

It has to be said that it is hard to translate the numbers into a comparable sound level, because what makes up the loudness is not only the maximum pressure, but also the rise time.
As counter-example, the air pressure changes by 130Pa every meter of altitude (at ground), and you don't hear the change of pressure when standing up from your chair (~100kPa)

Also, a sudden noise appears to be much louder than a noise slowly increasing to the same level - and the bang has the most sudden wave form possible. (Listen loud music with earphones - when the player clips a second, the first moment after really hurts)

However, there is a long table on Wikipedia listing noise sources and their levels. For example:

These levels are effective sound pressure. To translate a perfect N-wave with given maximum pressure to effective pressure, you have to multiply the value by $\frac{1}{\sqrt{3}}\approx0.577$.

Thus, the sonic boom of the Concorde has an effective value of 57Pa, which is comparable to the trumpet in 0.5m distance.

(As said, there is still a difference, because the boom is a sharp, short noise, but it gives an idea.)

By the way, I just stumbled on another document, about primary and secondary sonic booms. 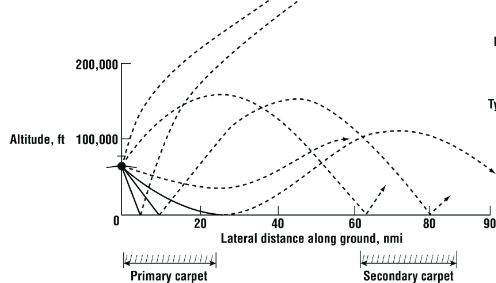 It states that you hear a primary sonic boom coming from the aircraft within a lateral distance of ~20nm (solid lines) as well as a secondary boom within a distance of 60-85nm (dashed lines). This secondary waves are a reflection of the upwards travelling shockwaves from the aircraft at the atmosphere. The secondary boom is not a short, loud bang, but a longer and less intense rumbling, making it difficult to identify the source.

60000 ft is only ~11 miles. That high up the sound actually travels over much larger an area. The space shuttle re-entered the atmosphere much higher than that and you could hear the booms from it very well when it would fly over.

10
How loud was the Concorde's sonic boom at the ground level?
2
What is the maximum speed for regulation of sonic boom noise?
8
At what altitude can the sonic boom no longer be heard at sea level?
-1
From what distance can a man hear and see an airplane flying overhead, without any equipments?

13
Would a perfectly silent supersonic aircraft create a sonic boom?
14
Is there a boomless sonic technology in any state at this time?
8
Can a sonic boom arrive before the source?
6
Is it possible to hear a sonic boom when the aircraft is exactly at Mach one?
2
What is the maximum speed for regulation of sonic boom noise?
5
Why did the FAA ban all supersonic flights over the United States, rather than only supersonic flight in densely-populated areas?